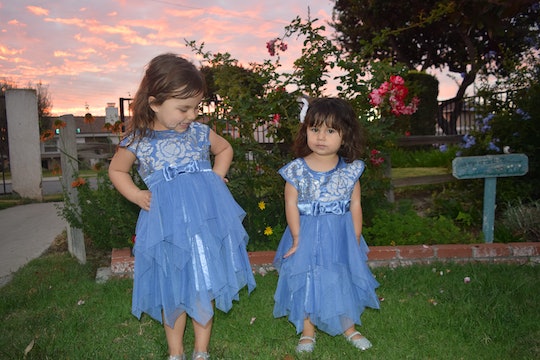 I Dressed My Daughters Like Twins For A Week

I’ve never been one for dressing my girls in matching outfits. When I found out I was pregnant with another girl, I vowed to never force my daughters to dress like twins because I wanted them to have their own individual identities. Plus, I'd heard from many of my friends who grew up with siblings close in age about how much they hated when their parents dressed them in matching outfits. So I didn't purchase any matching outfits for my girls when they were younger because I wanted them to have a chance to create their own individuality.

But here’s the thing: buying matching outfits is so much easier than trying to purchase two uniquely different outfits. Especially when I’m rushing through Target and can easily grab a 4T and 2T off the same sales rack. My daughters have very different styles: my 4 year old is determined to pick her own clothes while my 2 year old would happily wear whatever her sister is wearing, but with the addition of rain boots and a tutu.

So how would my girls react to dressing alike for an entire week? Would my oldest daughter find it annoying to have her little sister wearing the same outfits as her or would she simply add her own flare to her outfits to show off her personality?

My girls do not like sharing anything. So I anticipated some push back from my 4 year old when I told her she would be sharing some of her stylish ways with her younger sister. But she totally went along with it without any fuss. Well, at least as far as dressing alike goes; the hair was another story. My youngest wears her hair in two ways: pigtails or in a high bun. I don't know why. My older daughter loves her hair down so when I suggested wearing her hair in pigtails or a bun for school this day, she flat out said no. It was 7 a.m., and I was not about to get into an argument over hair since I felt like I was already pushing it with the outfit, so I let it go.

Had dressing my girls alike eliminated fighting as well?

Her teachers said the girls looked really cute, and the women at the gym's child time center loved their matching outfits. My daughters appeared to appreciate the attention since they smiled and acted shy in both situations.

My daughter picks out her clothes every day and has very specific ideas of how she wants to look, so on day two so I offered up two twin-inspired choices and let her pick her favorite. Of course, she selected the Shimmer and Shine outfits and luckily, my youngest was stoked on wearing black boots. It was raining on day two so the outfits were perfect for the weather and there were absolutely no tantrums about having to dress alike — with the exception of the hair. This time I actually put my older daughter's hair in a bun but she pulled it down when I left the room to help sister brush her teeth.

That afternoon during a Target run, there was an older couple in the same same toy aisle as the three of us. They commented on how “darling” my girls looked. And my daughter, being the little ham that she is, totally took credit for the matching outfits by saying she "pickeded" the clothes. I noticed a couple of other shoppers smiling at my daughters during this trip, and I'm not sure if it's because they were dressed the same or because the girls were actually being pretty civil with each other. They were even holding hands and not fighting. Had dressing my girls alike eliminated fighting as well?

My girls have very different personalities, which requires me to tweak not only the way I discipline them, but also how I treat them sometimes. On day three, when it was time to dress them alike on Saturday for a family dinner, we rain into a little bit of an issue. My little one wanted to wear her rainbow boots but I tried to distract her with gummies and a packet of applesauce while I sneakily put her feet in the black boots that matched her sister's. My eldest was starting to complain about her sister dressing like her again, so instead of trying to distract her with food, I explained to her that her tia (which means "aunt") bought them these cute outfits and it would make her happy to see them in them. (This was not a lie, we really were seeing my tia that day.)

I promised that once we got back from dinner she could wear whatever she wanted and her sister would not have to dress like her. It worked, but I did feel guilty for making her wear something she didn't want to wear.

Day four made me realize that I actually didn't realize how many matching tops, pants, and dresses I actually had for my daughters. Even though I purchased matching items, I rarely dressed them in the same clothes at the same time or matched them exactly alike. At the very least, this experiment was making use of everything I had in the girls' closets.

Just about halfway through our experiment and my eldest daughter was completely over having her little sister copy her. She went along with it because I told her that the main reason her sister wanted to dress like her is because she really loves her style. I mean, they do say it's a compliment when people copy you, right?

My older daughter didn't want her little sister to dress like her because she “wanted to dress different” and “not look the same.” The little one didn’t care, but I was just over trying to argue with my daughter, who was clearly stating her need for independence by dressing her own way. So I let her wear what she wanted during the day and she wore her favorite dress with her glittery shoes. My youngest wore jeggings, a tutu, and her rain boots. And you know what? They seemed happy.

It was a rainy day so we ran a few errands to the market and Home Depot, but aside from a few smiles from fellow shoppers, no comments on their outfits or remarks on how they looked like twins.

When we got home, my daughter was really excited when I told her she could change her clothes.

OK, so I kind of caved this day and didn’t make the girls dress the same on day five, but they did wear matching-esque nightgowns to bed so I'm counting it as a win. My older daughter didn't want her little sister to dress like her because she “wanted to dress different” and “not look the same.” The little one didn’t care, but I was just over trying to argue with my daughter, who was clearly stating her need for independence by dressing her own way. So I let her wear what she wanted during the day and she wore her favorite dress with her glittery shoes. My youngest wore jeggings, a tutu, and her rain boots. And you know what? They seemed happy. There wasn't any arguing over matching clothes or hair styles, which was really nice.

After their baths, my eldest daughter picked her new favorite princess nightgown and the second her sister saw it she asked to wear her's too. My little one just loves dressing like her sister, and I'm not sure why. The girls have several matching pajama sets (almost all princess night gowns) and usually wear the same ones, but only because the youngest always asks to dress like her sister. To tell you the truth, I think the only reason my preschooler is OK with her sister copying her at night is because no one sees them other than me and their dad. Or maybe she's like me and just too tired to fight little people?

My daughters love the dresses that one of my closest friends sent them from San Francisco, so they were really excited to wear them on day six. When my youngest pulled out her Rapunzel braid to spice up her outfit, my eldest daughter actually wanted to match her sister and ran upstairs to grab hers, which did not really surprise me since they both love wearing those braids any chance they get. Although my 2 year old wore her dress up shoes for a few hours, she did end up taking them off and asking for her rain boots.

I think my 4 year old was OK wearing the same outfit as her sister because not only did she get a break from the twin wear the day before, but she was able to select a dress she really loved — it just so happened it matched her little sister.

At this point in the experiment this whole twinning thing was making my life harder than anticipated. I thought picking out one outfit would make getting the girls dressed and out the door much easier since I wouldn't have to pick two pairs of pants, two tops, and figure out how to style their hair. Instead, I found myself spending more time trying to convince my preschooler to allow her sister to dress like her, To be honest, trying to talk my daughter into matching her younger sister was really hard because I don't fully support dressing my daughters like twins since I'm really set on letting them pick their own clothes as fashion is a way they express themselves.

It was finally the last day of the experiment, so I laid out three outfits: a complete matching set with the same patterned dresses, a pair of black leggings with a pink shirt, or two dresses with the same look but are different colors. My eldest picked the last set and the youngest went along with it, of course, because she loves doing everything her sister does. This time, when I tried one last time to get them to agree to the same hair style, it was the little one who got upset! She didn't want pigtails, or a bun, or a tiny braid. She wanted a hairband, an accessory my 4 year old would never go for so I honestly didn't even try.

The women at the gym told them how pretty their dresses were and instead of acting shy, my little one said, "yeah," and walked into the play area with a little bit of sassiness. Maybe it was the hairband?

After seven days of dressing the girls same I was really glad to no longer have to look for matching anything. Both girls seemed to be happy about being able to pick their own outfits again too, since they happily returned to picking out their own clothes the day after this experiment ended.

My daughters are definitely not twins. They may be close in age but they have never been misidentified as twins by anyone, and dressing them the same didn't change that. But the changes I did notice during this week included how much my older daughter likes to dress her own way and does not want her sister copying her. Of course, sometimes dressing alike is fine, mainly because they were OK with it a few days in a row, but it's definitely not something we'll do every day.

This experiment helped me feel better about my decision to not dress my girls as twins since it's clear that my daughter shows her individuality through her fashion. And I totally get it. Who doesn't feel awesome in a great pair of jeggings — or tutu?