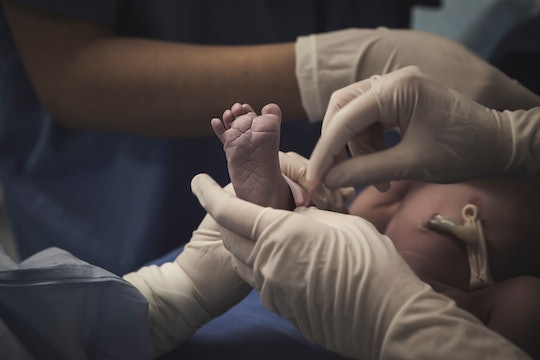 I Had A C-Section & I Absolutely Hated It

I'll admit it: I'm kind of a control freak. Being pregnant and giving birth might be the ultimate test for people like me; aside from taking care of yourself, there's not much you can do to make sure everything goes the way you want it to. I knew that if I was going to have a positive birth experience, I was going to have to work on letting go and letting my body do the work it knows how to do. Still, the last weeks of my pregnancy were some of the most difficult of my life. It was the middle of winter, and I shoveled snow, scraped driveways, bounced on a birth ball all to get my baby to come. I walked on the treadmill, squatted as many times as my knees could take, and visualized my cervix opening until my eyes felt like they were going to fall out. It was the most frustrating, impotent feeling to know that I couldn't just will my daughter to be born.

I tried to tell myself that she would come when she was ready, but I was already two weeks past my due date, and I was beyond sick of being pregnant. Still, I never managed to go into labor naturally; I started leaking amniotic fluid, and had to be induced to avoid infection. I didn't want to be induced, but I'd prepared myself for the possibility. I didn't want to use pain medication, but I accepted that I probably would need it. But the one thing I didn't prepare myself for was a c-section. I wanted to deliver vaginally; I wanted the rush of hormones, the feeling of satisfaction, the experience of holding my child against my chest as soon as she was born. I didn't prepare at all for a c-section, but after a long and complicated labor, a c-section was what I got.

And there was nothing I didn't hate about the experience.

By the time my spinal anesthesia kicked in, I'd been in labor for 19 hours, so not being able to feel pain anymore was pretty fantastic. Also, I was obviously happy and grateful that my daughter was able to come safely into the world. She was transverse, which means she was sideways, and transverse babies are undeliverable. In the days before safe c-sections, women with transverse babies inevitably died, and their babies died with them. Eleven months postpartum, and I'm still creeped out by my brush with mortality.

I knew that if I lost her, it would destroy me.

I knew I'd have to let go of my pride to give birth, and boy, did I. At one point, I was bent over on all fours on the hospital bed, gown open, blood, fluid, and poop leaking out of me all at once, when a poor young orderly tapped on the door to ask if I wanted a breakfast tray. I'm sure she's scarred for life, but at the time, I didn't care who saw me. I was entirely focused on pushing my baby out. When it became clear that wasn't going to happen, my doctor and the nurses started to prepare me for a c-section. First, they had to insert the catheter, which took them 20 minutes because the area around my urethra was so swollen from three hours of pushing. Have you ever had someone try to stick a seemingly impossibly wide tube into your urethra for 20 minutes? It's not great.

Then, after the spinal anesthesia was done and I was laying down on the operating table, the nurse had to shave my pubic hair. I couldn't feel anything, but I could see her shaving me, and the surgeon (a wonderful older man who I know is a doctor and has seen everything, but still) kept coming over and saying, "More. No, more. More. Just get rid of it all!" At one point, the nurse who was shaving me turned to another nurse and said, "She's got a lot of hair down here." Despite what I'd already been through, it was pretty mortifying.

The anesthesia was great, until it wasn't. After my daughter was born, I was able to see her for a couple of minutes before she and my mother, who was my birth companion, were rushed from the room when the surgeon thought he saw a potentially lethal tear in my uterus. It turned out to be just a tear in the muscles of my abdomen, but I spent what felt like an eternity in a silent operating room convinced that I was going to die. Then, when they were in the process of suturing me up, the anesthesia started to wear off. Apparently, this isn't uncommon during a c-section that goes on longer than expected. I was never in agony, but it definitely wasn't fun. You know it's bad when you're wishing you could just go back to the pain of contractions.

After it was finally over, I had the unique and surreal experience of watching two nurses hoist up my legs and put a suppository in my butt. I couldn't feel anything, and it seemed like my legs were across the room from my body. Things stayed surreal in the recovery room, which was completely empty save for me and the nurse who was taking care of me. We had a benign conversation about her son, who's my age, and what he's been up to these days. It seemed anti-climactic after what I'd just been through, and even though she was very sweet, it was weird to feel like I had to keep up appearances and be friendly when I was completely in shock and just wanted to stare at the ceiling.

When I finally got to hold my daughter, it was definitely a happy moment. I don't remember much about that night, except being struck by how tiny her fingernails were. It wasn't until a couple days later that it really hit home for me that I had missed out on the bonding that comes along with the hormones released during labor and delivery. I felt extremely vulnerable, and I was overwhelmed with fear that something bad would happen to her. I knew that if I lost her, it would destroy me. I looked at her and I thought, I will take care of you no matter what. I would die for you. But I didn't feel love for her — or, at least, love how I had previously experienced it — until she was a few weeks old. Friends who gave birth vaginally around the same time as I did were gushing all over social media about their overwhelming feelings of love and connection for their new babies. I felt guilty for not feeling the same way, and cheated that I had missed out on that experience.

I didn't have trouble breastfeeding in terms of my latch or comfort, but I had a very low milk supply. My milk also took a few days to come in, which is common after a c-section. My daughter was nursing constantly, but it was clear that she wasn't getting enough to fill her up. She was a pretty mellow baby unless she was hungry, and when she'd been crying steadily for a couple of hours, I finally gave in and sent my mom to the grocery store for some formula. I was able to breastfeed successfully once my milk came in, but I was never able to pump, which made going back to work difficult. I tried and tried to make it work with the breast pump, but the most I ever got at a time was a couple of ounces. My daughter is 11 months old now, and although I would've gladly nursed her for another year, she has pretty much weaned herself. She just wasn't getting enough breast milk anymore to satisfy her. I can't help but feel that I would have had a better chance at a good milk supply if I hadn't had a c-section.

The thing I hated the most about having a c-section was the recovery. My body has a weird relationship to pain medication. Things like Percocet, Tylenol with codeine, even high-intensity narcotics like Oxycontin, don't really do anything to control my pain. The only thing that works for me is plain old Ibuprofen, but even a handful of Advil couldn't get rid of the intense discomfort around my incision. It's hard enough having a newborn baby without having to struggle in and out of bed in agony, and it's even harder when you're single and it's just you and the baby in the middle of the night.

Like I said, I'm a control freak, and I like to be able to do things for myself. Sitting around and being looked after isn't my thing. Also, if I need to like, move a bookshelf or carry a big sack of potatoes or something, I want to be able to do it! I hated having to be careful about every little thing. I aggravated my internal incision on several occasions, which caused me to bleed internally, which set back my recovery even further.

On top of all that, I couldn't laugh, talk, or cough, without feeling like my internal organs were going to pop out of the giant hole in my stomach.

There's recovery involved in giving birth vaginally, too. But when people tell me want to have a scheduled c-section because they're afraid to experience the pain of labor, I inwardly think that I would've taken the pain of contractions over the pain of a c-section recovery any day. I'm not in the business of judging other women for their birth choices. Everyone should do what's best for them, and whatever works for you works for you should be the thing you do, and that's the bottom line. I just wish I'd had a chance at the birth that I wanted.

More Like This
Here’s What You Need To Know About That Viral 1960s Baby Formula “Recipe”
Gerber's New Spokesbaby Isa Has The Biggest Brown Eyes & Was Born With A Limb Difference
24 Beautiful Baby Names With The Same Vibe As Mila
First Look: The New Jujube x Lilo & Stich Collaboration