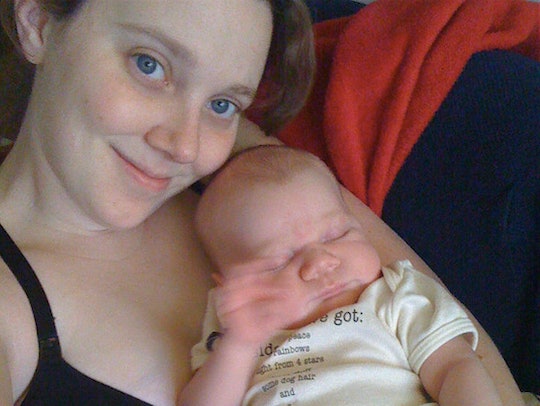 Any woman who has seen a pregnancy to term knows waiting patiently for the baby to arrive is tough. For me, it was especially difficult with my first child. I think that was for a combination of factors: I went past my "due date" (the quotes are because not many women actually deliver on that day), I wasn't busy watching other kids so much as I was staring at my belly expectantly, and I was more nervous about labor and just wanted to get it over with. Like many women who wish to serve their babies an "eviction notice," at my 40-week appointment I began discussing natural methods of encouraging or inducing labor to begin. One such method is "stripping the membranes" or "sweeping the membranes" to induce labor. It was a relatively quick and easy procedure and I remember thinking "what the heck, let's give it a go." But, honestly, if I could go back to that appointment there is no way I would make that decision again.

Having your membranes swept during a vaginal exam entails the practitioner inserting a finger or fingers into the opening of the cervix and running a finger along the inside, which creates a bit of space between the cervix and the amniotic sac. This releases hormones that encourage labor to begin. It's one of the first methods of inducing labor a medical practitioner may want to try to induce labor naturally. Overall, the process is fairly quick and can be done in the office. It likely won't start labor right away, but rather it will increase the likelihood that the woman will go into labor in the next 24 to 48 hours. During the procedure, some cramping and discomfort might occur. Spotting, the loss of mucus plug, and continued cramping or contractions can continue for the next day or two as well.

When I was presented with the option of stripping my membranes to induce, I wasn't really told of the downsides of doing so. The midwife offered it to me as a fairly low-risk way to induce labor naturally. She reassured me if the baby wasn't ready to be born, it wouldn't start labor. It was more like a nudge in the right direction. I was so excited to meet my baby that I gladly decided to give it a go. This was the first vaginal exam I'd received since the beginning of my pregnancy, since there weren't compelling reasons for me to receive them regularly.

The overwhelming thing I was experiencing wasn't just delight over meeting my baby — it was exhaustion.

I was uncomfortable while she was messing with my cervix. I was 2 centimeters dilated and the midwife told me she was able to stretch me to 3. I didn't even know that that could be done. Prepared for the cramping and the spotting, I put in a pad and went home. But from that moment on, I felt even more like a watched pot than I had before. I've always been a champion over-analyzer of bodily sensations, but now it had tripled. Every twinge or cramp and I was holding my breath, excitedly wondering if this was it!?!

The next morning, I woke up and saw my mucus plug in the toilet. It was really exciting. It was a Friday and both of my parents were visiting for the weekend. It was the perfect time to have this baby. When my parents arrived, we went out for dinner with them and my in-laws. We were all officially on baby watch. During dinner, I started having regular but minor contractions. I squeezed my husband's hand every time I had one, and we kept smiling at each other. I went to bed that night so sure that I'd be meeting my baby soon.

It turns out that one possible effect of having your membranes swept is having long and drawn out prodromal labor, which, according to FitPregnancy.com is defined as "contractions and/or other labor signs that begin much in the way that traditional labor does, but that do not result in the birth of your baby." Like my body was kickstarted, but it was half-assing its way through the earliest phase of labor. Friday, in the middle of the night, I was awoken by a contraction that really hurt and took my breath away. Once more I thought, "this is it!" but I was wrong. I woke up the next morning to more mucus in the toilet. This time it had more blood in it and I excitedly thought that this was my baby's literal birth day. Losing a mucus plug and having bloody show are signs that your cervix is opening. Coupled with the fact that I was having painful contractions, I thought I was close.

By the time I called my midwives and they brought me in, it had been five days since my due date. Five days since I had my membranes swept. And I had been unable to sleep for almost three days because of the painful contractions.

I labored all day Saturday. I couldn't sleep through the contractions because they were so painful. And all my excitement made it difficult to sleep anyway. I went to bed Saturday night, very discouraged that I still hadn't started active labor. My partner and my mom were taking shifts sleeping because I needed company around the clock.

I endured another sleepless night. I was so tired the next morning. I labored all day Sunday. I still didn't fully go into active labor. Since my contractions never got to be four minutes apart, I hadn't gotten in touch with my midwives. Looking back, I wonder if I should have called them. They probably would have given me something to help me sleep, to rest up for the actual labor. But it's also likely that once I had any interventions/meds, I would have more, and I was going for an unmedicated birth. (Spoiler: I did end up having an unmedicated birth.)

By the time I called my midwives and they brought me in, it had been five days since my due date. Five days since I had my membranes swept. And I had been unable to sleep for almost three days because of the painful contractions. They did another vaginal exam and I was at 5 centimeters, so they decided I was in labor and could stay at the birth center until my baby was born. I was so relieved. But also, I had only dilated 2 centimeters over three days of hard work. Intellectually, I know those numbers don't have nearly the significance we put on them, but that was disheartening.

It was still another six hours until I reached 10 centimeters, and I pushed for a full three hours. The overwhelming thing I was experiencing wasn't just delight over meeting my baby — it was exhaustion. I hadn't slept in days. I hadn't eaten more than a couple bites of a few fast-food milkshakes (the only thing that appealed to me). The labor and birth were calm and lovely. I really settled into things once I got to the birth center.

With two more labor experiences under my belt, I look at my first birth and wonder what would have happened if I just let things be.

I've had two babies since my first. Both of those labors started on their own. No encouragement necessary. And possibly, it was just because they weren't my first baby, but those labors went so much more smoothly. With my second child, labor didn't start until I woke up for the day, and she was born that afternoon. With my third child, although my water broke before labor started, the time from when real labor started to his birth was only about five hours. With two more labor experiences under my belt, I look at my first birth and wonder what would have happened if I just let things be.

I pride myself in my trust of my body and my babies. When I reached my due date with my first, that trust was wavering. I wish I had never had my membranes swept. Or I wish that the midwife had taken more time to explain the possible side effects (of which extended prodromal labor is one). I do want to give my younger self a bit of a break, though — I was eager to deliver.