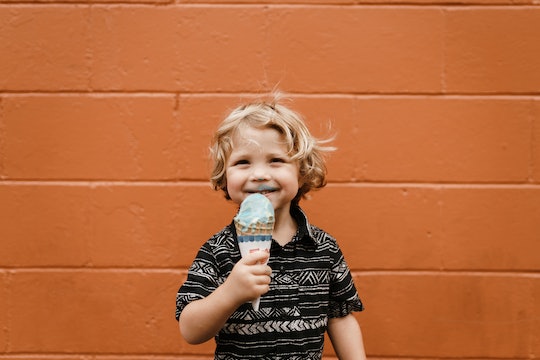 I Have One Rule About The Food My Kid Eats, But It's Not What You Think

The most consistent thing I've learned about myself as a mom, so far, is that it my natural tendencies don't always align with what I logically know to be correct and most beneficial parenting choice for myself and my kid. If I know I'm predisposed to going left, but it's clearly better to go right, I have to work extra hard at going left. I go more the f*ck left than anyone has gone left before. This, somehow, has been more true of my approach to feeding my kid than anything else so far.

Since I historically prioritize my own needs and my own comfort over anyone else's needs, when I was pregnant I decided I was going to breastfeed. In fact, I was going to breastfeed my ass off. (That plan, like most parts of parenting, didn't go flawlessly, but I did work myself into the ground about it.) When my kid started eating solid food, I spent hours chopping and steaming organic vegetables. He was going to eat cleaner than any baby had ever eaten, and he was going to develop a taste for real food and not junk.

That approach has more or less stayed consistent over the last five years. And the whole time, as I've been rigorous about keeping our house free of sh*tty food. I'm not a monster, mind you. We go out for ice cream or pizza sometimes, but it's very much the exception, and even then, I dare you to find any fake sh*t in what we end up ordering.

Look, I get that this all makes me sound like a privileged and annoying asshole. To a degree, that's true. Sometimes I am those things. A lot of families don't have access to super healthy food (or even enough of any food), but I do. I also worked a not-insignificant amount to go from being poor on the outskirts of Atlanta to being relatively comfortable in Brooklyn. So my kid's nutrition is damn sure going to make the years that hard work added to my face worth something.

My insistence on maintaining some basic standards around how my kid and I eat is largely fueled by two things: I spent my entire 20s getting my body cleansed and reprogrammed from the wholly inadequate and unhealthy eating habits of my childhood, and it was a lot of work. I realized how sick and generally bad I felt as a kid as a result of how our family ate. I'm also just kind of an anxious person, so if I'm going to care about something, I'm going to care about it in an almost obsessive way where deviation is kinda hard for me to deal with.

So all of the above is, broadly speaking, how we eat at home and why. There are lots of little preferences and best intentions, but within all of that, I only have one real "rule" for how my kid eats:

I'm not going to try to control what he eats when he's not with me. I refuse, for everyone's sake.

Granted, I'm obviously fortunate in that my kid has no food allergies. He can eat basically anything with no consequences, aside from a bad sugar crash or puking in a cab (it's happened twice in his five years of life). And since I don't have to tell every aunt, uncle, grandparent, and friend's parents when he goes over for a play date what he can and can't eat, I'm not going to.

First of all, I would rather throw myself into the darkest part of space than be That Mom who wants an itemized list of what her pristine kid is going to be consuming while he's away from her for a few hours. So there's that. I just don't want to hate myself, or be someone who dedicates more energy than is healthy to any relationship. You can't micromanage even your kids' lives, ya know? And I'm somewhat of a controlling person by nature, so this rule really sets a boundary that I think is important for me: I can be rigid about healthy eating when he's at home, but when he's not in my care, it's not mine to worry about.

I spent my entire 20s getting my body cleansed and reprogrammed from the wholly inadequate and unhealthy eating habits of my childhood, and it was a lot of work.

I feel confident about this for a few reasons. For starters, I'd like to think that I'm discerning enough about the adults I entrust with his care that I'm not turning over temporary food decision-making power to people who are going to give him 17 Fruit Roll-Ups. But mostly, I trust that in all the little decisions I've agonized over since he was born, I've given him five years to establish a very healthy foundation that can handle a little artificial food coloring from time to time.

That's why I was so concerned with him eating healthy since he was a baby: Not so he would be confined to a perfectly clean diet forever, but so his body would be strong enough to handle anything once he was old enough to go out into the world, which at age 5, he is to ever-increasing degrees.

I was the opposite. I didn't have a healthy diet in my early years of life, and as a result, not only was I often sick and plagued with bad skin and hair and any number of random mental and emotional things, but even as an adult who's eaten hella clean for a lot of years now, I'm still ultra sensitive to garbage food. And that sucks. I might accidentally eat something my body doesn't like and get a migraine. I might just feel awful where other people feel perfectly fine. Is my childhood diet entirely to blame for me being this way? Who knows. Probably not entirely. We are who we are because of any number of factors, including random chance. But I sure as hell know my diet as a kid didn't help. Moreover, I know that an aggressively healthy diet will make my kid stronger and more unshakable by a world that is packed with things that will shake anyone who's even a little able to be rattled.

So that's how we do it. He gets lied to and told that blueberries and frozen water are "popsicles" at home, and then he gets to go bananas when he's with his grandparents and gets ice cream from a truck with pink gumballs for eyes. I'll be the boring mom forever so he can enjoy the big, exciting, preservative-filled world with as impenetrable of a body as possible, even if it means him feeling betrayed by me when he finally learns about Taco Bell.

More Like This
If Your Kids Love Their Elf, You Don't *Have* To Put Him Away On Christmas
Festive Mommy & Me Holiday Nail Ideas To Try
101 Advent Calendar Activities, From Books To Read To Cookies To Bake
The 4 Main Parenting Styles & Which Is Best For Kids