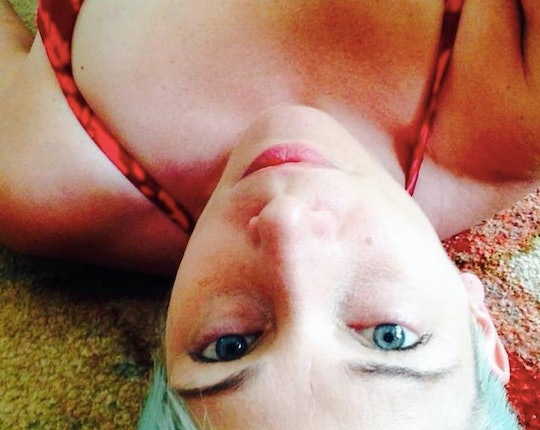 I Have Skin Cancer & Now I'm Terrified For My Kids

Every mom I know is thrilled that the weather is getting warmer and they're finally able to send their kids outside to play. Meanwhile, I am panicking. A few months ago I found out that I have skin cancer, and now I'm terrified that my kids will get it, too. Worse, I am afraid it will be my fault for failing to protect them.

This season marks the first summer since my skin cancer diagnosis, and it's pretty much all I can think about. I used to love being outside — training for marathons, gardening, lying on beach, feeling the sun's warmth on my shoulders while I chased my kids around the yard — but now I view the sun through an entirely different set of eyes. The giant orange orb in the sky is now something to be avoided, so I will welcome it back after a hellish winter, sure, but ideally from inside my house, in the shade, or under a wide-brimmed hat. The sun is my enemy... capable of killing me, and maybe my kids.

Before my diagnoses, I didn't understand much of anything about skin cancer. I mean, I am pretty sure most people don't really think about cancer until they have to, right? I was used to the annual routine of Pap smears and breast exams to screen for cervical and breast cancer, but I had never thought about skin cancer, and I certainly never thought it would happen to me.

Then my sister went to a dermatologist to have a spot on her face checked out. At her appointment she learned the spot was a form of skin cancer called a basal cell carcinoma, which is pretty common and, fortunately, rarely deadly. After we all took a large sigh of relief, my sister made me promise to see a dermatologist, too. I promised, but since I was pregnant at the time and my plate was full, I put it off for months.

I held my breath while she looked at every square inch of my body under the harsh florescent light.

When I finally went in, I thought the entire visit was no big deal. I would have them check me out, I would go home, and I would continue on with my life. But while I waited in the exam room I read a poster that outlined risk factors for skin cancer — pale skin that burns easily or freckles, spends time outside, light-colored eyes, blond or redhead, moles. I realized I had every factor on the list, except using indoor tanning beds. Suddenly my visit didn't seem so nonchalant.

Like my sister, mom, and grandma, I am pretty much covered in freckles and moles from head to toe. When I was a kid, I imagined they were stars and traced constellations on my arms and legs. The skin in between is a contrasting pale ivory, which turned red in the summer, but never the golden tan I tied to achieve. I spent the summers of my youth perpetually sun burnt, despite using sunblock.

I lost an inch and a half of skin that day, and any love I once had for the sun.

By the time the dermatologist came in, I was panicking. I held my breath while she looked at every square inch of my body under the harsh florescent light. She stopped at a spot on my back, asking cheerfully, "Has this mole always looked this way?" and, well, I couldn't answer. I didn't think it had always been that big, or that dark in color, and I couldn't remember if it had always had a jagged edge on one side. Still, it was on my back and I didn't look at my back every single day. She recommended a biopsy, and for a split second it was hard to breath. I texted my husband to let him know I would be a bit longer, but, still, I thought it probably wasn't a big deal.

The spot went much deeper than she thought, and had spread below the surface of my skin. I lost an inch and a half of skin that day, and any love I once had for the sun. The biopsy came back three days later and I was diagnosed with stage one melanoma — treatable with surgery to remove the cancerous cells, but deadly if left untreated. I scheduled surgery immediately. Now I have a four inch-long line of stitches across my back, framed by moles and creamy skin.

I waited three more days before I answered another phone call, but this one was much happier. I had clear margins, which means they got it all and the pathologist saw beautiful, normal skin cells out around the cancer.

I've since learned a lot about skin cancer, how to prevent a re-occurrence, and how to protect my kids from harm. I am terrified, though. I had no idea that every sunburn I experienced as a child increased my risk of cancer — especially melanoma. I also know that because I have skin cancer my kids are even more at risk. I constantly review the statistics in my head. Five sunburns doubles your risk. Five. I've probably had 100, maybe more. I know each of my kids, except the baby, has had at least one.

When we do go outside, I cover all of us in thick, white sunblock at least 30 minutes beforehand, but in the back of my mind I'm constantly wondering if it is enough.

Our culture tends to associate tan skin with being healthy — constantly selling us the benefits of tanning beds, bronzer, and self tanner — but it's really not. It's actually a sign that your skin is being harmed by radiation, maybe irreparably so. According to the Skin Cancer Foundation, 86 percent of melanomas are caused by sun exposure, and are often preventable. And while it's the rarest form of skin cancer, it's also the deadliest, and will kill over 9,000 people this year alone. I don't plan on being one of them, even if it means never going to the beach again.

I also want to do what I can to protect my kids, so as the weather has grown warmer I have grown more anxious and paranoid. I try to avoid situations in which my kids have to go outside on sunny days, and decided not to set up the pool in our yard this year. I don't want to shelter my kids, or prevent them from enjoying summer fun, but I am scared. I want to protect them.

When we do go outside, I cover all of us in thick, white sunblock at least 30 minutes beforehand, but in the back of my mind I'm constantly wondering if it is enough. And each night, before they fall asleep, I trace the constellations of freckles on their arms, and wonder if the moles on their backs will become cancer one day, too. I also check my own moles on a semi-regular basis, noting any changes in size, shape, color, or feel.

I don't want to leave my kids without a mom, either.

May is skin cancer awareness month. For more information on how you can reduce your risk, protect your kids, and detect cancer early when it's most treatable, check out the Skin Cancer Foundation.