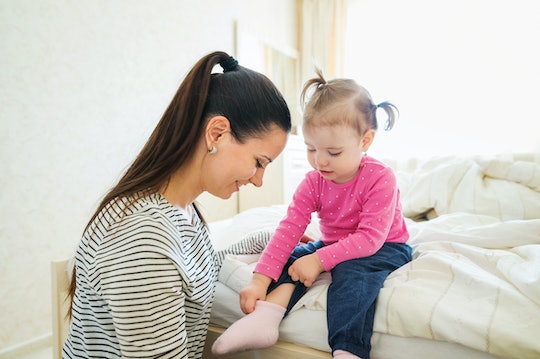 I Let My Daughter Start Dressing Herself & It Was Revolutionary

When my due date with our daughter came and went, and I still hadn’t given birth, people started to worry for me. Not because I was late, but because she was now going to be born under a different sign: Scorpio. Everyone warned me about Scorpios, saying they were difficult, willful, and they always insisted they were right. Guys, that's my daughter. So when it got to the point that my child was making life hell over a pair of socks I had picked out for her, I started to let my daughter dress herself. (It should be noted that my sign is Cancer and I bristle at confrontation.)

I never wanted my kids, especially my daughter, to put too much emphasis on appearances. There is enough scrutiny of the female form as it is, and I wanted to try to teach my kids that it’s what is inside that counts. But I realized I couldn’t totally dismiss the outside either, and choosing our outfits is how we express ourselves. My child didn’t always have the vocabulary to articulate her evolving thoughts about the world, but she had a choice of clothes was able to draw from. She could show us all what made her happy, which just so happened to be magenta hearts and leopard prints.

A lot was set in motion when I started letting my daughter dress herself, beyond making our mornings easier. Here are a few things that happened: