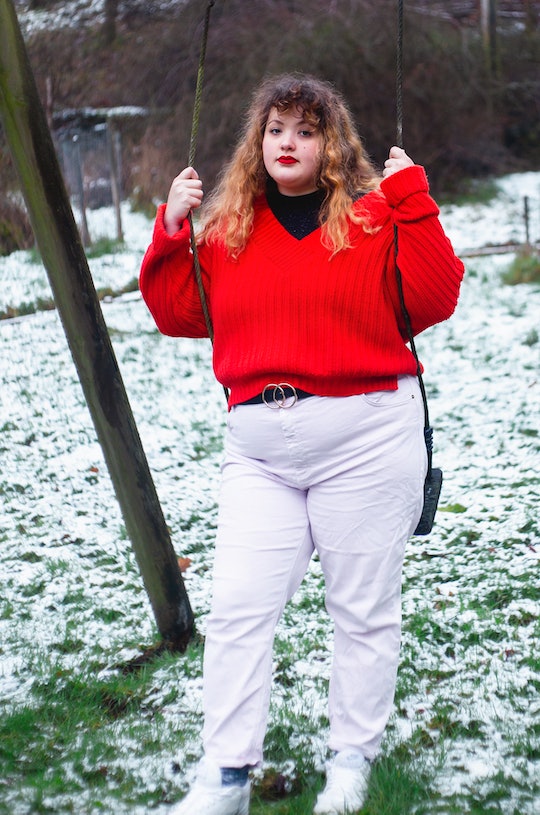 The last time I made it out dancing (an extremely rare post-baby achievement), a friend pointed at the tatty faux leather handbag on my shoulder, letting loose a light-hearted giggle. "You look like such a mom," she said. She wasn't being cruel, per se, just observant. The small vintage cross-body from the '80s actually had been my mother's before I happily inherited it 35 years later. It was the perfect size for me. In it, I could fit all the essentials for a night out: purse, phone, lipstick, and a manual breast pump. For a nursing mother, drinking all night often goes hand-in-hand with pumping and dumping, after all.

At 28, I’m now a mother to two little girls ages 2 and 1. Parenthood wasn’t necessarily something I expected to participate in before my 30s, but nonetheless, here I am. In truth, being a mom has ended up changing my life for the better in ways most unexpected. My day-to-day routine is so filled with the minutiae of raising small human beings, for example, that I don't usually have time to be as chronically anxious about everything else. Having kids also inspired me to move where I wanted to move, to strive for a different kind of work-life balance, and to finally distance myself from certain toxic relationships.

It has also changed my style, though. When I found out I was expecting my first daughter, I remember promising myself that I wouldn’t fall into the culturally presumed black hole that is "mom-wear." That is, that I would not suddenly step into styles associated with growing older, more "responsible," and maybe even kind of boring before I was ready — just like I wouldn't give up drinking with friends on Friday nights or spontaneously going to the theater.

Then I actually had my first kid.

Before I knew it, the promise I’d made to myself regarding clothing had become irrelevant (as did the ones about Friday drinks and theater trips). My skinny jeans were slowly replaced by baggier, high-waisted denim. Loose-fitting tees made their way into my wardrobe as form-fitting bodysuits were cast aside. Oversized sweaters became a sartorial must-have. Not only were they perfect for the year-long Yorkshire chill, but they could easily be thrown on during the morning rush: the hours between 6 a.m. and 11 a.m. that revolve around being woken by infants, changing those infants, making sure said infants are fed and cleaned, while somehow trying to feed and clean oneself. It probably goes without saying that I don't always have time for a full face of makeup now, either.

Weirdly enough, however, I became a mother at precisely the same moment that fashion decided mothers have been cool all along. "Mom-wear," or "mumsy fashion" as it's called in the UK where I live, is kind of taking over retail.

Sites like ASOS, Topshop, River Island, and many more have become inundated with it. Between 2016 and 2017, searches for "mom jeans" actually increased by 227 per cent, Woman’s Day reports. Worn by celebrities like Winona Ryder and Drew Barrymore in the '90s, totally shunned by the low-rise crowd of the early 2000s, and now embedded into the contemporary wardrobes of Kendall Jenner and Gigi Hadid, these untapered, high-waisted wears have seen both rock bottom and glory days. As of 2018, however, high-waisted jeans remain the most searched-for variety of denim in the UK, and the "triumphant comeback" of the mom jean has been confirmed by The New York Post and described by Vogue as something that’ll "never really go out of style [...] because they’re timeless, flattering, and democratic; everyone can find their perfect pair."

All of this has coincided with the rise of other stereotypical "parent-wear" in the mainstream. Suddenly, "dad" became the epithet before many a trend, like "dad caps," "dad hiking sandals," and of course "dad sweaters." If you can believe it, "The Knit Sweater Just Got Sexy" is an actual headline that ran in Vogue last year. Oversized sweaters got even more supersized when designers like Chloé, Victoria Beckham, and M Missoni walked them down their runways. All the while, since 2014 in fact, women’s sites and influencers have been touting the "lazy girl trend" as something de rigueur: minimalist, no-fuss fashion that you’d probably call "comfortable" before "chic," but that apparently becomes "chic" as a result.

I can never shake the feeling that they are perceiving me as sloppy as they gaze upon this person who used to rock perfectly-lined lips, vintage-inspired dresses, and platform boots daily.

For some reason, however, my new "mom style" hasn't always been received as well IRL as all of this — particularly when I'm in the company of my child-free friends or fellow parents who somehow still look Instagram-ready at all times. I can never shake the feeling that they are perceiving me as sloppy as they gaze upon this person who used to rock perfectly-lined lips, vintage-inspired dresses, and platform boots daily. This person who is now frequently lost in a sea of loose-fitting cotton and whose clothes are regularly covered in something unsightly. Could it be baby food? Spit-up? Those markers that are supposed to be washable but never actually are? Or, worst of all, poo?

It didn’t take long to realize that there is a distinct difference between mom-wear as worn by Kendall Jenner or Taylor Swift, and mom-wear as worn by so many IRL women navigating motherhood: the good, the bad, the ugly, the poop-stained, and everything sticky in between. By those who, like me, have limited funds, no access to a stylist, and very little free time during which to get hyper-made-up.

The styles may be similar, but what they evoke seems undeniably different. Where Jenner or Swift may rock a mom jean and look cool, laid-back, and sexy, I tend to rock a mom jean when I haven’t slept more than three hours a night for weeks, when I can’t be bothered to put the little energy I have into coming up with a memorable ensemble, or when I just want to feel comfortable while preparing to chase a toddler and nurse a baby all damn day.

In a now-iconic 2003 Saturday Night Live sketch, the cast put together a little advertisement for mom jeans in the lead-up to Mother’s Day. "Cut perfectly to fit a mom's bum," they said. Ideal to wear anywhere, "from a soccer game to a night out on the town," they mused. "Give her something that says, "I’m not a woman anymore. I’m a mom."

I do understand the critique here. Certain styles are imposed upon mothers from the moment we create another human, with little to no availability of anything different. It starts with maternity fashion: often ill-fitting, shape-concealing, poorly-constructed garments. The message seems clear: you have served your purpose as a woman, and no longer deserve to feel beautiful, sexy, or interesting.

Our cultural distaste for "looking like a mom" is rooted in ageism first (after all, having children is associated with getting older, and getting older — especially if you’re a woman — is typically thought of as a bad thing).

Nursing-wear is arguably even worse. When I started breastfeeding, the struggle to adorn my body in anything not-frumpy was very real. Then there's "mom-wear": the intentionally baggy aesthetic that doesn’t always accentuate the figure in ways thought of as "flattering." These are styles that, like SNL pointed out 15 years ago, seem to presume mothers are not preoccupied with anything other than carpools and bake sales. They are styles we are taught to correlate to "giving up" or "letting ourselves go," perhaps for their lack of mainstream sex appeal.

While I agree that the imposition of "mom-wear" onto mothers is a problem — at the end of the day, anyone, regardless of their parental status, deserves to put whatever they want on their body — I cannot help but feel there is also something redeemable to these styles; something to be said about their sheer practicality. Clothing you can put on and take off in one easy sweep, clothing that you don’t mind getting messy, wrinkled, or dirty, clothing that you can still dress-up when the need or desire arises.

I’ve come to believe that our cultural distaste for "looking like a mom" is rooted in ageism first (after all, having children is associated with getting older, and getting older — especially if you’re a woman — is typically thought of as a bad thing) and a type of FOMO second. Like, if we don't dress ourselves up, we'll be far more inclined to stay in rather than to go out. And, as per social dogma, staying in is a symptom of personal devolution.

As I consider my own life, however, I have come to a few conclusions. I am getting older, and funnily enough, I am grateful. I am grateful to have more confidence as I approach 30 than I did at 16. I am grateful that I have surrounded myself with people who lift me up, rather than tear me down. I am grateful to have children; children who don’t ultimately screw up my world, but enhance it (except for the lack of sleep, for this is not an enhancement).

I am also grateful that I have learned to experiment with fashion as fully as I so please. Today, I know that I am free to wear my mom jeans and dad sweater one day and a form-fitting mini dress the next, even if I most often opt for the former. The thing is, I'd happily "look like a mom" any day. Because I am one, and because I am not ashamed of everything that goes into fulfilling this monumental role.