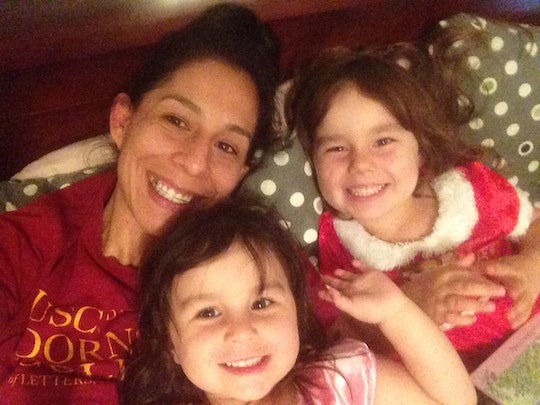 Trying to figure out what sets off a tantrum can be tedious. Sometimes, I can figure out the reasoning behind a tantrum immediately: if my kids have gone too long without eating, if they're not getting enough sleep, if the dog licked their faces. In these situations, I am pretty good at stopping a full-on meltdown. But other times, I am completely lost, like the time my 2 ½-year-old threw a fit because I'd put the strawberries next to the watermelon on her plate, or when my 4-year-old could not deal with the thought of the dogs belonging to all of us as a family and not solely being her dogs.

To figure out exactly what causes my kids to throw tantrums, I decided to spend a week recording everything that makes my toddlers throw tantrums, an experiment that was loosely inspired by the Tumblr blog Reasons My Son Is Crying. Almost immediately, I realized I'd have to step up my problem-solving game.

Reason #1: My 4-year-old’s glider plane got stuck on the roof.

On the first day, the girls were playing with two little glider planes they'd received in a birthday party gift bag when one flew directly onto the roof. My little one said she would go get it, but her older sister said, “No one will ever be able to get it, ever!” and ran inside the house. It was very dramatic and I had to ask her to breathe while I explained that sometimes, balls, kites and little planes end up on the roof, but maybe a big gust of wind would push it off the roof one day. "Maybe the neighborhood cat will help us out and nudge the plane off the roof," I told her. This worked, because she started to laugh and she forgot all about the plane.

My older daughter is obsessed with cats, and she's always trying to be one. She really wants a cat, but since I’m allergic to cats there is no way that we are getting her one. We gave her a stuffed cat (Dreamy from Disney's Sleeping Beauty) and we let her pet any neighborhood cat that comes into our yard, but recently she’d been dressing as a cat and asking us to call her Rosie. I have no freaking idea why.

This week, she decided she wanted to be a real cat. When I told her she was a human and not a cat, she was not having it. I told her she could pretend to be a cat, and we could pet her and treat her like a cat sometimes, but nope. I could not solve this one, so I just let her calm down on her own.

Reason #3: She stepped on my foot.

It was close to bedtime, and everything was setting off my oldest daughter. At one point, she stepped on my foot and she started crying because she thought I was mad at her. Even after I told her I wasn’t, she just kept saying that I was. I promised her there was no way I was going to be mad at her for accidentally stepping on my foot, but she was so upset. All I could do was tell her I wasn't mad and give her a hug, but she didn’t believe me, which made me feel horrible.

Reason #4: My youngest was upset that her sister was not sharing her new erasers, and my oldest was mad that she had to share her erasers

When it comes to teaching my girls how to share, there is no way to make them both happy. As an only child, I struggle with teaching them to share, because I've always believed that some things should belong to just you. For instance, my daughter just purchased new donut-shaped erasers for school, and the youngest wanted them.

Personally, I don’t believe my daughter should have to share her school supplies, since they are hers and hers alone, but she wanted to use her little sister’s ice cream erasers, so I figured it should go both ways. That did not make either of them happy, and eventually, they had to take a break from the erasers and play with something else just so I could get the crying to stop.

Reason #5: The little one wanted to come down from her high chair, after she had just explicitly asked me to put her in the high chair.

OK, what? Seriously, why would she cry the second I give her what she wants?

My little one was not eating her dinner of chicken and cucumbers. She refused to eat, and when we told her there was no way she was getting something different, she had a meltdown and started to throw her food. Of course, we ended up giving her chicken nuggets, since we didn’t want her to go to bed hungry, but I was not happy about it.

My daughter had specifically asked for a turkey and cheese sandwich, but then she refused to eat it because she thought it was "scary."

For some reason, my little one wanted to rub the fork prongs close to her eye. (Seriously, why do toddlers love to shove things up their nose or place sharp things by their eyes?). We told her to get the fork away from her eye, and when she didn’t, I took it away from her. Judging by the sound of her screams, the neighbors probably thought I was torturing her, but nope — I was just trying to prevent her from gouging her own eye out.

Reason #8: We took away her archery set after she told her sister that she was going to hit her in the face.

My youngest daughter has a Merida bow and arrow inspired by the movie Brave, and I had to take the bow and arrow away after she threatened to hit her sister and the dogs with it. This was after I told her that if she said that again, I’d take the toy away from her, and there was no way I was going to wait until she hit one of them in the face.

My little one is all about testing boundaries these days, so I believe that when it comes to disciplining her, follow-through is important .I explained to her that I had to take it away from her, since she was not listening to my words. She was not happy and ended up throwing a little fit.

Reason #9: The food was too scary.

My daughter had specifically asked for a turkey and cheese sandwich, but then she refused to eat it because she thought it was "scary." Of course, I offered her a peanut butter and jelly sandwich instead, because I wanted her to eat, but "scary"? Turkey and cheese? Really?

Reason #10: Her sister stepped on her foot.

My older girl was upset that her younger sister had stepped on her foot, because she thought she had done it on purpose and wanted an apology. (To be clear, her sister was barefoot and she was wearing shoes, so there's no way in hell that it possibly could have hurt.) The little one was upset that she had to apologize. I told them they both needed to work it out themselves.

I was almost ready to start throwing a tantrum of my own.

Reason #11: My daughter's friend was not at the gym and she wanted to stay until she arrived.

My daughter is apparently friends with a little girl at the gym day care, but when we went this week, she was not there. My husband and I tried to explain that maybe her friend was on vacation and that was the reason she was not there, but my daughter pouted and cried, “I want to see her today and I don’t want to leave.” Sorry, but there’s no way I’m sticking around the gym waiting for a little girl (who I’ve never seen, by the way) to show up.

Reason #12: She did not want to swim with us because she feels we are giving her a swim lesson.

Both of our girls are in swim lessons, and they have a love/hate relationship with them: they enjoy the free time in the pool, but they dislike the one-on-one instruction in the morning, because it requires them to put their faces in the water. They'll do it with their teacher, but they won't do it with us. So when we were playing in the pool and I made my daughter put on a Puddle Jumper, she was having none of it, because she thought I was trying to give her a swim lesson. I tried to compromise by letting them swim half the time with a Puddle Jumper and the other half without, but she was still suspicious that I was conspiring to give her a swim lesson.

I realized something important: I will never have a solution for every meltdown and tantrum, so I shouldn't pretend that there is one.

My 2-year-old loves to play dress-up as much as her older sister does, but she isn’t the best at not using items I deem off-limits. This weekend, she put on my sunglasses and dropped them. I told her to give them to me since she wasn’t supposed to have them in the first place, and she was not having it. She clenched the glasses in her little hand and told me I was being naughty. There’s no way to compromise in a situation where set boundaries have already been crossed, so I just took them away from her.

After recording the myriad reasons why my daughters throw tantrums, I realized something important: I will never have a solution for every meltdown and tantrum, so I shouldn't pretend that there is one. Sometimes, I have to accept that I cannot provide a rational answer or compromise that will make my girls happy, because they are behaving irrationally — and that's OK, because after all, they're toddlers, so they're not expected to be rational in the first place.

This experiment also helped me realize how quickly I need to think on my feet and lean on humor and distraction whenever possible. Every time I tried to distract them with a joke, it worked and they started to settle down. This is a great tactic, because I'd much rather hear my girls laugh than cry, but I also understand that they're not going to stop throwing tantrums for no reason anytime soon. It's all part of growing up.