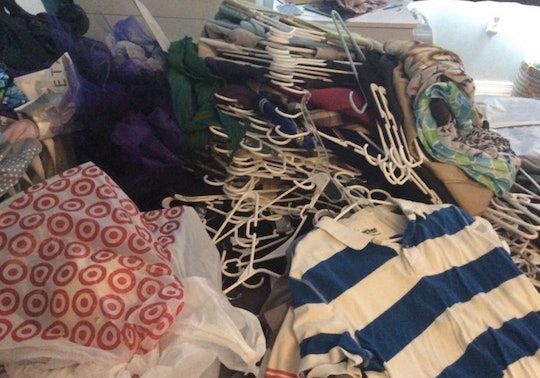 I Renovated A Room In My House In Just A Day, & This Is What Happened

Like many couples, when my partner and I purchased our condo four years ago we had lots of grand plans: decorating the living room to look like Indiana Jones’ office, replacing the counters and cabinets in the kitchen, and renovating the basement with a steampunk look complete with a bookcase serving as a secret entrance to the laundry room. Although we’ve managed to make a few of these changes to make this space our own (sadly the basement is still stuck in the 21 century), the closest we’ve come to home improvement recently is watching Property Brothers together.

Having two toddlers makes it hard to find time for house projects, especially since the kids make it their sole mission to destroy everything. Lately my priorities are trying to keep crayon off the walls, not changing the paint color. But just because we’re parents doesn’t mean we don’t like having nice things, so we came up with a half-baked plan to renovate part of the house in a single day, and decided our efforts were best spent somewhere the kids couldn’t immediately wreak havoc: our master closet.

Could we demo, purchase, and assemble an entire closet system in a single day without a babysitter, trip to the emergency room, or a call to a divorce lawyer? Because my partner and I are usually strapped for time — chasing two 2-year-old toddlers around 24/7 doesn't exactly leave room for "free time" — we drafted a plan to take us from chaos to comfort that would only span the course of a 24-hour period. I figured that a plan like this was like ripping a Band-aid off: quick, a little pain, and over as soon as it started.

I knew that none of us (me, my partner, and the kids) would want to take on a two-day mess (or a renovation that would take even longer). Plus, a plan like this would force us to be purposeful with our decisions and actions, and not waste time debating the little stuff. And with the boys in tow, this was really the only way to make it work.

Sleep deprivation is a funny thing. Having young kids who don’t always sleep through the night makes some people cranky, but for me, when I’m woken up at 3 in the morning by a request for a binkie, I find that instead of being grumpy over the fact that I can’t fall back asleep, I’m happy to play around on the Internet.

I was browsing the IKEA catalog online, looking for storage solutions for the toy fungus spreading across my basement, when I looked up and saw my closet door was open. I noted for the 1,000 time that our clothes were crammed onto a single pole and our gym equipment and dirty laundry cluttered our bedroom floor. And that’s when it hit me: We should totally put in a system to create more space.

When our other son awoke about an hour later calling for daddy to come “fix” his blanket, I shared my plan. Maybe he would have said yes to anything if it meant that I would stop talking and let him sleep, but my husband actually agreed. He even agreed we could do it that very day. I drifted back to sleep dreaming of a line of sweaters hung in rainbow order.

6 A.M. To Noon: Forming A Plan Of Attack

As usual, the kids were up early, but instead of bribing them with an iPad and an episode of Daniel Tiger so we could doze, we got up to start taking measurements and figure out what we would need to buy from the store. (We still totally bribed the kids with cartoons, FYI.)

Almost immediately, we hit a roadblock: he didn’t want to paint, but I did. In the name of compromise, I folded, giving up my Martha Stewart-inspired dreams. We piled into the car and headed down to IKEA. It was here that I really appreciated how my husband and I share the same love of lists and organization. Without really discussing a plan of action, we both knew I’d take the kids to get a snack while he ran to grab the basket and shelves; we’d meet in warehouse after so we could get the rest together. We left giddy with excitement and a little buzzed off cinnamon-bun icing.

When we got home, it was another game of divide and conquer: I’d feed the kids, he’d get the remaining tools ready. No sooner was our plan in motion when we hit yet another wall — literally. Turns out we did need to paint, much to my husband’s chagrin. While he pouted over the extra work, I left him with the kids and slapped some spackle on the walls.

Up until this point, I was surprised at how smoothly the project was going, even though we had to watch the boys too. It was a lot easier than I thought it would be, and it involved much less yelling than anticipated. We can both be stubborn and want to be right about everything, but because we wanted to get this done as soon as possible we were putting aside our need to be right in order to move the project forward. I would have thought having kids would slow this project down, but making quick decisions was actually helping to speed it up.

Ever the team, I volunteered to work on the closet while he tossed in a pizza and played with the kids. Our strategy made me appreciate that I could count on my husband to keep the kids alive and handle making dinner without feeling like those tasks were on me solely since I’m The Mom. Though I like to bake and I’m pretty girly, sometimes I worry about raising my sons to be good feminists with me as their role model. I realized that there are a lot of ways my husband and I defy the stereotypical gender roles in order to do the things around the house we enjoy. We divide tasks according to who wants to do it more or is more skilled at it rather than who’s supposed to do, it. I’ve never appreciated that about us until now.

We hit the pause button to eat dinner and bathe the kids and put them to bed, which worked out well because our project was on hold anyway while the paint dried. Thanks to the wonder that is sleep training, our boys were in bed and quiet by 7 p.m., which gave us three hours until we had to stop using power tools per our condo association rules. We thought this would be easy -- we had directions, no babies around to swallow a screw, and two advanced graduate degrees between us. We would be done and enjoying our dessert with a side of Netflix by 10 p.m., right?

We opened up the instructions to find that they contained directions not just for the closet system we had purchased, but for each and every closet system IKEA sells. Trying to figure out which pages contained the information we needed was like an LSAT logic problem, but worse, because the fate of my shoes hung in the balance. We finally managed to piece together the parts of the booklet we needed, and then realized that the screws we’d purchased wouldn’t work. After we picked up the correct screws, my husband then drilled a hole directly through our wall.

I realized I had two choices: get mad at him for something obviously didn’t mean to happen, or laugh about it because we were two nerds who never took shop class doing our best. I’ll admit my first instinct was to get angry: Wasn’t he just supposed to know how to do this stuff? Instead, I plastered on my best fake smile and told him it was a mistake, while really hoping the screw was just lost somewhere in the insulation between the condo units and not sticking out of my neighbor’s bedroom wall.

We managed to get the screws in and the system installed without ruining the house, and with a few minutes to spare, but I couldn’t help but wonder how different the night would’ve gone had I had blown up when that first screw went through the wall. Maybe it was the paint fumes, but that moment of clarity really hit me: He was just doing his best. There are plenty of times as an adult and especially as a mom when I feel like I don’t know what I’m doing, but I’m trying my hardest, and I forgive myself for mistakes because I know I’m putting in the effort. Seeing my husband living his life the exact same way allowed me to examine our relationship through new eyes. I’m working on trying not to let little things bother or annoy me and remembering that we’re both doing the best we can.

Would I Ever Recommend Another DIY?

Absolutely. (And I mean that.) Not only was doing a project like this together a great way to sneak in some quality time, but we managed to test our relationship for rough spots and learned how to compensate for each other’s weaknesses. Getting the entire project done in a day wasn’t easy, but it forced us to work together and really communicate with each other about the children and their needs, as well as our own.

Even though building a closet wasn’t anything close to a life or death situation, having so many things go wrong and being able to handle it as a team instead of turning against each other gave me hope that if anything ever did go seriously wrong, we could handle it together.

More Like This
5 Signs Your Baby Is Too Cold
The Complicated Targaryen Family Tree From House of the Dragon Explained
Kim Kardashian Stars In Hilarious House Of The Dragon Parody, The Targashians
You Can Stay At A ‘Hocus Pocus’ House On Airbnb — And It’s In Salem!