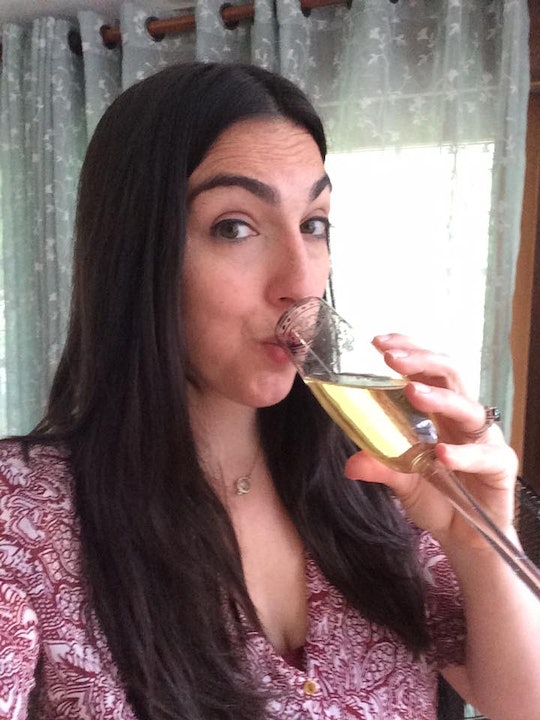 It was weird when it happened: the day I realized I'd gone a full week without taking a picture of my children. It was weirder still to realize I take more selfies than pictures of my kids... but it was also a far more profound moment than I'd have imagined. In a good way, mind you — a mom milestone you don't find in any of the baby books. But let me backtrack, because this deserves the whole story.

So, back when my oldest (now 7) was an infant, I started this tradition with myself where, every Monday, I'd go through the dozens of pictures I'd taken of him throughout the week. I'd delete the bad ones and duplicates (there are always duplicates — do you know how many times you have to call a child's name before they look at you and smile?) and save the best ones into a separate album just in case I ever lost my phone. But mostly I just did it to coo and smile. Because sometimes the parent of a young child just needs space to coo and smile. This little ritual would give me a period of reflection, on my baby, my motherhood, my week. Of course when I had a second baby she was included in the weekly round up and it became twice as fun.

So years of Mondays passed and I enjoyed my little ritual. Every day of their life, more or less, had some documentation to go along with it. This was the day we went to the playground. This is the day they spilled an entire jug of juice on the floor. This is when we went pumpkin picking.

Of course, such a thing — having multiple pictures from every. single. day. of your baby's life — would have been unheard of even 15 years ago. It certainly would have seemed impossible back in the Dark Ages of the 1980s, when I was an infant. I'm pretty sure there are pictures of me from when I was a few months old and then you turn the page in the photo album and I'm four. Meanwhile you could probably make a flip-book of my children's first three years.

Hey, no complaints. I like that I have a powerful computer in my back pocket on which I can store innumerable photos of my kids. And, seriously, bah humbug to anyone who complains about "people taking too many pictures of babies" like that's a real problem. Besides, humans like to document things; we've been doing it for thousands and thousands of years. Now we have the technology to capture the things we want to document, not just in our writing systems, but in images. And despite what you may think, historically speaking, most of what we document isn't Big Important Political Matters or even Significant Religious Or Philosophical Doctrine. It's the humdrum of every day life. The animals we hunted, how many jars of oil are in our cellars, and the people who live in our house. The history of documentation is extremely mundane. They're the little things, but it's the little things that matter... especially the little human things that run around our homes and leave Legos effing everywhere.

Because while our family life may be small on a global scale, it's big to us, largely because, when you're the parent of a young child or children, that's, like, your entire life. Even with all the appropriate self-care and regular time to your self or whatever, parenting is still a 24/7 preoccupation, even if you are able to take the occasional break from the care and feeding of your mini-humans. Once you're a parent there's no complete break from that, even when you're apart — a piece of your heart and mind are always going to be focused on them. Though, let's be honest: a lot of our time is spent with them, or directly focused on them. They require so much from us.

So, yeah, we take a gazillion pictures of our kids. It's in our nature, for reasons I don't completely understand, to keep track of what we do on this weird planet. Also, they're adorable AF.

Me out with some friends. Me in several different shades of lipstick to decide which one looked the best. Me with my kids. Or just... me. For no reason other than the fact that I was feeling myself in that particular moment.

At first I was sort of embarrassed because, "OMG, who takes this many selfies and not pictures of her kids?"

But then I thought "A woman who, after years of raising two children finally has some time to her damn self and is enjoying it."

We record our lives. The things that are important to us. And I was happy to see that, after the most immersive part of parenting — a place in time where it's so easy to lose yourself completely and for a long time after it's over — I came out in one piece, with an identity of my own. It's not that my children weren't/aren't important to me, or that they aren't a huge part of my identity (or that I don't still take a gazillion pictures of them), but I was really happy to see evidence of the fact that I was a complete individual without them. I knew who I was outside of my relationship with them. I was entering a stage in my life where it was possible to do something that wasn't centered entirely around my children.

Some people say selfies are vain and indulgent. But we take photos of the everyday things that are important — I'm important, and there's nothing vain or indulgent in recognizing that.