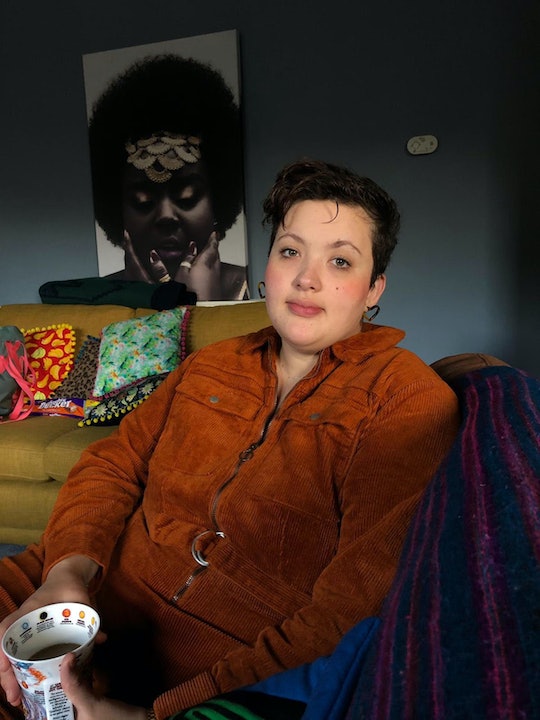 I Tried Hypnotherapy During Pregnancy For Depression & Anxiety

When I was expecting my eldest daughter, who is somehow going to be 3 years old this winter, my partner and I had a lot of conversations about our fears. There were plenty of them, like the fear of not being able to afford children or the vague but no less debilitating fear of "just not being ready." Nothing was as scary as the fear of how our respective mental health struggles might affect our soon-to-be-real kid, though. I chose to treat my anxiety and depression while pregnant in the hopes that I'd be better equipped to handle motherhood — and that, maybe, I would break the cycle of inherited anxiety and depression that seemed so inherent to my own family of origin.

Personally, I was reluctant to go on medication again, having mostly experienced the negative side-effects of various SSRIs in the past (as the Mayo Clinic notes, monotherapy during pregnancy is a viable course of treatment, if not for me). Therapy seemed like the better option, but committing to starting that up again wasn't easy. As most people with a history of therapy can probably attest, finding the right person to talk to can be a long and arduous process of trial and error. Finding someone who can help you unpack your sh*t in a way that is productive and empowering is really damn hard, and sometimes, you'll encounter a lot of people who kind of make things worse before finding someone who kind of makes things better. Also, finding someone that you like and you can afford isn't always possible. But professionals say it is important to address that sh*t during pregnancy.

"Untreated depression in an expectant mom during pregnancy can lead to a higher likelihood of developing postpartum depression after the baby arrives," Kirsten Brunner, a perinatal mental health specialist, private practice counselor, and mother to two boys, tells me. "This is why I encourage women to address any mood instability or anxiety they are experiencing during the pregnancy. By reaching out for help, they will be gathering resources, establishing good mental health, and preparing themselves for the journey ahead."

I ended up in hypnotherapy, which, prior to trying it, seemed equal parts hippy-dippy-nonsense and theatrical garbage. My only understanding of hypnotism came from stage-hypnotism I witnessed in high school; that is, from people being made to cluck like chickens in their seats, then kissing their frenemies, as a ring-master waved a pendulum in front of their sleepy-looking faces. Clinical hypnosis is nothing of the sort.

I found a hypnotherapist I genuinely liked pretty quickly. After a few thorough conversations about my history, the feelings and thought patterns I wanted to work on, and my overall parenting goals, we got started.

The main thing I wanted to work toward was combatting my physical manifestations of depression and anxiety — anxiety especially. For example, when I am extremely anxious, I have a tendency to speak quickly, to clean aggressively, to lose my temper faster, to scream or to cry while feeling painfully out of control, or to stop talking altogether, internally hermitting myself even when I remain physically present. I knew these were behaviors that might affect my children. Even if they didn't "inherit" my specific mental health troubles, they could still suffer as a result of my behavioral patterns.

Nearly three years into parenthood, it's certainly not a process that feels over for me.

There are plenty of studies that point to the likelihood of inheriting mental health and mood disorders from one's parents, depression and anxiety included. In 2018, a British research team isolated a gene that, as Healthline reported, "appears to be prevalent in multiple family members with depression." The publication continued to note that "people with parents or siblings who have depression are up to three times more likely to have the condition."

In 2015, a widely cited study by Dr. Ned Kalin, a psychiatrist at the University of Wisconsin–Madison, and published in the journal Proceedings of the National Academy of Science (PNAS), similarly showed that anxiety can be passed down to our young. Dr. Kalin and his team studied rhesus monkeys, ultimately isolating three regions of the brain associated with anxiety, and tracing behaviors from one generation to the next. "They found that 35 percent of the variation in anxiety could be explained by the genes passed down by mom and dad," reported LiveScience at the time.

Additionally, failure to treat anxiety and depression before or during pregnancy might make you more susceptible to postpartum mental health struggles — something I most definitely wanted to try to combat.

To my inner cynic's total surprise, hypnotherapy and the accompanying focus on mindfulness actually ended up being something I greatly benefited from — so much so that it was something I revisited when a second baby came into the picture, too.

As my therapist explained to me, it isn't a one-session-fixes-all kind of deal, despite how it may sometimes be portrayed in pop culture. Like all forms of talking therapy and cognitive behavioral therapy, it's a process that varies for everyone. Nearly three years into parenthood, it's certainly not a process that feels over for me.

I do feel a lot calmer, though. Like, a lot. A misconception about hypno seems to be that, during a session, you completely lose sight of the world around you, thus making yourself vulnerable to the suggestions of someone who is, essentially, a total stranger. Actually, that's not really how it works.

I never once lost consciousness. I was always totally aware of where I was and what I was doing. Being "hypnotized" was more about closing my eyes and trying not to think about anything. It has been about actively striving to turn off unproductive, harmful thoughts by entering a temporary state of total relaxation. Or at least, a state of relaxation more significant than is usual in day-to-day life. Upon getting to that point, your therapist will begin making positive suggestions based on the goals you set into motion.

I didn't always walk out of a session remembering everything my therapist said, but I did always walk out feeling good. Feeling capable. Feeling like I was establishing better coping mechanisms. Feeling like, through simple breathing techniques and quick check-ins with myself in moments of catastrophizing, I could re-frame my mood and behavior. At least more than I've ever been able to do in the past.

I won't say that starting the process of treating my anxiety and depression while pregnant has been foolproof. Having children has brought new stressors into my life. New things to get sad about. New things to fear. New things to obsess over.

When it comes to fear regarding how my mental health will affect my kids, however, I do feel better about it. I genuinely believe a little self-awareness can go a long way, and I hope that as long as my kids grow up seeing their parents trying to better themselves, they'll understand that personal growth is always possible; that even if something is making them sad or worried, those feelings don't have to take over everything. They'll hopefully believe that we are trying — and that, very often, trying is one of the most significant things a person can do.