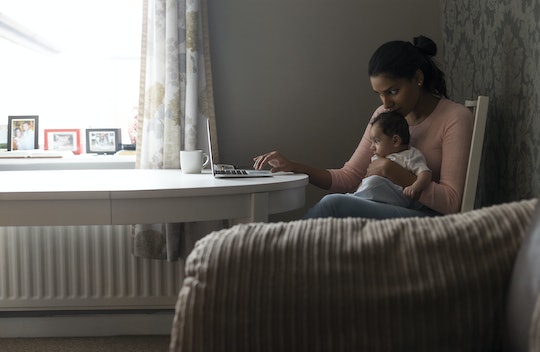 I Unfollowed A Friend After She Shamed Another Formula-Feeding Mom

As a new mom I must admit that I was ill-prepared for the constant debates, arguments, and judgments that seem to encompass parenthood. From how you give birth to how you feed your baby, every decision you make is scrutinized. I wanted none of that, though, and now that I'm a mom of two I still don't. What another parent decides is best for their child is none of my business, which is why I had no problem unfollowing a friend after she shamed another formula-feeding mom for feeding her baby as she saw fit.

I fed both my daughter and my son formula, but for two entirely different reasons. I tried my hardest to breastfeed my oldest — my daughter — after she was born. I had a supportive partner, a knowledgable hospital staff, visits with multiple lactation consultants, and a slew of involved friends and family members who were more than willing to help me meet my nursing goals. I tried pumping, tried every breastfeeding hold imaginable, tried setting a schedule and tried nursing on demand. But in the end one thing got in the way and derailed my breastfeeding plans: postpartum depression. Formula gave me the space to focus on my mental health while my baby grew and thrived. Without it... well, I don't want to think about what state I would've been in without the option to formula-feed my baby.

As a result of my initial breastfeeding experience, I didn't even try to feed my son anything other than formula when he was born five years later. Sure, I nursed once or twice, but I knew what was best for my mental health and I knew that formula was a safe alternative that would help my baby grow. I did what was best for my family and made zero apologies.

While I knew formula-feeding was the best decision I could make, I faced my fair share of judgment and shame. From people I knew to perfect strangers, everyone seemed to have an opinion as to how I should feed my child and why using formula was "wrong." As a result of the treatment I received, and the vitriol I've seen other moms endure, I've grown hyper-sensitive of any kind of mom-shaming, but especially shaming that involves formula. I know how it feels to be ridiculed for your choices. I know how isolating it can be when someone who has no idea what you're going through passes judgment.

I can't always curate my "real life," but I sure as you-know-what can decide who I come across on social media.

Not long after giving birth to my son, someone I considered a friend shamed another mom for using formula. She posted one of those viral videos to show how "pathetic" the mom was for putting the baby "in danger" by choosing formula. At first, it caught me off guard, as if this kind of judgment was directed at me. And, in a way, it was. But shaming other people wasn't really that characteristic of my friend, so I decided to let it slide. Perhaps I was being too sensitive. Perhaps I was reading too much into her social media posts. Perhaps she just had a bad day and was expressing her frustration in the wrong way.

I decided to reach out to my friend and ask her what was going on. Did something happen in her personal life? Was someone attacking her? Did she need to talk to a trusted friend? But instead of unveiling some reason behind her actions, she doubled down on her initial post. She was shaming a mom for formula-feeding because she thought it was "wrong." She thought it was "dangerous." She thought all moms that formula-feed are "lazy." She was attacking that mom on purpose. And she was attacking me without knowing it.

I unfollowed my friend on every single social media account I had almost immediately. I didn't see the point in continuing to subject myself to that kind of blind judgment. Motherhood is hard enough without the hateful opinions of outsiders who have no idea what you're going through or what kind of unique needs your children have. I didn't want to argue, or even let her know how she made me feel. I knew she wouldn't budge on her opinion, and I didn't feel like I owed her a justification as to why I or any other mom uses formula. I just wanted to cut her out of my digital life and move as far away from her shameful rhetoric as possible. I can't always curate my "real life," but I sure as you-know-what can decide who I come across on social media.

I knew I would never want to come across her again.

It's not always easy to cut someone out of your life, whether it be via social media or otherwise. But as a mom I have learned that taking care of myself has to be a priority. If I subject myself to the kind of toxicity and hate that accompanies mom-shaming, I suffer. And not only do I suffer, but my children suffer. If I spend time justifying my choices to every hateful person who decides they have the right to dictate what other people do, I'd be too exhausted to tend to myself or my children. So if you see another mom blindly judging parents for their decisions, take a page out of my social media book and don't be afraid to hit block. Immediately.

More Like This
What Is RSV?
Zaya Wade Is Rocking New Long Hair & As Gabrielle Union Put It, She's A "Vision"
Experts Explain Whether It’s Safe For Your Baby To Sleep On Your Chest
Introducing My Boyfriend To My Kid