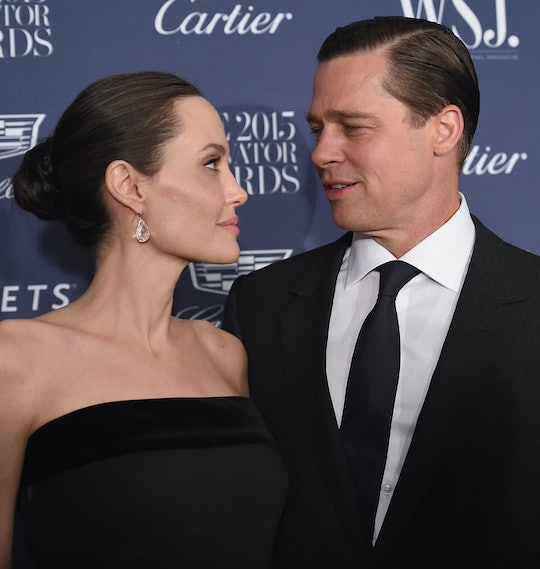 As news broke of Angelina Jolie and Brad Pitt's impending divorce, I drowned myself in the media circus and unending rumors like, well, everyone else. I read through every potential reason why their two-year marriage and 10-year partnership ended so abruptly, leaning into accusations of infidelity and assuming maybe that had caused their split. (That allegation has not been substantiated, as Jolie's statement read that the "dissolution of the marriage" was for the "health of the family.") Though Jolie and Pitt have not offered a reason for their divorce beyond citing "irreconcilable differences" in the court filing, it's the latest allegation against Pitt that has me completely unnerved. I was abused by my father and, if the allegations are true that Brad Pitt is being investigated for possible child abuse by the Los Angeles Police Department, then Angelina Jolie is doing what I wish my mom could have done so many years ago.

According to TMZ, Pitt is under investigation by the Los Angeles Police Department (LAPD) and the Los Angeles County Dept. of Children and Family Services for allegedly verbally and physically abusing his children. In the report published Thursday morning on TMZ, a source familiar with the situation claims that Jolie, Pitt, and their six children were on a flight when the alleged verbal and physical abuse took place. The source alleges Pitt "got wasted" on the jet and "went wild, screaming and getting physical with the kids." The TMZ report concludes that an anonymous source reported the incident to the L.A. County Dept. of Children and Family Services. However, just hours after the TMZ report was published, the Independent reported that the LAPD denied an investigation into any allegations of abuse against Pitt. A spokesperson for the LAPD told the Independent:

We only found out through calls this morning, we contacted divisions that would be handling it and they’ve said no.

To date, no official charges have been brought against Pitt. Romper reached out to Pitt's rep regarding the allegations but did not immediately hear back.

And in the haze of all the reports, it's no longer Jolie and Pitt's stories I'm invested in — it's the reality of how many children live with violent parents and what that does to them. I know because it happened to me.

My mother spent more than 20 years in an emotionally, verbally, and physically abusive relationship. As a result, so did her children. My childhood wasn't the childhood so many of my peers experienced around me. While my best friends dreamed about their wedding day, the moment their fathers would walk them down the aisle, and the father/daughter dances they'd lovingly experience, I dreamed of leaving my home the moment I graduated high school and of never, ever seeing my father again. While my best girl friends went on and on about how kind and loving and caring their dads were — and how they were planning on finding someone just like them when they grew up and fell in love — I was afraid of relationships, commitment, and encountering any man who was as violent, manipulative, and self-centered as my father.

I spent so many of my mornings, afternoons, and evenings begging my mother to leave. I'd plead with her and cry and scream, growing all the more angry with her because no matter what happened or what he did, she stayed. After every black eye, every broken bone, every bite mark, and every hole in the wall, she'd stay and I couldn't, for the life of me, understand why. "Why can't you just leave?" and, "Why don't you care about us enough to leave?" and, "You're failing as a mother because you won't leave," were all questions and irate accusations I'd yell and throw her way, frustrated and scared and hurting and angry that the childhood my peers so freely enjoyed was one I'd never know. I was tired of being afraid of my father. I was tired of being hit and choked and pushed and told I was "worthless." Mostly, I was tired of seeing my mother so powerless to stop any of it, powerless to gain control over her life, and powerless when it came to protecting her children. I wanted and expected her to save my brother and and me from his abuse. I wanted her to just get up, pack our things, and go.

Under the shroud of youthful naivety, my mother's situation seemed so cut and dry. If someone is hurting you or your children, you leave. You pack up your things and you tell them you'll never see them again and, just like the movies, you move out and onward and towards a happy ending. (And make no mistake, you immediately get that happy ending on the first try.) That's not how the real world works, though. My mom couldn't leave my emotionally, physically, and verbally abusive dad, and it wasn't until I was an adult that I realized she was doing what so many women are forced to do because they're living an impossible situation with no support, no options, and no way out.

Angelina Jolie has the ability to do what I begged and pleaded and yelled and screamed and wished my mother could: She can, for all intents and purposes, get up and leave.

An estimated one out of every three women will be in an abusive relationship during their lifetime, according to DomesticAbuseShelther.org. The site also notes that, on average, a woman will leave an abusive relationship seven times before she actually leaves for good. As a result, an estimated five million children witness domestic violence each year, in the United States alone, according to the Childhood Domestic Violence Association, and 40 million adult Americans grew up living with domestic violence. Why? Because it's not easy to leave. I didn't know at the time, but my mother was financially dependent on my father. He had control over the finances, which made it virtually impossible for my mom to financially support herself or her children on her own. Most domestic violence victims cite income and financial instability as reasons why they couldn't leave their abusive environments, according to the Allstate Foundation Purple Purse. My mother didn't have any money. She had no conceivable way out. And after looking over Jolie's estimated net worth (an astounding $200 million), income and financial instability do not appear to be issues Jolie has to contend with in divorcing her partner. Instead, Angelina Jolie has the ability to do what I begged and pleaded and yelled and screamed and wished my mother could: She can, for all intents and purposes, get up and leave.

Money wasn't the only reason my mother couldn't leave my father, though. In talking with my mom now, I've learned that my father had emotionally manipulated and abused my mom to the point that he convinced her that, if she left, she'd be the one causing my brother and me harm. "Think of the children," and, "You're breaking up their family," and, "They'll never be happy during the holidays," were all lies my father implanted in the most empathetic, caring parts of my mother's brain. Over time they took a toll, and my father had successfully convinced my mother that if she were to leave, she'd be ruining our lives in the process. I can't speak to Jolie and Pitt's emotional relationship, much less assume their situation was in any way similar to my own, but if the allegations are true, I can't help but applaud Jolie for looking past the lies so many abusive partners tell their victims and doing what she felt was best for the sake and "health" of her children.

More than anything, I want to apologize to my own mom. I also want to thank her. Thank you for doing what I can't even imagine doing. Thank you for finding the strength to do what you had to do not just for your children, but for yourself.

But the most significant reason why my mother couldn't leave was because she was alone. My father had alienated her from everyone she knew. She couldn't talk to friends, she couldn't talk to family, and she couldn't reach out to our church pastor or our coaches or our teachers. She was stuck, because my father kept her in our house, tending to her children, making dinner, living for his pleasure. Unlike my mother, Jolie has the means to travel, and does so frequently for either work or humanitarian efforts. Unlike my mother, she's not stuck at home, alienated from those she loves and cares for and those who love and care for her. Unlike my mother and thousands of other women cut off by their abusers, Angelina Jolie has significant portions of her life that have nothing to do with her spouse, with all of the relationships and accomplishments they entail.

So, while I owe a relative stranger an apology for assuming she left her husband because he cheated on her with another high-profile actress, I owe my mother an even bigger, more meaningful, "I'm sorry." Even in the midst of of child abuse allegations and even though her divorce is very high-profile and sure to be the subject of headlines for days if not years to come, Angelina Jolie's action in the days since filing for divorce from Brad Pitt remind me of how difficult it was for my mother to do much (if any) of the same. It reminds me of how difficult it is for the majority of women, especially women with children, who are emotionally, verbally, and/or physically abused. If charges of child abuse are brought against Pitt, then yes, we should absolutely commend Jolie for doing what she needed to do for the safety of herself and her children. But in doing so, we should also recognize the thousands upon thousands of women around the country who cannot simply pack up and leave and serve their abusers divorce papers. Those women need our support, too.