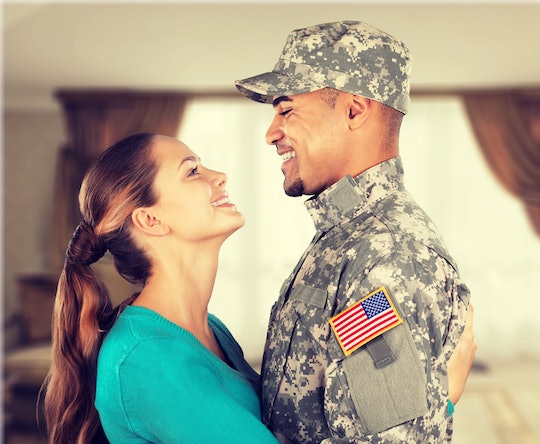 Here's What People Get Wrong About Military Moms

As a descriptor, the term "military mom" can mean a lot of things. If you have a son or daughter in the service, you might refer to yourself as one. Active duty mothers are a very special kind of military mom, too. The role I'm referring to, however, is the one you're most likely thinking of: a military spouse raising children with a partner who is currently serving. It's a position the public thinks they understand, but I'm a military mom, and I know that there's quite a lot you get wrong about me.

When I met my husband he was stationed at the local Army base. We were married one year and four months later, but beyond getting my ID card, so-called "military life" didn't affect me much. I kept my same job, had my own benefits, and lived in the house I'd bought. Soon after our daughter was born, though, we faced our first permanent change of station in another state. I left my teaching position, family, and friends to be a stay-at-home mom. We moved across country yet again eight months later, and shortly after, my husband deployed to Afghanistan for a year. Now, being a military spouse and mother is a significant part of who I am.

It wasn't until I became a military wife, however, that I was exposed to some of the unfavorable stereotypes. Perhaps the ugliest is that of the "Dependapotamus." It's as bad as it sounds — she's fat, lazy, entitled, neglectful of her children, and spends her hard-working husband's money on Coach handbags. It's a gross and insulting depiction, and unfortunately, it's one that's promoted by "good" military spouses. The fact is, stereotypes, whether positive or negative, are rarely helpful and often harmful.

I'm not a gold-digging cheater, nor am I a Stepford wife. If you think you know what it is to be a military mom, you might want to think again. I make a habit of defying generalizations, and these in particular: