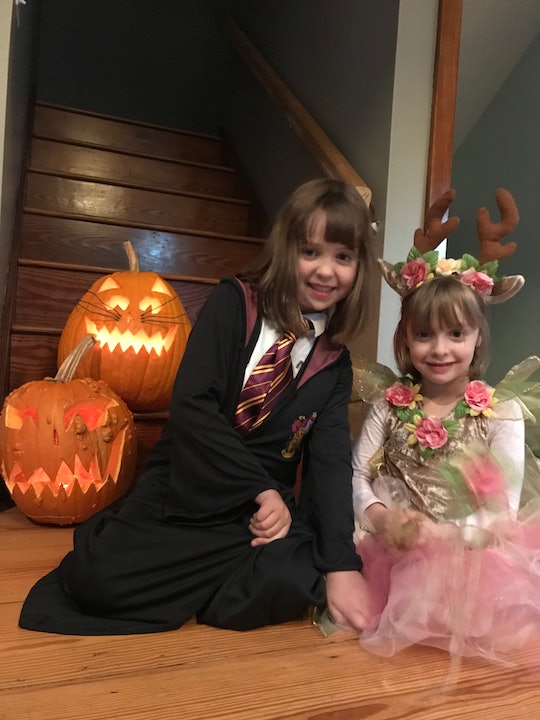 I am dreading Halloween this year, because last year it totally sucked and the year before that totally sucked too. I’d always loved the costumes and all things spooky and creepy and dark, but since becoming the parent of a child with a physical disability, Halloween has become a day I wish we could skip altogether. It’s the trick-or-treating that I hate, and not because of the costumes or the candy or even the greediness of grabbing as much junk as possible as quickly as possible. The really awful part is how trick-or-treating – at least the way it’s done where we live – is a frenzied activity suitable for able-bodied people only. It’s like Black Friday for kids; a true accessibility nightmare. And my kids – both of them — wanted in.

When my kids were very little, we avoided trick-or-treating. We dressed up at home, put up spooky lights, carved pumpkins, and watched The Nightmare Before Christmas. That got us through the preschool years. I knew trick-or-treating would be unavoidable eventually, but I forgot about it until the day snuck up on me and I discovered that my now elementary-school-age children just assumed they’d get to go door-to-door like everyone else they knew. I was completely unprepared. I'd asked no one I knew with children with disabilities how they’d handled trick-or-treating. I just assumed I’d be able to figure it out as we went. That was the first thing I did wrong.

Sure, I had marveled at online photos of other people's children in costume. Some were children with disabilities. There were even wheelchair costumes: elaborate constructions of trains or castles that I would never in a million years be able to make. My favorite costume of all was a girl in a power wheelchair wearing an uncomplicated but impressive jellyfish costume (white outfit, clear plastic umbrella, white streamers, blue Christmas lights). I did lots of thinking about Halloween. But I didn't think enough about Freyja, who uses a walker when she is feeling energetic and a wheelchair when she’s not. Her rare neurological disorder keeps her from walking independently.

The day arrived and I was as ready as I would ever be. My girls came home from school all excited to get going. I got them into their costumes, put on their makeup as fast as I could, dumped 120 mock-healthy, fruit-sweetened lollipops into a rayon pumpkin and set it on the front step on the doorstep, and scribbled a note that I taped to it: We're out trick or treating too! Please take a few, and happy Halloween! Then I decided that it would be best for everyone if I left the wheelchair and the walker at home and we just carried Freyja so she wouldn’t get too tired to participate. As an afterthought, I dug out our old Ergo, the baby carrier I’d used when the girls were smaller. Then we piled into the car to meet up with friends to trick-or-treat.

Ten minutes after we arrived, Freyja looked at me in alarm. "Where's my walker?" she demanded. "I want my walker!" I tried to explain to her that we didn't need it, that her daddy or I would carry her, that she would get tired trying to run from house to house with the other kids and on top of that, she wouldn't be able to carry her bag of candy. She blinked. "You can’t carry me for that long. I want my walker!" she repeated. She was right. I don’t know what I was thinking. Neither my husband nor I would be able to carry her for that long, for that far, in the dark.

Our friends tried to be helpful. One offered Freyja a stroller. "I want my walker," she repeated. She set her jaw. I knew there was no negotiating but our friend tried anyway. A wagon? A red plastic car with a handle? A blue electric car? Freyja just stared at her. She spoke slowly and loudly: "I said, I want my walker!" So I drove back to our house and got the walker. Freyja's face lit up when I came through the door. "You got my walker!" she exclaimed. And out we went.

It was twilight. The houses were lit up and the decorations were wild and spooky. The kids were all bouncing up and down with anticipation. I felt the first wave of genuine excitement. Our friend called to the pack of preschoolers and first graders in our group. Ready, everyone? We're going to hit that yellow house first. That one over there with the bats hanging from the porch. Ready? Ring the bell when you get there. Set? Don’t forget to say thank you! Go!

They were off. Within seconds, Freyja was left in the dust. She walked as fast as she could but she just couldn’t keep up. "Hurry, hurry!" I urged her desperately, already caught up in the drama. "Thora is already up there! Everyone else is at the door!" Two houses in and she was sweating and panting and giving up. "I don't want my walker," she announced. She held out her arms. "I want you to carry me.”

Hidden under a coat, in a baby carrier, behind her mother, her little body was barely visible, her tiny voice barely audible.

The second thing I did wrong was not double-check to make sure she fit in the old Ergo. Baby-wearing in general is not for everyone, but I loved it… when my kids were babies. Wearing a 5-year-old is an entirely different thing. Freyja’s legs are so high tone that they don’t open more than a few inches, so I had to wear her with her legs closed, in a strange sidesaddle. She was strapped to me with her right hip digging into me, her right arm was thrown around my neck, and her legs were squeezed together, dangling awkwardly at my right side. After just a few minutes, this position began to hurt us both so I tried to support her with one arm under her knees and the other around her waist. Her head was level with mine. We were temple to temple. It was the longest, most awkward and uncomfortable hug. I could tell she hated it.

For the next 26 houses, I carried all 37 pounds of her bossy little self, stopping only to unload her on my husband between houses to catch my breath. She was buckled in tightly, strapped to my chest, urging me on like a little parrot using my exact words from earlier. "Hurry, hurry! Thora is already up there! Everyone is at the door!" she repeated over and over. She banged a fist on my shoulder. I could barely see over her head; every time she turned to look at something, I’d get a mouthful of hair. Unable to look down, I tripped repeatedly over the littlest children as I went up and down people's front steps in the dark, trying to feel my way and avoid getting Freyja’s legs, sticking out rigidly from her knee-high braces, caught in railings and fences. No one saw Freyja until I made it all the way to their doorstep. Hidden under a coat, in a baby carrier, behind her mother, her little body was barely visible, her tiny voice barely audible. I stood awkwardly, inches from neighbors we did not know, feeling strangely obligated to apologize, finding myself instead prompting Freyja loudly to say please and thank you and to tell people what she was dressed as to fill the silence, trying desperately to communicate why this five-year-old needed her mother to carry her. Luckily, nearly everyone got it. They tried to be kind. They tried to be helpful. They proudly pointed to their teal pumpkins to show me how progressive they were. They complimented the costume they could not see. They made small talk. One or two offered me a glass of wine. Mostly they pushed chocolate on me. "Go on, take another one," they pressed me as Freyja reached for a piece. "You look like you could use it, too."

Well you sure got your steps in today! one well-intentioned mom joked, patting me on the shoulder. I wanted to kill her.

For two-and-a-half frustrating hours, I sagged under the weight of our child. My husband tried to help. "No. I want Mama," Freyja repeated. Our kind friends tried to rescue me. Want me to carry her for a bit? Here, let me take that bag from you. Can I get you a drink? No thanks, I said again and again. I bit my lip. Well you sure got your steps in today! one well-intentioned mom joked, patting me on the shoulder. I wanted to kill her.

When we got home, we saw that someone had overturned our rayon pumpkin and crumpled up the note I'd left out. All 120 lame, pediatrician-approved lollipops were gone.

What a terrible Halloween. The worst, I thought. And it was, until the next year.

The second time we tried trick-or-treating, it was much easier for me. No longer able to carry a 6-year-old, I had no choice but to force Freyja to use her wheelchair. She remembered the previous year too, so she did not protest. But it was twice as hard for Thora.

This time we went out just the three of us. My husband stayed home to give out candy, and we declined invites to join friends so that we could go at our own pace, and once again, I figured we'd be fine. What I didn’t think about was that, unsurprisingly, not a single driveway, porch, walkway or front door was any more accessible than it had been the year before. I just assumed that this time, neighbors would be able to see Freyja from a distance and understand that they needed to come to her. Sadly, not one of the generally delightful, friendly, kid-loving people who answered their doors came down to ground level because it was dark and they couldn’t see her. Instead, my older daughter had to do all the hard work. Somewhat apprehensive around strangers even at the best of times, she did not want to trick or treat alone, but I could not leave Freyja on the sidewalks or in the driveways to accompany her. At each house, Thora walked up the steps or onto the porch to ring the doorbell alone, carrying both candy bags. I watched her point to the two of us standing in the shadows just beyond the porchlight, explaining that she’d like to take another piece for her sister who can’t get any closer because she has a disability. Yes, that’s her over there in her wheelchair. What? You can’t see her costume? Oh right. Well, she’s a fairy. Oh me? I’m Hermione.

I know we are all learning about accessibility as we go. This is nobody's fault, but shouldn't it be everyone's responsibility to change? As I get more experience as the mother of a child with a disability, I see very clearly how ableist our culture is. We can all do better.

This year, I want a Halloween do-over. Unfortunately, I don’t see any way around the trick-or-treating, but this time, I think we’ll all go as jellyfish.