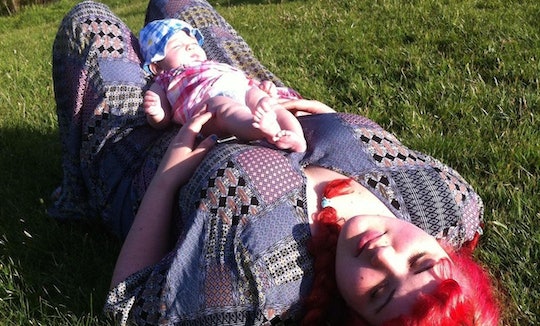 I Didn't Take My Prenatal Vitamins

Early in the fall of 2016, I woke up to discover that my areolas were significantly darker. "I wonder if I'm pregnant," I joked to my partner, knowing that such discoloration often occurred when women were expecting.

I said this in jest because I'd spent the better part of 10 years hearing from doctors that I was infertile because I had Polycystic Ovarian Syndrome (PCOS). The OB-GYN who initially diagnosed me told me that while in vitro fertilization might help, the chances of my bearing children would still be slim. The fact that I was plus-size, they said, didn't help.

Still, I wanted to make sure I wasn't pregnant, so I took a home pregnancy test. As it turned out, that home pregnancy test came back positive and I found myself in the sonogram room of a Manhattan-based women's clinic a couple of days later. "You're nearly 21 weeks in," the technician told me.

I was shocked. I'd had absolutely no idea. Because of my PCOS, I never got my period, and I'd experienced no weight gain or morning sickness. But most of all, after my partner and I decided we wanted to continue the pregnancy, I was worried, because suffice to say, I didn't exactly have any prenatal care in those first five months of pregnancy. I drank plenty of Barefoot Moscato, lit up more than a few spliffs, attended a three-day summer festival jam-packed with all sorts of shenanigans, skipped plenty of meals while trying to meet deadlines, and I certainly didn't take any prenatal vitamins. We were terrified that the latter would affect our baby's development.

Because we found out about our pregnancy as late as we did, the next two weeks consisted of getting genetic counseling and enough blood work to satiate a small family of vampires. The counselor asked about my lifestyle throughout those five months when I didn't know I was pregnant, and I gave her an honest answer: I occasionally drank wine and smoked marijuana, and I didn't take any prenatals. She reassured me that the booze and Mary Jane I'd ingested shouldn't pose any major risks, particularly if I stopped now (which I did). She did, however, warn us that our baby might be at a slightly increased risk of having a low birth weight.

I was absolutely paralyzed with fear of hurting our unborn kid.

From the onset of my discovery that I was pregnant, however, it was the lack of vitamins I was most concerned with. I knew prenatal vitamins were considered a "must" during pregnancy, largely because getting all the nutrients both you and a baby need is a difficult task, no matter how well-balanced your diet may be. I also knew that these little pills contained folic acid, which is said to help prevent defects of the baby's neural tube, and eventually the spinal cord and brain.

In the four months of pregnancy that I was actually aware of, I encountered a lot of stigma. "How could you not know?" people asked, sometimes with flat-out contempt. "What if your baby has developmental delays? What if you hurt her?"

The truth is, I was absolutely paralyzed with fear of hurting our unborn kid. After all, even though I hadn't known I was pregnant at the time, I hadn't taken care of her. I had put her at risk. I had done things a pregnant woman shouldn't do. I had already failed at being a mom — a thing that, deep down, I had always wanted, but that I had been forced to convince myself wasn't for me after a decade of being told I was infertile. I hadn't even taken my vitamins, dammit.

Even though every blood test came back normal, I felt panicked and uneasy.

Had my baby gotten enough calcium, I wondered — the thing that promotes the growth of muscle and blood cells? Had she received even the smallest amount of vitamin D, given my propensity to stay indoors? Would she be anemic as a result of my poor meat and dairy intake? What the hell does vitamin A even do? Was I eating it enough? How could I know? These were all questions that ran through my mind for the remaining four months of pregnancy.

Luckily, my pregnancy progressed without a hitch. But even though every blood test came back normal, I felt panicked and uneasy. I set daily reminders on my phone to ensure that I took my vitamins from then on. I tried to eat as much peanut butter and beef as I could stomach in an effort to make up for any potential iron deficiencies. And I made a commitment to leaving the office I was working at at least once a day to get a little bit of sunlight.

Two weeks from my due date, my fears returned. Was this a product of the lack of vitamins?

In many ways, I felt downright lucky. My pregnancy had been so symptomless and complication-free that I hadn't even noticed it. In those first 20 weeks, there was no morning sickness, no major changes in my body, no aches or pains at all. In many other ways, however, I felt like I should be given some kind of Sh*tty Mom-To-Be badge.

Thankfully, everything remained more or less problem-free as I neared my due date. Everything except my baby's weight gain. As that initial counselor had suspected, our daughter was on the small side (the ninth percentile, to be exact). She wasn't growing quite as much as the doctors would've expected, and considering my size as well as my weight when I was born (nine pounds), they would've liked to have seen more rapid growth.

I may not have taken my prenatal vitamins religiously, and I may often wish I had been able to do so at the beginning of my pregnancy. But my baby is doing great.

Although nothing on the sonograms indicated that there was an issue, the main OB-GYN at the hospital I ended up delivering at couldn't shake the feeling that something might be wrong with my placenta, which would potentially prevent the baby from receiving the full extent of nutrients she should be getting. Two weeks from my due date, my fears returned. Was this a product of the lack of vitamins?

Because there could be an issue with my placenta, we were advised to induce. My baby might be able to get more nutrients from my breastmilk than she was getting from the womb, a midwife said, so why not, right?

About 52 hours later, our daughter Luna arrived. She weighed only five and a half pounds, but she was perfectly healthy. My placenta was, in fact, a little small, so it's definitely possible that she wasn't getting enough vitamins and nutrients from it. But as for long-term consequences of this, there haven't been any yet. She's five months old now and she's been meeting her milestones like clockwork.

Whether the size of my placenta came down to the lack of prenatal vitamins in those first 20 weeks of pregnancy, no one has been able to tell me for sure. For this reason, I'd never condone forgoing the prenatal vitamins and I'll certainly be more prepared if ever my partner and I decide to try for baby number two.

What I know now, however, is that I did the best I could. It wasn't my fault that I didn't know I was pregnant. Hell, up until finding out, I didn't think that'd ever be possible anyway. As a result, I was just going about my life as any 25-year-old around me would be doing.

Luckily, my baby is totally OK. She's been growing steadily since birth, and she's just the happiest little thing — finding joy in the faces of those who love her, in the crinkliest toys, in her flowery mobile, and, most recently, in the discovery of her feet. I may not have taken my prenatal vitamins religiously, and I may often wish I had been able to do so. But I'm so glad to say that she is doing great.