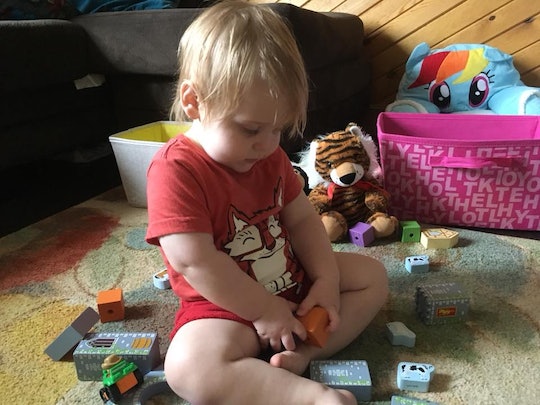 As I wandered through my house this morning looking for my lost cup of coffee, I couldn't help but notice how many toys were in my home. So, I stopped to pick up my toddler's blocks off the living room floor, which I do several times a day, then I took a pile of discarded stuffed animals and Rescue Bots up to my middle kids' rooms (and after stepping on a Lego). It was in that moment that I made a silent promise to myself: I'm done buying toys for my kids.

Now, I'm not a monster so I want my kids to have access to a plethora of toys they can play with. In fact, my children have way more toys than my parents could afford to provide me when I was a child. And you can bet it's delightful to see the looks on their faces when they open presents, and even better to watch them save their own money to buy something they've been eyeing at the store or online.

In other words, my kids are privileged to have so many toys and I'm privileged to be able to afford them. Our kids also have a village of people who love them so much that they shower them with presents, so the number of toys is a testament to just how many people love and care for my children. But I have to admit that I kind of wish their village would start expressing that love in ways that didn't involve toys.

I'm not saying that my kids don't play with their toys, because they do. Hell, they play with their toys pretty much every single day. But we're now at the point where there are so many toys in our home that my kids couldn't possibly play with them all, even if they had the time. I'm talking thousands (if not tens of thousands) of individual items, accumulated by five children over 12 years of childhood, and that's after annual purges and trips to the charity donation center.

It's a sea of broken toys, my friends, and that sea is threatening to drown me and my sanity.

And while my children definitely have their favorite toys that they seem to love on more than others, I can't seem to convince them to get rid of those often forgotten toys that rarely see any playing time. I've tried, don't get me wrong, but like an old shirt in the back of some closet we all swear we're going to wear but never actually touch, my kids don't want to say goodbye to the toys they barely play with. And since I consider myself to be a peaceful parent, I have an extremely difficult time throwing my kids stuff away unless they are fully on board or the items are broken. Mom guilt FTW, my friends.

When I ask my kids if they're willing to donate unused or rarely-used items to charity, or throw away things with broken or missing pieces, overlooked toys magically become the most cherished items. I’m not talking about loveys either, which I would at least be more sympathetic towards. For example, the other day my husband threw away a broken wooden rod that held spools of paper for their easel. The 8 year-old cried for an hour about that damn broken stick.

If you don't think this toy debacle is exhausting, I'm going to go ahead and guess that you're not a parent.

And then there's my 9 year-old daughter — the artist and engineer — who enjoys taking apart her toys or re-purposing them into elaborate designs of her own creation to serve an entirely new purpose. It's amazing, to be sure, and I want to foster her creativity in whatever way I can. But OMG she has a room-full of parts, pieces, supplies, and creations that are often discarded or forgotten when she moves onto her next project. It's a sea of broken toys, my friends, and that sea is threatening to drown me and my sanity.

My 5-year-old can't remember where he put his shoes, but he will ask about the old train set that donated years ago and then vow to save his money to buy another to replace it. When we last moved I gave away so many of his old baby and toddler toys, but six months later I got pregnant with my youngest and had to replace them all. The cycle of toys is never-ending, but I feel like every child should have the same amount of toys or at least be able to play with the same amount. If you don't think this toy debacle is exhausting, I'm going to go ahead and guess that you're not a parent.

I feel like Sisyphus pushing a giant boulder up a hill, only to have it roll back down again as soon as I reach the top. Only, in my case, the giant boulder is thousands of toys.

In an effort to consolidate and at least contain the toy madness, I've sorted toys by type, size, and even color. I've packed half of them away in plastic totes, planning to rotate them in on a seasonal basis, and I've had my older kids take responsibility for putting their toys away before bedtime. I've even started to teach my toddler to clean-up after himself at playtime, because "official toy cleaner-upper" is not on my resume.

But no matter how often my partner and I sort our kids' toys into some system, they always seem to end up in a giant toy box that's impossible to navigate at play time. Getting them to clean their rooms involves one of us parents getting involved to an absurd level, considering that our older children are ages 5 to 12 and they should be able to handle this task on their own. Most of the time we end up with the same toy box full of toys that somehow end up scattered all over their rooms less than a day later.

In the end I feel like I'm the only person in my family who truly cares about the number of toys in our home.

My toddler's toys are somewhat organized and corralled in two rooms, but he's reached a stage where he pretty much dumps out buckets or boxes as soon as I load them up and unless I immediately put them out of reach. I feel like Sisyphus pushing a giant boulder up a hill, only to have it roll back down again as soon as I reach the top. Only, in my case, the giant boulder is thousands of toys.

There are toys in every single room of our home, including the bedroom I share with my spouse. I am so tired of cleaning up other people's things, and looking at discarded toys all day long, but if I go on strike the problem gets worse. In the end I feel like I'm the only person in my family who truly cares about the number of toys in our home.

I used to love picking out toys for my kids, and I want the people in their lives to experience the joy that is giving a child a toy.

But perhaps the biggest issue I have with the number of toys in our home is the realization that my kids don't seem to value their toys. Toys are expensive — a concept my kids still don't grasp — and I don't want them to be materialistic or to value things over people. I don't want my kids to ask for toys every time someone visits or takes them to the store.

But even if I don’t buy them toys, my kids' relatives and friends do. No matter how many times I write “your presence is present enough” on birthday party invitations, or ask their grandparents to consider a zoo membership or other experience for Christmas, my kids are gifted more toys.

Part of me feels terrible that I have become so anti-toy. I used to love picking out toys for my kids, and I want the people in their lives to experience the joy that is giving a child a toy. But my tolerance seems to have diminished with each child, to the point that I'm hesitant to buy my youngest toys that are actually beneficial for his development.

I just don't derive any joy from seeing another toy come into my home. I'm not happy when toys are covering every inch of my living room floor. I'm not entertained when I'm the only one who cleans the toys up and puts them away. So I'm done buying toys for my children. Done.