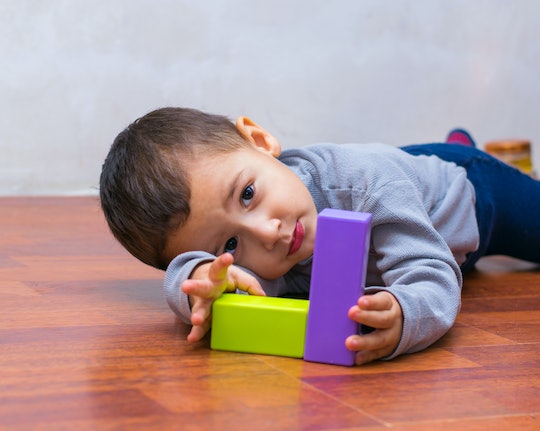 It's not often that you hear a parent say, "Gosh, I wish my kid had more toys." After all, moms and dads spend a lot of their days cleaning up messes and tripping over Legos, am I right? But if you've been wondering "Why doesn't my child play with toys?" when you seemingly have them coming out of your ears, then you may want to keep the age-old lesson of quality over quantity. That's because the issue may not be how many toys your child has, but whether or not they are the right ones, Dr. Christopher Willard, author of Raising Resilience: The Wisdom and Science of Happy Families and Thriving Children, tells Romper in an email interview.

"Kids need 'mastery' of their toys, not superficial relationships with as many possessions as possible," Willard says. "You probably noticed early on in your child’s life that kids want the same books and games over and over again. The repetition might drive us adults crazy, but it’s actually critical for a child’s cognitive development."

Willard points to studies that show when kids have too many toys — even more than five at once — they are less able to focus on learning from and mastering them. "You’ve also likely witnessed how creative and engaged kids become when they have to invent new toys and games out of virtually nothing," he says. "If necessity is the mother of invention, perhaps boredom is its father."

If your kids are disinterested in certain toys, then you may want to encourage them to get rid of them by appealing to their imagination and natural compassion, Willard says. "For example, ask which toys are lonely or which stuffed animals might be happier (and might bring happiness) in a new home," he says. "Imagining the story of that toy’s next journey can help make the thank you and goodbye that much easier."

You can also begin piquing your children's interest in certain play items by choosing ones that appeal to their specific interests, not just scooping up the latest toy on the market, Louise Sattler, a mother and Los Angeles-based school psychologist, tells Romper in an email interview. "I believe that children may find their interests by being exposed to a variety of settings and choices," she says.

For example, a child who loves the park may prefer gross motor toys and games. But you can change things up by adding in some fine motor toys, like sidewalk chalk. On the other hand, a child who loves a science museum may like all of the STEM toys now available, and Sattler says if you have a kid who is interested in art and crafts, then you can encourage their creativity by exposing them to music, dance, and the performing arts.

You can also feel confident that seemingly everyday toys, like dolls and trucks, help to build group dynamics and interpersonal skills. "Children often use them to help negotiate their own lives," Sattler says, adding that board games can help children grow by teaching them problem solving methods, cooperative learning, and other educational skills.

Helping your child to identify their toy interests has an added bonus, Elisabeth Stitt of Joyful Parenting Coaching tells Romper in an email interview — you can declutter your house a bit. "Let’s say that your child loves doing arts and crafts, and your shelves are filled with the remnants of half used kits," Stitt says. "Have your child identify which of the projects provided the most fun and satisfaction and offer to get refills for that project."

For example, if your kid loved the weaving kit they got for their birthday and completed all of the projects listed in the manual, then you may want to purchase new supplies to encourage them to make more. But if the flower making kit, for instance, only lasted an hour or so and hasn’t been touched since, then you may want to get rid of it. The bonus, Stitt says, is that the knowledge you support the former art endeavor — in this instance, the weaving supplies — might make it easier for your child to say goodbye to the unused flower making kit.

The key then, it would seem, to finding the best toys for your child would be to not only nail your kid's interests, but use a bit of your parental bargaining power. Which you don't mind exercising every now and then, right?