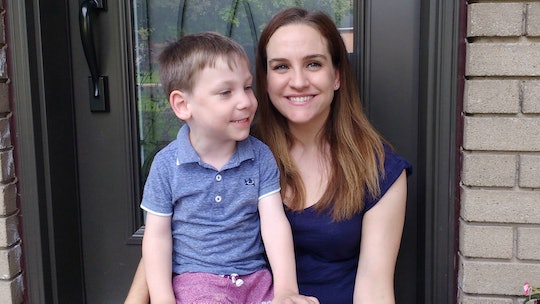 Four years ago, I gave birth to a set of twins: a boy and a girl. In some ways, twin motherhood is like performing a human science experiment with an extremely small control group: for instance, I used to think that parenting style almost entirely determined a child's temperament, but my twins disproved that basically the moment they were born, because they are polar opposites. But having twins didn't just challenge my assumptions about motherhood — it also made me think about issues like gender inequality in a completely new way.

I used to think it was important to raise my son to be a "nice guy," and I do still want both of my kids to become kind and well-adjusted people. But twin motherhood has forced me to acknowledge that, whether I like it or not, my daughter will inevitably experience the world much differently than her brother will, because institutional sexism is still very much alive and well. That means that I now hope for so much more for my son than just that he'll grow up to be a generally decent dude. Because these days, being a "decent dude" doesn't really mean squat.

To be clear, I don't actually have anything against nice guys. In fact, the man I married and am happily raising two children with is basically a quintessential millennial nice guy: a straight, white, cisgendered dude who treats me with respect and wakes up early with our kids at 5 a.m. each morning. He's the kind of nice guy who packs his children's school lunches with reasonably healthy, peanut-free snacks in environmentally-friendly bento box containers, before heading off to work at a job where he takes direction from women with more experience and authority than him without grumbling that they're being too "emotional."

I hope that my son will one day understand that he doesn't just need to be a good ally. He needs to actively choose feminism, so he can stop indirectly perpetuating misogyny.

He's also the kind of nice guy, however, who believes in equal rights for everyone, but was still reluctant to call himself a feminist for a long time. He's the kind of nice guy who would not ever feel OK calling out one of his similarly "nice" white male friends on their privilege or inadvertent sexism, because he doesn't want to cause any trouble. I mean, he's a nice guy, after all.

The truth is, my husband directly benefits from male privilege. Male privilege is a touchy subject: there are many people — both men and women — who seem to honestly believe that we could all have the same opportunities or successes if we just worked a little harder and stopped allowing ourselves to be victims. But male privilege is not some elaborate myth perpetuated by coddled liberal snowflakes. It's alive and well, and it's hurting men and women alike.

Studies have shown that, on average, women make less money than men for similar work (even when they have comparable educational backgrounds and experience levels — and even when they literally perform better at their jobs), with women of color earning even less than white women do. Overall, women are more likely to be interrupted by their coworkers when they have something to say, and female college students are also less likely to speak up than their male classmates. Women with children are more likely to be considered less dedicated to their careers than men with children, but even childless women who might one day have children are judged more harshly by their employers. (Fatherhood, on the other hand, actually tends to boost the careers of educated white men).

Workplace inequality might not be an urgent issue or my preschoolers, but the effects of institutionalized sexism are. Probably within the next decade, my daughter will likely be targeted by school dress codes that will unfairly sexualize her body. She’ll also be more likely than her brother to be raped or sexually assaulted. And even now, at 4 years old, my daughter is more likely to be complimented on her appearance than her talent, and she is more likely to receive toys related to nurturing, housework or dress-up.

Raising a “nice guy” is ultimately problematic, because the fact that he is "nice" means he won't ever be required to push back against his own privilege.

That’s not to say, of course, that I think my son — or any other man — will automatically have a life free of challenges, or that he should somehow feel bad or guilty that the world happens to be tilted in his favor. But the fact that he will benefit from male privilege means that the bar for acceptable behavior will ultimately be set much lower. While women and people of color have to learn to work harder and take up less space just to be considered eligible for a seat at the table, it’s often enough for straight white men to just not be total jerks.

If my son is generally a nice guy, it won’t seem quite as awful if he happens to make an offensive or sexist or racist joke, or if he were to commit a crime — particularly if it involved an allegation of sexual assault. If he seemed more or less like a good man, it would help his credibility. (People would wonder if maybe his victim was leading him on, or they'd ask what she was wearing at the time).

As he grows up, my son will have the option to buy into feminism. At the very least, maybe he will come to realize, like his own dad eventually did, that being a feminist is the right thing to do — the nice thing to do. That will be better than nothing. But I hope that my son will one day understand that he doesn't just need to be a good ally. He needs to actively choose feminism, so he can stop indirectly perpetuating misogyny.

That might seem like a lot to put on my little boy's shoulders. But part of being a parent, it seems, is striving for a better life for you kids regardless, and hoping that they will somehow inherit a world that is at least a tiny bit better than the one you experienced. For both my son and my daughter's sake, I'd like them to believe that it's entirely possible to fight back against our culture's arbitrary messages about gender and power — messages that ultimately harm them both, albeit in different ways. It may not work out — and hey, I might fail completely and not even manage to raise a base-level decent guy. But because my son — and all of our sons — are absolutely worth it, I am definitely still going to try.

More Like This
13 Is "Too Early" For Kids To Be On Social Media, Surgeon General Cautions
The Best Travel Tips For Solo Parenting
14 Recipes For Sick Kids When Everyone's Tired Of Canned Soup & Crackers
35 Children’s Books Starring Black Characters
What Parents Are Talking About — Delivered Straight To Your Inbox