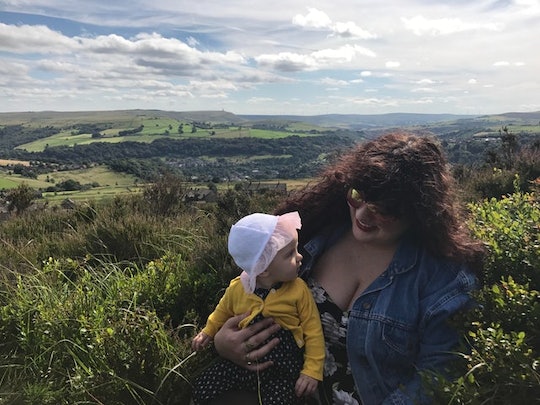 I'm So Over #Momspiration

You've seen it — the Instagram quote cards, the "before and after" photos of mothers on the weight-loss train, the people who have earned their #tandembabywearing badges, the professional photoshoots of moms and babies in designer gear out in the desert, all labeled with "#fitmom" and "#momspiration." I'm over it. I'm calling b.s. on anything that makes it seem like balancing personhood and parenthood is simple, and purports to "inspire" moms who barely have time to take a wet wipe to their armpits. I'm sorry, but your triumphs as a mom aren't fueling me to greater heights.

When you say something like, "I didn't lose myself when I became a mother... I became an even better person," I don't doubt that you're trying to be helpful. The trouble is that, in suggesting motherhood is a one-way turnstile to a ~better you~, you're invalidating the emotions some of us are experiencing. A lot of mothers do lose themselves after they have children. It's sure as hell a feeling I'm acquainted with. I don't feel like a better human. I feel worse. I love my daughter unconditionally, but I miss the person I was before I had her.

In 2010, Erica Jong lamented in the Wall Street Journal that we had "endured an orgy of motherphilia" stretching two decades. In 2012, the mom empowerment movement was underway, but "momspiration" took the form of a harmless interior design blog (pretty shelves, I have no problem with). In 2015, Us Weekly announced that "hottest accessory" at the Country Music Awards was a baby bump. Mothers fascinated us; pregnancies were major news. Then came the "tough as a mother" stickers and Etsy shops devoted to selling "mama bear" tees. By the time I had my own kid, the nervous desire to "celebrate" motherhood had turned into the largely commercialized #momspiration tag on Instagram and Pinterest.

My #momspirations are the mothers covered in sh*t. The ones who post selfies of what their faces look like after sleeping two hours a night for several weeks. The ones who haven't had any me-time in months, and are worried that they never will again.

Much of the momspiration messaging breeds the same discomfort for me. I don't want to be told that I'm wrong for feeling the way I feel. I don't need to see photos of your "new and improved" post-baby body, or have your baby-and-mom workout recommended to me by Instagram. I don't want to be made to feel like I'm somehow failing for not having my sh*t together enough to wash my hair, let alone clean the house, or hand-make my kid's knitwear, or take up latte art as a new hobby. Yet most of this stuff seems to suggest that I am.

You may turn to offer me a #momspiration koan like, "The problem is not the problem. The problem is your attitude about the problem," as though motherhood is truly just grace under fire and I just need to make some lemonade with all those lemons or donk a padded mallet on a gong and breathe out some "oms." The [admittedly well-intentioned] implication is that if I *will* myself to carve out 30 minutes in the day for self-care, then I will manage. If I *will* my daughter to sleep straight through the night, then she won't wake up every hour on the dot. If I make it look easy, maybe it'll start feeling that way.

The trouble is, I just don't buy it. Like so much of what we present on social media, #momspiration photos, articles, and memes all seem to portray a mother's best self. Maybe they're not lying. Maybe some moms do believe they are helping others by pushing their pulsing, tandem-babywearer energy out into the ether, and maybe they do feel as though they have it all figured out. I just don't think all of us do. Nor do I believe that, on top of all the pressure that comes with raising a child, we should be encouraging parents to aspire to perfection in all categories of life.

What I'd find a hell of a lot more inspiring is a dose of varied reality. My #momspirations are the mothers covered in sh*t. The ones who post selfies of what their faces look like after sleeping two hours a night for several weeks. The ones who haven't had any me-time in months, and are worried that they never will again. The ones who manage to go to work for eight hours a day, or who work from home alongside raising their little one(s), or who are stay-at-home parents, but who openly admit to feeling unbalanced. Maybe they miss their children when they're at work. Maybe they miss the office when they're at home. But they miss something — because having it all is never actually all that easy.

Motherhood ... can induce every feeling possible, all within the same day. I suppose that's what I want to see in #momspiration narratives.

You may think I'm being a grouch. That I'm discouraging parents from relishing how awesome they feel, or that I want everyone to be as miserable as I am. But I just want more people to admit that their version of motherhood is never going to be anyone else's version. I want more people to acknowledge that this is OK.

Motherhood can be weird, complex, exhausting, and overwhelming. It can be fulfilling and beautiful and make you feel like you're sitting on a mountain, looking at the entire world in a wash of colors. It can induce every feeling possible, all within the same day. I suppose that's what I want to see in #momspiration narratives. I want the good, the bad, the ugly, the sh*t-stained, and everything in between.