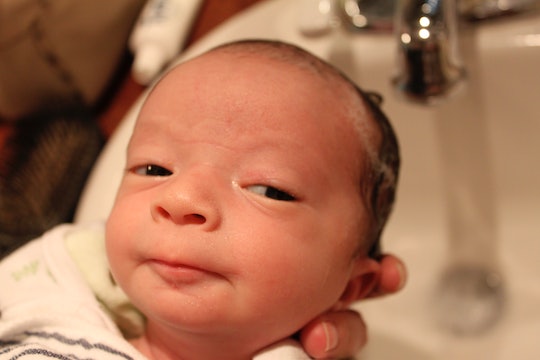 I'm Terrified Of Having Another Baby

Recently, I got some news that I'd been hoping to receive for years: According to the medical team that works with my daughter Esmé, who has four known genetic mutations, the chance of having another child with my daughter’s complex medical conditions is believed to be less than 1%. I have been awaiting this news forever because I have always wanted more children, but I have been terrified by the possibility of having another child who might be as medically fragile as Esmé, who will need life-long care.

This news from Esmé’s doctors should be good. It should be. But, like so many things in life, the reality is more complicated than that. Because while the news that I likely won't have a child with similar genetic mutations should make me feel hopeful, I also feel a lot of apprehension and fear.

In order to explain why this is, I need to explain a few things about my daughter, her genetic mutations, and the strange and changing world of what genetic science can — and can’t — know. There are a lot of grey areas in genetic science between the known and unknown, and I'm used to living on this fence. However, as I think about having another child in the midst of these unknowns, it becomes another thing entirely.

Esmé was born fragile and struggling in January 2011. When she was just hours old, we were told that her floppiness (low muscle tone), heart abnormality, and difficulty breathing were likely complications from some form of unknown genetic disorder. Still, in some ways the reality of her having a serious genetic disorder did not fully hit me until she had cardiac and respiratory arrest when she was three months old as a result of these complications. When she was around 9 months old, her seizures started; she'd have them weekly in clusters, having on average 15 seizures over 24 hours. From there the list of her symptoms just grew: poor growth, developmental delay, kidney problems, repeated infections. Esmé’s 6-year life has been an entirely uphill battle.

I would hope that having a sibling like Esmé would help my potential future children grow into compassionate and generous adults.

Before Esmé was born and for some time afterward, I had always imagined myself as the mother of two children. Since Esmé’s need for life-long care became clear, the idea of having a larger family seemed increasingly compelling. As I imagined it, siblings for Esmé would be playmates who are attuned to her and her needs, and they could become her caregivers as her father and I age. They would also, by necessity, learn a degree of selflessness that comes from having to put another person’s safety above your needs. I would hope that having a sibling like Esmé would help my potential future children grow into compassionate and generous adults.

Understanding the cause of Esmé's conditions and understanding why she has had to fight so hard to survive and thrive has also been a battle. Over the past four years, genetic testing has uncovered four separate genetic mutations. They are located in the following genes: PCDH19, SCN8A, TBL1XR1, and MAP3K7. These mutations are extraordinarily rare: for example, the known population with SCN8A mutations — which can cause severe epilepsy and developmental delay — is about 150 worldwide. MAP3K7 mutations have been identified in fewer than 10 cases so far and are thought to cause growth delay as well as joint and cardiac abnormalities.

Genetics is not nearly as cut and dry as so many of us tend to think.

The combination of even two of these mutations, let alone all four, has never been seen before. Thus, my beautiful daughter is absolutely one of a kind from a genetic disease perspective. Still, while we know these mutations exist, the correlation between them and her symptoms remains somewhat unclear. There is no over-arching term to call what Esmé has (except for the made-up one we use, the Cute Syndrome).

Genetics is not nearly as cut and dry as so many of us tend to think. We hear stories all the time about the wonders of modern genetic testing—the ability of such testing to help with pre-implantation diagnosis for families with known genetic risks, such as achondroplasia, or to screen prenatally for common syndromes like Down syndrome. However, when we begin to discuss disorders that are far more rare or genetically complex — like the kinds of tiny mutations that are at the heart of the discussions of my daughter’s genetic status — things become much less black and white.

This means that while there is a lot of growing hope for understanding the genetic mutations in this world, it can also be a very lonely place to wait in while wondering what science will eventually tell us about what has made our child so sick. As you might imagine, this discussion makes my head spin daily, because it's filled with so many questions and so many grey areas that I could manage to spend the rest of my life calculating risks before deciding to have another child.

Intellectually, I understand that there is no such thing as reducing risk to zero. At the same time, though, I have a hard time believing that the most current form of Esmé’s genetic testing information won’t change again, or that the doctors didn't miss something.

Intellectually, I understand that there is no such thing as reducing risk to zero. At the same time, though, given how rapidly the world of genetic testing changes, I have a hard time believing that the most current form of Esmé’s genetic testing information won’t change again. I have a hard time thinking that something wasn’t missed or that the classification of the now-benign genetic mutations that have a high likelihood of repeating might change in the future, as it has in the past.

I am also terrified because before Esmé was born, we had every reason to expect to have a genetically healthy baby. Other than a scare during our 20-week ultrasound that seemed to be cleared by an amniocentesis, we expected to have a healthy baby, as most people do. Now, however, I realize that of course all kinds unexpected things can happen. So, as I think about another child my fears extend to unrelated disorders that are far, far more likely to occur than what happened to Esmé. That expectation that such things happen only to “someone else” has been swept away entirely. It has been replaced with the understanding that such things happening are a beautiful gift of a very special variety. A difficult gift…a gift that I would be bound to accept, even though I am not certain I could handle another time around.

Loving Esmé has lifted a veil off of the naïve assumptions that so many of us make about what modern medicine can offer at its limits, how many answers science can provide, and what a leap of faith is inherent in the decision to have children.

For me, Esmé’s disorders have uncovered so many deep and dark things about the truth of life’s unpredictability. Loving Esmé has lifted a veil off of the naïve assumptions that so many of us make about what modern medicine can offer at its limits, how many answers science can provide, and what a leap of faith is inherent in the decision to have children.

And, like so many things, once the veil has been lifted, it is impossible to forget what you’ve seen.

As I sat with Esmé’s doctors, poring over the recently updated genetics report, listening to them say that in their opinion the chance of having another child with Esmé’s conditions was likely less than 1%, I struggled to believe them. I looked at these two medical professionals at what is arguably the best children’s hospital in the world and asked them to please help me understand how I could have faith in what they were telling me — faith enough to wager the life of another child.

Then I said, a sob welling up in the back of my throat, “I can’t have another baby that I am afraid will die in my arms. I just can’t do it again.”

For some time, I've been afraid of having another child. For years I have avoided looking at small babies, because seeing and holding them fills me with an embarrassing mixture of longing, jealousy, sadness, and fear. But I didn’t understand the depth of this fear until I was sitting across from Esmé’s doctors, knowing my daughter was safely out of earshot. I looked at one of them and told her how I don't understand the naïve trust of other women, their bellies swollen and proud.

“I don’t understand how they just believe it will all be OK," I said to her. And how, for most of them, so much of the time, it is OK. Over and over, it is ok. It seems impossible. Really, how is it even possible?” Then I said, a sob welling up in the back of my throat, “I can’t have another baby that I am afraid will die in my arms. I just can’t do it again.”

When it comes right down to it, there is nothing in the world that can tell me it won’t happen again. The medical and scientific research has taken this knowledge as far as it can possibly go at the moment. Esmé’s doctors have assured me there is no reason to consider complex fertility procedures to avoid genetic risks. At the same time, before I had Esmé I had no reason to think we’d be at risk, because the chance of ever having a child with Esmé’s collection of mutations is effectively zero: one birth in 7.4 billion. But it happened. It happened to me, to my daughter. To my family. How do you calculate that?

Most women thinking about having a second child are not thinking about these things. They are remembering the snuggles and tiny clothes…or, less fondly, the diapers and sleepless nights and cracked nipples and stretch marks. I, on the other hand, see little baby clothes and I want to throw up, because my thoughts of pregnancy currently begin and end at the many moments that Esmé, my sweet tiny child, lay in my arms turning blue, and I was certain that she was going to leave me here, without her.

Still, I know I want another child. At least one. I know it in my heart, because I still imagine those children that I long for. I can see them in my mind holding my hand, speaking to me in the way that Esmé cannot. I can imagine them curling up in my lap, or yelling obnoxiously in my direction in need of something, or slamming their bedroom door.

I can imagine them laughing and crying and needing in all the typical ways.

I hope that somehow I will find my way to them.