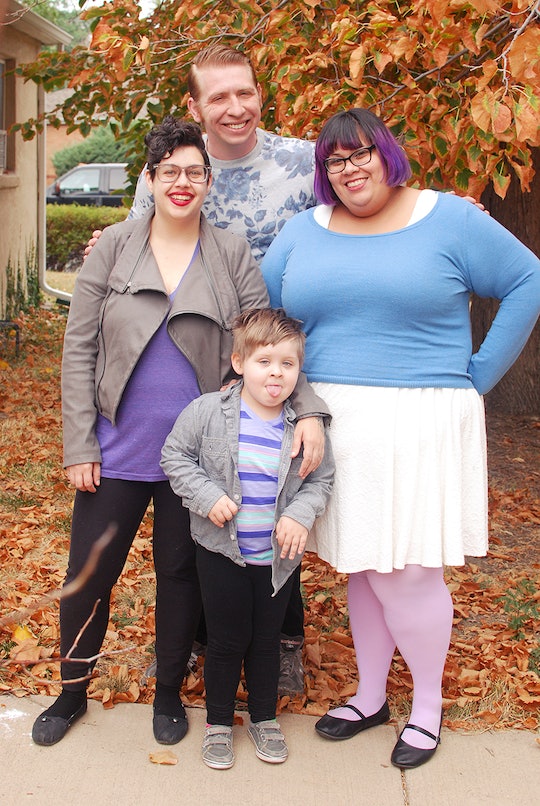 Co-Parenting Is Difficult When You're Trans

Parenting is difficult any way you cut it, but it gets even more complicated when you and your co-parent (or co-parents, in my case) don't bring the same life experiences to the table. That's the case in my family. My kid, Arthur, has three parents: me; his mom, Sam; and his dad, Jon. Our family is built on a bedrock of love, but all three of us came to parenting from different places. For instance, I'm transgender, as is our kid. Sometimes, my gender identity makes it difficult to parent with my partners.

All three of us have a different constellation of identities. Sam is a person of color, and both Jon and I are white. Both Jon and Sam are cisgender, while I am a non-binary transgender person, which I don't identify as either a man or a woman. The gender binary — i.e., the cultural construction of masculinity and femininity — does not feel authentic or useful to help me define myself. Like many (but not all) non-binary people, I identify as transgender, because the gender I was assigned at birth feels uncomfortable to me.

My gender identity means I have had life experiences informed by oppression and stigma that my partners will never have. Because I have a transgender son, it's also an asset: I can engage with him on a different level than my co-parents can. I think my perspective is valuable, and that being a transgender parent means that you bring to your family an understanding of the multifaceted nature of gender, as well as the deep need to respect other people's self-identification. The sooner we can teach our children to respect other people's gender identities, the better.

Jon and Sam are generally respectful about trans issues. If they weren't, I wouldn't live with them, and I wouldn't be raising a transgender son with them. They do a ton of truly wonderful things. When they read with Arthur, sometimes they change the pronouns of a character to match mine (they/them) so that he sees non-binary people like me outside of our home. They also looked at the calendar and figured out the date halfway between Mother's Day and Father's Day, so they claimed it as Baba's Day for me, because Arthur calls me his Baba. All of these little gestures go a long way to validate my existence as both a parent and someone who is trans.

But still, they are cis, and I am trans, and there is a gulf of experience between us. I've dealt with systemic traumas, such as constantly being misgendered, and they have not. There are times when what I do or how I react as a parent is very much driven by my experience as a trans person, and that's not always immediately clear to my co-parents.

The sooner we can teach our children to respect other people's gender identities, the better.

For example, I have a very strong need to let Arthur tell us when he needs a haircut, instead of the other way around. This is rooted in my history as a trans kid with parents who did not listen to me about my own hair and what it signified, and how it made me uncomfortable. I hated my hair. I hated how it marked me so visibly a girl. I wanted to feel comfortable, and for me that was the ease of having short hair. But my parents, very explicitly, refused to take me to get my hair cut, because they didn't want me to look like a boy.

When you're a kid, you don't have the technical language to explain gender dysphoria, but you are pretty clear about what you want and you're pretty good about articulating how miserable you feel. Being told to stay miserable because looking the way you want embarrasses your parents sends a toxic message to a kid: that your desire as a parent to not have a gender non-conforming child is more important than their comfort and self-acceptance. That was my history. I don't want it to be my son's.

It's not that Jon or Sam disagree with me about issues like whether or not Arthur should get his hair cut. It's that I need to explain where I'm coming from before they can understand. For them, it's just a haircut. For me, it's a lifetime of trauma. It's a minefield. It's all this baggage I have to unpack in order to even explain why I'm reacting to the situation in the first place. That's what makes co-parenting with cisgender partners so difficult. I can't always predict what parenting choice is going to hit a nerve, and neither can they. The conversations about my gender identity and how it informs our parenting don't happen with the big decisions, but with the small, day-to-day ones.

Co-parenting as a trans person with cisgender people is complicated. It just is, and it always will be. Co-parenting with these particular cis people is wonderful because they are wonderful, but sometimes they mess up, because they are human. It just happens. Would I parent with anyone else? No. Would I rather parent alone? Definitely not. Our family chugs along, but only because we all put a lot of work in. Sam and Jon do their best to show up for me, and I do my best to show up for them.