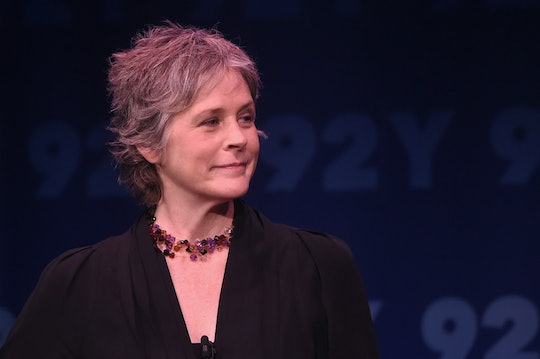 Is Carol Leaving 'The Walking Dead'? Melissa McBride Hasn't Hinted About A Departure

Carol taking a leave of absence from the group on The Walking Dead in "Twice as Far" came as a surprise, an unexpected ending to an episode that had already dropped one shocking bomb in the form of Denise's demise. Though we had watched her battle for weeks with personal doubts that only seemed to grow, it was still unexpected for Carol to try to resolve her issues by leaving town. She is definitely gone, but is Carol leaving The Walking Dead for good?

This wouldn't be the first time Carol has left the group, which bodes well for her continued presence on the show, but it is the first time she left by choice – which bodes a little less well. The last time Carol went MIA, it was during the group's stint at the prison in season four, when Carol's, uh, unusual methods of protecting everyone led to her being ejected from the group. During an outbreak of disease, Carol took matters into her own hands and killed the first two people who got sick to try and stop the illness from spreading. That creates a pretty stark contrast to now, when Carol has left Alexandria specifically because she doesn't want to have to kill anyone anymore.

Actress Melissa McBride, who plays Carol, hasn't hinted at exiting the show, though the cast of The Walking Dead is notoriously tightlipped about spoilers. Her Twitter makes no mention of Carol's ultimate fate, and her interviews haven't been forthcoming, though McBride has mentioned reading the script for the season six finale, which would logically imply that she's going to be around at least until then.

Carol is right up there with Rick, Daryl, and Michonne when it comes to major characters whose standing seems relatively solid thanks to a mix of fan devotion, narrative usefulness, and badassery. Some characters aren't exactly missed when they bite the dust (sorry, Jessie and her entire family) but Carol would leave a real hole in the show if she were gone for good.

If she ever did go, it seems a lot more likely that the show would try to milk her exit for a truly iconic death scene (like they've done with Glenn, say, five or six times by now) instead of just allowing her to slink off into the night. Though there is no definite word on Carol staying or going, it seems a lot more likely that she's being sent away so she can save the day later – just like she did at Terminus (which the show specifically brought up this season, perhaps drawing a comparison fans would do well to be mindful of).

In an interview with Variety, McBride said, "...something’s going on and there’s much more story to be told," which definitely makes it sound like Carol is sticking around for a while. Her journey has been interrupted, but it's not over.