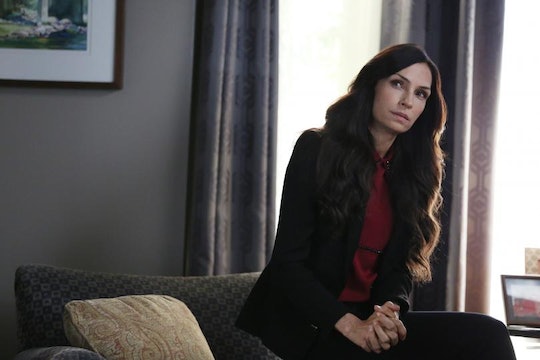 Is Eve Dead On 'How To Get Away With Murder'? Annalise's Ex Will Be Back This Season

On each Season of How to Get Away With Murder, there is a running mystery that the Keating Five are somehow involved in. This Season, things are really no different, but the kicker is that one of them, or someone close to Annalise, is going to be discovered dead by the end of the Season. But of all of the contenders, is Eve dead on HTGAWM? She is Annalise's ex-girlfriend and the two have a serious history together that goes back way before Nate was ever in the picture, and who else could elicit such a strong reaction from Annalise upon seeing the body under the sheet?

The last time we saw Eve was last Season on HTGAWM when we learned more about her past with Annalise and saw the two rekindle something briefly in present day. She eventually went back home to New York, but she is still one of the most important people to Annalise right now. You can't really imagine Annalise crying like that over, say, Michaela, under the sheet on the gurney, but if it was someone like Eve, it would be plenty believable. You also have to assume that whoever died on HTGAWM was in Annalise's inflamed house, which could very well be Eve, who may have come back to town for yet another visit.

So, is Eve dead on HTGAWM? The lawyer and ex-girlfriend BFF of Annalise played a pretty solid role last season and if you remember, Wes was in New York to see his dad in the Season 2 finale, but Eve also lives in the city. It's totally possible that, though we didn't see it yet, Annalise sought her out for help when she found out what had happened with Wes, watching his father shot in front of him, or asked her if she had any leads as to who shot Mahoney. Of course we haven't yet seen any evidence of this, but Eve didn't really get a solid, official good-bye, so there's no way she's gone forever just yet.

HTGAWM Executive Producer Pete Nowalk told AfterEllen.com that Famke Janssen will be returning to Season 3 as Eve, giving us all hope that even if Eve doesn't die on HTGAWM, we'll get some sort of closure for her character and her connection to Annalise.

But the person under the sheet on HTGAWM has to be someone close enough to Annalise to make an impact on her and the viewers too, though not someone who isn't expendable. As sad as it is to say, because Janssen is brilliant in whatever part she takes on, Eve is expendable this Season. Thy could get rid of her and though it will tear Annalise apart, it won't change too much in the way of the Keating Five.

It will also make it possible to usher Frank back in the picture, to help Annalise figure out who set fire to her house (provided, of course, that he didn't do it himself) and give him a way to redeem himself in her eyes. Well, as much as one can redeem themselves after inadvertently being the cause of your unborn baby's death, anyway.

If Eve is dead on HTGAWM won't be easy for Annalise, but Eve is kind of the perfect victim to elicit such an emotional response from Annalise.