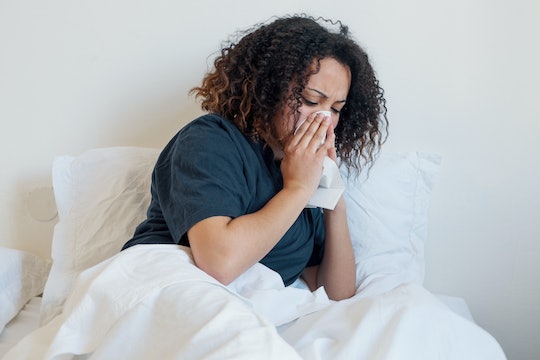 No Seriously, Is Flu Season Over Yet?

According to the Centers for Disease Control and Prevention (CDC), this year’s flu season has been horrifying and a huge bummer. Obviously, the CDC didn’t word it like that, but they did say that it’s the most widespread flu in years, and it has affected 49 states this year. With the warm temperatures coming (in some places, at least, sorry Northeast) and the first day of spring behind us, are we finally free? Is flu season over? How much longer should we be on high alert about looking for signs, symptoms, and ways to boost immunity against the flu?

Typical flu seasons tend to last from mid-winter through the beginning of spring. But as we know, this flu strand is anything but typical. As of March 16, the CDC noted on their website that flu activity has “continued to decrease in the latest FluView report, but it remains high across much of the United States.” But, good news: the amount of folks visiting their doctors for flu-like symptoms has dropped to 3.3 percent from 3.7 percent, according to the CDC. A Romper article reported that even though the flu season may have “plateaued” in early February, “due to multiple factors, such as the virulence of strain and the effectiveness of the vaccine made for this season, this year's flu seems to be hitting its peak later in the year than in previous seasons.” And the article said that the CDC noted, with this strand, the flu season could potentially last until May.

How is the length of a flu season monitored and determined? The Cut reported that this is determined by “influenza monitoring systems,” which are observed by the CDC and “individual state health departments." Dr. Paul Biddinger, director of the Center for Disaster Medicine and vice-chairman for emergency preparedness at Massachusetts General Hospital in Boston told The Cut, "They look at a variety of different variables, including the laboratory-confirmed cases in hospitals and doctors’ offices."

So don’t let your guard down just yet. It’s still important to stay vigilant about washing your hands frequently, wiping down surfaces in your home daily — including bathroom faucets, countertops, light switches, and even walls — avoiding crowded and enclosed places, and wearing a mask to prevent yourself from spreading germs or to prevent germs attacking you. If your kid is feeling under the weather, keep them home from school or day care, and teach them to cover their mouths with their elbows instead of hands. Other ways to boost your immunity and your child’s immunity to the flu include getting plenty of rest, giving elderberry syrup a try, having a diet rich with healthy vegetables and fruits, and staying hydrated. Also, if your kid is old enough, maybe you can share a chewy vitamin pack of vitamin C and zinc? It couldn’t hurt, right?

But the number one thing you can do even still is get vaccinated. Even though the vaccine is only 10 to 30 percent effective according to The Washington Post, if you do end up getting the flu, being vaccinated will help it be way less severe and you’ll be rid of the nasty virus sooner than if you didn’t get vaccinated.

So make sure your family’s vaccines are up to date, keep those hands clean, and try to eat right, stay hydrated, and get plenty of rest for just a little while longer. Hopefully soon you won’t have to worry every time you leave your house to go grocery shopping or to hop on a train to commute to work. The end is near, but we still aren’t out of the woods 100 percent yet.