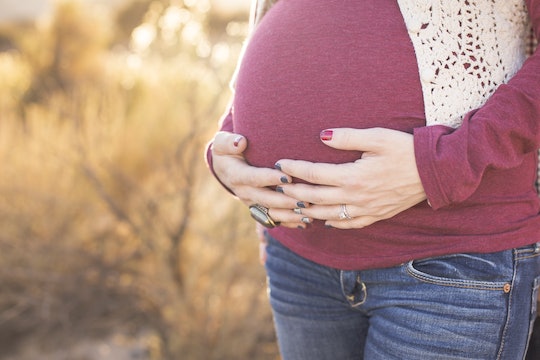 Is It Hard To Get Pregnant With Twins? Experts Weigh In

If you grew up with twins in your school or neighborhood, then chances are you were like me and found their uniqueness a bit enviable. They walked around school glued at the hip, had a bond shared only by duos who inhabited the same womb, and Madonna'd the hell out of their status when people simply referred to them as “the twins.” But now that everyone is (kind of) an adult and building their own families, there are some who wouldn’t mind having a pair of children. But is it hard to get pregnant with twins? There isn't a fool-proof plan, but doctors say there are some scientific factors that can influence your chances.

“Twins occur in about 1 percent of naturally occurring births,” says Dr. Salli Tazuke, co-founder and co-Medical Director of Colorado Center for Reproductive Medicine in San Francisco, California, in an email interview with Romper. “Most of them are the so-called ‘fraternal’ twins where two separate eggs were fertilized by two separate sperm and implanted in the uterus.”

In contrast, Tazuke explains, identical twins occur when a fertilized egg splits into two embryos or fetuses, but that “rarely occurs naturally.”

First, indulge me in a few statistics. Dr. Steven Hausman, president of Hausman Technology Presentations and a former research scientist at the National Institutes of Health, tells Romper in an email interview that fraternal twins are about twice as common as identical twins, and they are much more likely to run in families. Factors that can influence the likelihood of fraternal twins include maternal age, race, and even being a twin yourself. Hausman says black women are also statistically more likely to have fraternal twins than white women. On the other hand, fraternal twins are less likely in Asian and Hispanic populations.

In the case of identical twins, Tazuke says twinning is most often the result of fertility medications that cause “superovulation” or the choice to undergo in vitro fertilization (IVF) and have more than one embryo implanted in the uterus. But Tazuke cautions that fertility treatments should not be used as a means for increasing the chance of conceiving twins.

“These days, the goal of pregnancy is to have a healthy mother and a healthy baby,” Tazuke says. “Since twin pregnancies have much higher risk than a singleton pregnancy, it is not recommended to try to have twins on purpose.”

But if twins are the name of your game and you have discussed it with your healthcare provider, then there are a few nutritional tips that are said to increase your chances of having multiples, including eating wild yams (cassava root) and dairy products. Folic acid for women and zinc for men has also been shown to boost chances of a twin pregnancy.

As for that sought-after twin fame? I hear being a mom of twins can make you feel like a superhero.

More Like This
A C-Section Actually Doesn't Take As Long As You Think, According To Experts
Can The Way You Sleep Really Turn A Breech Baby?
Are Movie Theaters Too Loud For Pregnant People? OB-GYNs Explain
All Your Questions About Getting Pregnant After A Tummy Tuck Answered