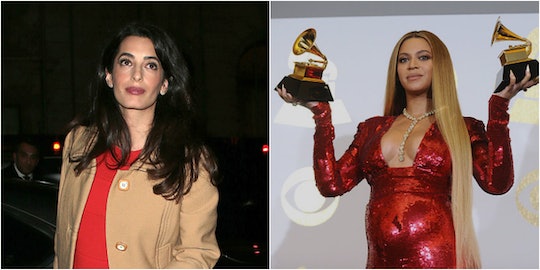 When Beyonce dropped the photos from her Push Party recently, like all the other mere mortals on the planet I was in complete awe of her. She looked beautiful as always, with a goddess vibe that I never, ever had when I was pregnant with my own twins. Similarly, when I see photos of Amal Clooney rocking her twin bump on the red carpet, I'm struck with a combination of admiration and jealousy, because I'm four years postpartum and still can't walk in heels.

I used to think that having twins was an incredibly magical experience. the closest you could get to being an actual unicorn. In fact, when I learned that I had serious fertility issues and IVF was my only hope for conceiving, there was a part of me that was excited, because I always thought having twins would be so much fun. I wanted my child to have a sibling, and this seemed like an easy way to make it happen in one fell swoop. I thought it would be simpler to go through the tough parts of parenting, like sleep training and potty training, with two kids at the same time, instead of struggling with each child individually. I liked the idea of toys getting twice the use without having to find storage space to save them between babies. And I loved the thought of only having one round of stretch marks.

When my reproductive endocrinologist warned me that I had a good chance of having twins if we transferred two embryos and asked me if I wanted try and implant one embryo instead, I didn't think about the scary statistics he had mentioned like the increased risk of birth defects with twins or the fact that 21-30% of twin pregnancies result in vanishing twin syndrome, where one baby is lost. Instead, I immediately thought of twin moms Mariah Carey, J.Lo and Sarah Jessica Parker. I'd seen adorable photos of them with their twin babies. Did I want to be as fabulous as them? You bet I did.

Being pregnant with twins made me feel like a celebrity in my own right. Maybe not an A-lister, but one of those women who randomly pops up now and then on an episode of SVU.

I'll admit that when I first announced I was having twins, I felt like a rock star. My friends, family and coworkers fawned over me. My cousin who was pregnant at the same time with a singleton was practically ignored, which the petty part of me enjoyed, since she's always been super competitive with me. (Yes, this makes me awful, but it also makes me honest.) Being pregnant with twins made me feel like a celebrity in my own right. Maybe not an A-lister, but one of those women who randomly pops up now and then on an episode of SVU.

I understood why so many people were freaking out. After all, people love babies in general, so when you announce that you're having two, they get even more excited over it. Babies are like puppies. The more you have, the cuter it is.

As much as I was enjoying all the attention, however, I really wasn't anticipating that I'd be getting even more attention from doctors. Not many people know that being pregnant with multiples automatically classifies your pregnancy as high-risk. This means more frequent doctor visits, as well as more ultrasounds and testing. While around 20% of singleton pregnancies involve some form of bed rest at some point, a staggering 70% of moms who are pregnant with multiples end up on bed rest.

There are also financial implications that come with having twins. Even if you breastfeed to save the expense of formula and forgo toys and pricey matching outfits, there's still diapers and eventually solid food to buy. If you want or need to return to work, that's double the cost of childcare. And if you want to help your kids with college at all, you need to be prepared for two tuitions at the same time.

It may seem like being pregnant with twins is all about taking rocking bump shots, but there's a ton that goes on that no one talks about.

Amal, Beyoncé and other celebrity twin moms are understandably private about the details of their pregnancies. But it's safe to say the financial security of their families aren't in jeopardy because they're having twins. And in the event that they are advised to post up in bed until their due date, they're unlikely to lose their job as a result of taking too many days off, as I did when I was told to go on bed rest 27 weeks into my pregnancy in an effort to stave off premature labor. The same goes with being able to pay for their medical bills as a result of all the additional visits and screenings required in a high-risk pregnancy. It may seem like being pregnant with twins is all about taking rocking bump shots, but there's a ton that goes on that no one talks about.

Then there's the delivery itself. Being pregnant with twins means your babies are more likely to have complications, the most common being premature birth. But there are other things to worry about too, like low birth weight, growth problems or twin to twin transfusion syndrome, a potentially dangerous condition that can affect identical twins when one twin has a greater blood volume than the other.

My own twins were born prematurely, at 33 weeks and spent time in the NICU before coming home. While they don't have any lasting health issues, the experience was far from fun, and I wouldn't wish it on anyone.

Of course, plenty of women get pregnant with twins and carry them to full term with no complications. But I also know that celebrities are human too. Sharing amazing pregnancy photos or stepping out on the red carpet with your twin bump as your stand-out accessory doesn't change the fact that these are real women whose bodies are doing something incredibly difficult. I'll be just as excited as everyone else when Beyonce and Amal's future world leaders/Grammy winners make their appearances, but until then I'm sending good thoughts into the universe, from one twin mom to these others, because I remember how tough my pregnancy was.