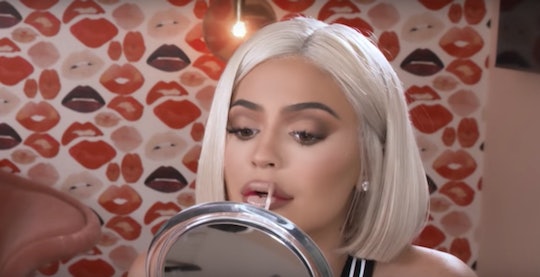 Will Kylie Jenner Take A Maternity Leave From Her Million Dollar Beauty Empire?

At just 20 years old, Kylie Jenner has accomplished more life goals than most people do by middle age. She just had a baby, she's a world famous personality and influencer, and she's the CEO of her very own company. So now that she's a new mom, is Kylie taking maternity leave from Kylie Cosmetics or will she try to work form home and run things from afar?

It's not clear if she's taking time away from her company or what the policy is for her other employees at the moment. Romper's request for comment from Kylie's team was not immediately returned. In August 2017, when she was already pregnant, the young makeup mogul complained that no one took her seriously as a CEO, so hopefully she doesn't feel pressured to do anything just to prove a point, though when it comes to returning to work after a new baby, every woman's different.

The brand also had a new product release just last month when we now she was just weeks away from having her baby daughter. She posted on social media and hyped the launch as she always does, but there's no telling whether she worked behind the scenes as well. Given what we know about her work ethic and love for her brand, though, it's likely that she did on some level.

It's no secret that Kylie doesn't exactly have a job like the rest of us do. That's not to say she doesn't work hard, but given her family's wealth and fame, she can likely manage some of her day to day CEO duties right from one of her four gorgeous Calabasas homes.

Obviously, taking parental leave is not the same as working from home. But bonding with a new infant is only one reason to take a few months off after giving birth. It's also because it's a huge transition and it takes some time to get used to having a tiny person around and keeping it fed and happy.

While also allowing her body to heal, Kylie certainly has a huge support system of family, friends, and staff to help with the logistics, so if she wanted to make a marketing video or hit up her colorists to suss out the details of the next line, she could make time without having to go into an office (if she ever did anyway).

It's always hard to tell where the personal ends and the professional begins with the Kardashian and Jenner family, and for Kylie especially. She essentially grew up on her family's show, Keeping Up With The Kardashians, and eventually followed in her sister Kim's footsteps, by becoming a social media celebrity, hosting club nights, then starting a clothing line with Kendall (Kim, remember, started Dash with Khloé and Kourtney), and eventually building her own beauty brand.

Everything with this family is both personal and profesh all the time. Even her pregnancy turned into what felt like a marketing blitz for the family, but laying low and out of the spotlight for nine months might be the new normal, maternity leave or not. Although she's spoken at length before about not being a celeb and wanting to just quit Instagram when she has a family, her makeup line is closer to her heart. She's said of her company, according to People:

I never imagined that Kylie Cosmetics would grow to what is has. Being my own CEO has definitely changed my confidence. Having Kylie Cosmetics keeps me going. When I first launched Kylie Cosmetics, I ordered a really small amount and I was almost certain it wasn’t going to sell out. My mom calmed me down and was like, ‘It’s gonna be fine, Kylie. You’re gonna do great.’ None of us knew how big it was going to be.

She obviously loves her company and her job, just like so many other new moms do. Kylie just might have the rare privilege of being the only new mom whose parental leave also happens to look a whole lot like the rest of her days at work. Nice gig if you can get it, right?