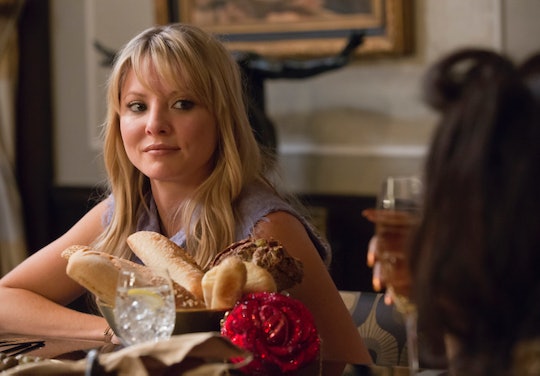 Is Rhonda Returning To 'Empire' Season 3? She Might Not Have Survived

From the beginning, Rhonda was the sort of ride or die member of the Lyon family who made it seem like every member of the core family in Empire was untouchable. Then, last season, she lost her baby after being pushed down the stairs by Anika and in the Season 2 finale, she had yet another scuffle with the BFF-turned-rival, this time on a high rise balcony. So is Rhonda returning for Season 3 of Empire? The last we saw of her, she was shuffling around with Anika, and had apparently slipped in for the sole purpose of killing the woman who'd tried to kill her first. But before they could shove either one of each other off the balcony, Andre came upon them in time to shout an anguished, "No!" as someone presumably fell to her death.

Now, it would be easy to say that Rhonda died on Empire or that Anika was pushed off the balcony and that's that. But there is still the possibility of Season 3 beginning with one of the women hanging on, literally for her life, before Andre manages to help her up. Or, a very dramatic and soap opera-esque scene that is totally Empire with whoever falls having her fall to the ground cut short by an awning and then spend the first half of Season 3 of Empire in a coma.

Either way, the cast of Empire has been able to keep pretty quiet about the fate of Rhonda so far. Taraji P. Henson (Cookie Lyon) recently revealed that while the cast knows the fate of Rhonda and Anika, they won't be revealing any solid details until Season 3 premieres on September 21. Henson revealed in an interview with Extra that "Yeah, someone dies," so if this means that one of the women doesn't survive the fall, will it be Anika or Rhonda?

If Rhonda Survives And Anika Dies

Recently, Trai Bryers (Andre) said that "If season one was really Jamal’s season and season two was very much Hakeem’s, then season 3 is gonna be Andre’s,” which could mean a number of things. But if Rhonda survives, there is still plenty of cause for concern. Andre helping to cover up their part in Anika's death is one, but also Andre's inevitible guilt that he is sure to feel, even if letting Anika die meant saving his wife.

If Anika Lives And Rhonda Dies

If Rhonda doesn't return to Empire, be it the actress's schedule or the fact that she recently got married in real life and wants to take a long break in general, or that Rhonda's story has simply run its course on Empire, then that would leave Anika prevailing. It would also entail a scenario where Andre is left feeling guilt over not being able to save his wife, but also being forced to see Anika every day. There's a quick scene in one of the Season 3 promos which shows Andrea being arrested on a street outside of a house. Could it be Anika's?

If Neither Of Them Die

Another possibility, which isn't awful, is that neither Anika or Rhonda die and both return to Season 3. The "No!" called out by Andre was just a red herring and, as we'll see in the season premiere, he was able to save them both. But, through some complication or scuffle, Anika loses the baby in this scenario, confirming Henson's claim that there's a death this season and adding to the anguish Andre could be dealing with all season long.

Obviously the death of a loved or even extremely hated character is always a move to bring lots of emotion and reaction from fans (look to Game of Thrones, if you have any doubts about that), but the fact is, both Anika and Rhonda are necessary characters to the show. Anika is a subtle and calculating villain, a necessary evil, and Rhonda is the person who keeps Andre grounded, for the most part. In a perfect world, neither of them will be dead and they'll both be returning to Season 3 of Empire to continue sparring.