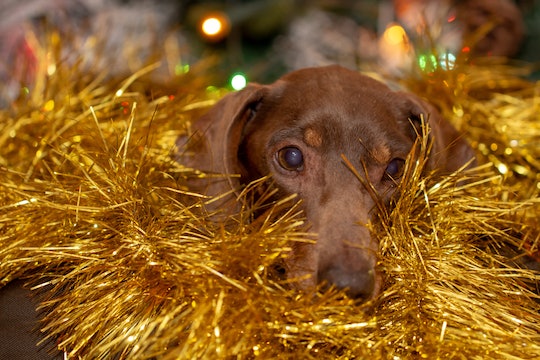 When I was a kid, I grew up in a house full of rescue animals, and every Christmas, I knew that our family wouldn’t be getting two things all the pet-free families got — poinsettias and tinsel. My mom and dad also grew up with animals and worked in animal rescue before having me, so they already knew the drill (poinsettias = poisonous). But some first-time pet owners might be wondering, is tinsel safe for dogs? What happens if they accidentally ingest it? Because as anyone with a dog knows, they love to eat some pretty dumb stuff. And tinsel just happens to be both very pretty and a very dumb thing to eat.

I asked Dr. Jacqui Braer, a veterinarian in Southwest Virginia, about what happens if your dog accidentally ingests some tinsel, and the results aren’t very good. “There is always a potential for pancreatitis and foreign body obstruction as the worst case scenarios,” Braer says. “Vomiting and diarrhea are definitely a possibility when eating anything they shouldn’t. If the pancreatitis is severe enough, the dogs end up having to be hospitalized." If your dog does ingest tinsel or anything they shouldn’t have, it should take about 10 to 24 hours for the “foreign body” to move through the digestive tract, according to the Pet Health Network. If you don’t see whatever they ate in their poop, you can assume it’s stuck, which is not a good situation to be in.

“If the tinsel gets stuck, surgical removal is required. Both [situations] can be very serious and potentially deadly,” Braer says. Yikes. However, she says you don’t have to get rid of tinsel completely if you love it so. “I think tinsel is fine if its secured appropriately and in an area that dogs don’t have ready access to,” says Braer. “If your dog is prone to eating dumb things or gets into things, I would not put it up. And I would always supervise pets around all Christmas decorations,” she adds.

Out of curiosity and wanting to make sure my pets are as safe as possible during the holidays, I asked Braer about some common occurrences she sees on a regular basis in the clinic during the holidays. “We do typically see an increase of foreign bodies during the holidays, usually related to the Christmas tree or decor around the house, as well as pancreatitis because of table scraps and holiday treats. Chocolate toxicity also becomes pretty common, and poinsettias cause vomiting and diarrhea in dogs and cats,” Braer says. (So my mom and dad were also right about the poinsettias. Duly noted.)

To be safe, perhaps keep the tinsel and poinsettias out of your house during the holidays if you have critters. And maybe keep the ornaments high enough so Fido can’t get a taste. Of course, you probably already keep your ornaments higher up or don’t put any up at all if you have a toddler. Just think of dogs as tiny toddlers who never grow up, and that way everyone will have a fun and safe Christmas.