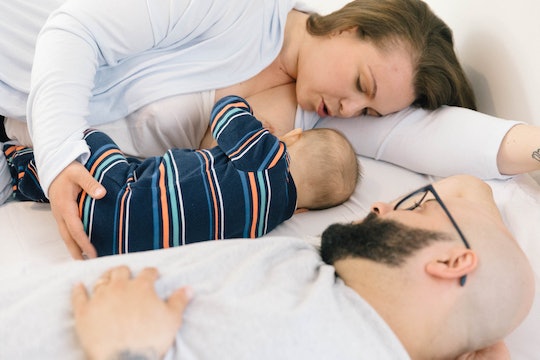 It's Men Who ~Really~ Suffer When Their Partners Breastfeed, Those Poor Things

I am not going sugarcoat things: breastfeeding is, at times, simply the worst. Now don't get me wrong, I loved snuggling and bonding with my baby, and it was pretty badass to produce food for another human being with my body. But after breastfeeding three babies, I can tell you that it also sucks, literally and figuratively. And not just for moms, either! Oh no, there are so many things most people don't realize husbands of breastfeeding moms have to deal with, too. For real, you guys, no one has heard their horrific stories of pain and exhaustion. That is, of course, until now.

If you've breastfed a baby, you probably know all about sore nipples and sleep deprivation, but did you know that husbands have to deal with these painful things and more when their wives are breastfeeding? More pain than we could ever imagine, ladies. My first husband learned so many painful lessons, in fact, that I'm just in awe of his non-uterus owning, non-childbirth experiencing, non-lactating self.

Like the time when he picked up the baby without a shirt on and she tried to latch on to his nipple. Worst pain ever, I'm sure. Or the times he struggled to cope with sleep deprivation when I accidentally woke him up while I was feeding our newborn three times a night. He must have been so exhausted, and hungry, because I selfishly chose to breastfeed our cluster-feeding baby for hours instead of cooking dinner. Can you believe I did that? I mean, I have no idea how he survived having to fend for himself like he's some adult, or something. And the pressure he must have felt for me to nurse, and also for me to cover up, when I breastfed in public. If there's anything worse than enduring the judgment of strangers, it's witnessing the judgment of strangers.

There are so many painful things he had to cope with when I was breastfeeding, and I had no idea he was suffering in silence. That is, of course, until now