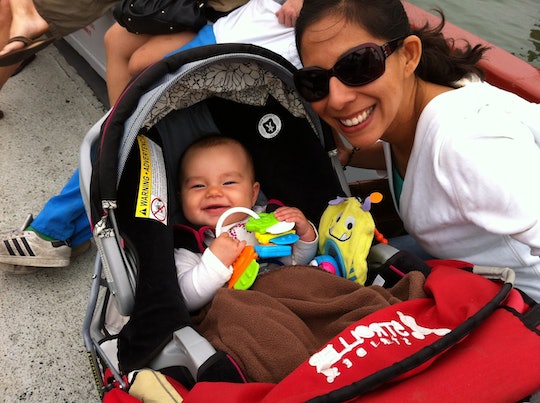 Many of the guidelines of attachment parenting just aren’t compatible with the demands or schedule of a working mom's schedule, and I base this observation solely on my personal experience as a working mom who both worked from home and in an office during both my oldest daughter’s first two years of life. Some of the Seven Bs were not affected by my work schedule — such as birth bonding and bedding close to baby — but many of the tenets of attachment parenting — breastfeeding, baby wearing, a belief in baby’s cries, being wary of baby trainers and balance — were impacted by my work schedule and eventually led me to either modify or completely abandon the philosophy altogether.

At the time of my daughter's birth, I was a journalist and managing editor of a news publication, which meant my days consisted of editing stories, writing stories, and managing layouts and other production issues. I was lucky enough to have the opportunity to work from home for the first five months of my daughter’s life, and then moved to working from home three days a week in her first year. Working from home allowed me the opportunity to breastfeed my daughter on demand through the workday, which is a major recommendation of attachment parenting. I loved being able to breastfeed her whenever she needed to eat, but that doesn’t mean it wasn’t difficult to balance her needs with those of my job responsibilities.

Every time that I breastfed meant that much more time spent away from the computer working on articles or making phone calls to sources, which meant I needed to work longer than my usual work hours to make up the time, and that led to me feeling completely burnt out. I eventually began to ask my mom to give my baby a bottle when I was feeling overwhelmed with trying to balance work and breastfeeding at the same time.

I really, really tried to love baby wearing. I researched the best wraps for hands-free breastfeeding so that I could work while my baby breastfed, but my daughter hated most wraps and would scream whenever I tried to breastfeed her and type. I tried several slings and by the time I heard about one I thought I might like, we were both completely over it.

I hit several roadblocks in my attempts to attachment parent, especially when I began to work in the office two days a week. In order to continue breastfeeding when I went back to working in the office twice a week and eventually full-time after one year, I pumped three times a day, but that also took time away from work. To make up for not being able to pump or nurse, I'd co-sleep with my daughter so that she could breastfeed throughout the night. Although I did enjoy co-sleeping with my little girl, it didn't make for a comfortable sleep at all, and most mornings I’d struggle waking up for work. On those days, I ended up downing at least two Starbuck venti-sized coffees per day. Eventually I began to split up the co-sleeping with the non-co-sleeping days so that I could actually sleep and be awake for work the next day.

Baby wearing is another mark of attachment parenting I attempted and ultimately gave up on after a few months. I really, really tried to love baby wearing. I researched the best wraps for hands-free breastfeeding so I could work while my baby breastfed, but my daughter hated most wraps and would scream whenever I tried to breastfeed her and type. I tried several slings and by the time I heard about one I thought I might like, we were both completely over it, which brought us full circle back to the original issue: on those occasions when my baby wanted to breastfeed and I was on a tight deadline, she got either a bottle of formula or breast milk.

Because I had to pay attention to my work, it meant making the decision to have my mom feed my baby a bottle instead of keeping her with me.

My second daughter did a little bit better in the Ergo baby carrier we bought, but she was only comfortable breastfeeding if I was standing up, which made responding to emails and writing a story difficult. I also tried to babywear my girls while I worked, but neither of them would have it. It was like the second they smelled me or touched me all they wanted to do was breastfeed. It just didn't work for me since I'm someone who needs to focus on what she's doing to avoid typos, false facts, or misquoted statements. Ultimately, it came down to this: Because I had to pay attention to my work, it meant making the decision to have my mom feed my baby a bottle instead of keeping her with me.

I also really liked the idea of not letting my baby cry it out, but when you’re trying to file a story at nap time and all your daughter wants is to be rocked because she refuses to go to bed on her own, you don't have many options. Responding to my daughter when she cried instead of allowing her to cry it out did not work out for me when I worked from home, and the main reason for that was because she'd be perfectly fine in the living room playing with my mom (her full-time caregiver), but she'd start to cry the second she saw me. There was no way I could interrupt an interview to go calm my daughter, so sometimes she had to cry it out. Thankfully, my mom provided plenty of cuddles and filled the "void" for wanted attention when I needed to work.

I also was not able to practice the attachment parenting philosophy that advocates against childcare for more than 20 hours a week for babies. I had to work and I needed to focus my attention on my job responsibilities, but my daughter could come in for a cuddle or comfort throughout the day if she needed me, but if I needed to work out in the field then I wasn’t a constant presence for her.

Even though attachment parenting was not a parenting style that worked for me as a working mom, I’m still glad I tried it out.