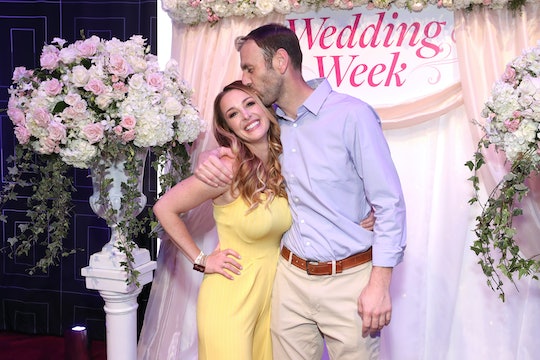 Jamie Otis Gets Honest About How Fertility Struggles Changed Her

I think it's safe to assume that all parents have a secret idea of how they think their journey is going to look, or at the very least a secret hope: That they'll get pregnant when they feel ready to have children, that their pregnancies will follow a safe, healthy path to completion, and their child will be born into this world without incident. This is ostensibly the hope of every prospective parent, but not everyone's reality, as Married At First Sight's Jamie Otis has discovered. Otis thought "having a family would be very easy," and women who have had trouble conceiving know all too well the pain of those particular dashed hopes.

The Bachelor alum and her husband Doug Hehner, who she famously married within seconds of meeting on Married At First Sight in 2014, have been struggling to grow their family of three. The couple welcomed their daughter Henley Grace in August 2017, and were delighted to discover they were expecting again in December 2018. They announced their happy news via their podcast Hot Marriage Cool Parents as per People, saying "We’re expanding the family. Jamie and Doug are now pregnant and we’re going to be parents of two." Sadly just 10 weeks later Otis announced via Instagram that she had experienced a "failed miscarriage."

Otis captioned a photo of herself snuggling in bed with her daughter:

Sorry I’ve been MIA, this very bizarre positive pregnancy test then negative test then faint positive lines gave me hope that Gracie was going to become a big sis in 9 months, but the night before last I began having terrible contraction-like pains & spotting. Then over the night full blown everything – if you know what I mean. I’m a nurse so I had my suspicions; but my midwife confirmed I had a chemical pregnancy. I don’t know why some people have it seemingly SO easy to get preggers & carry their babies to term and others struggle?

This was Otis' second miscarriage; back in 2016 she and Hehner had to make the painful decision to end her four-month pregnancy for their son because her body wasn't producing enough amniotic fluid to keep him alive, as per Woman's Day.

As Otis continues to raise her little girl with her husband and try to make the best out of a difficult situation, she admitted on the podcast Share Your Shine that she is having trouble coming to terms with the idea that having her family might not be so easy, as per People:

For me, I thought having a family would be very easy, so my own misconception about myself was [that] I would be able to have a family very easily. Come to find out, it’s not as easy… and come to find out, one in four women will have these same issues.

As hard as it is for Otis to come to terms with her trouble conceiving, she told Share Your Shine that she draws strength from the idea that she is not alone:

We all think we’re rowing in our own separate private boat when really we’re all together on this. We could be helping each other and supporting each other, but like, no one talks about it. We all feel like we’re stranded in our own boat in a blizzard. It’s just not the case.

Perhaps that's the only thing we can do to keep moving forward. Talk, listen, talk some more. And just keep breathing.