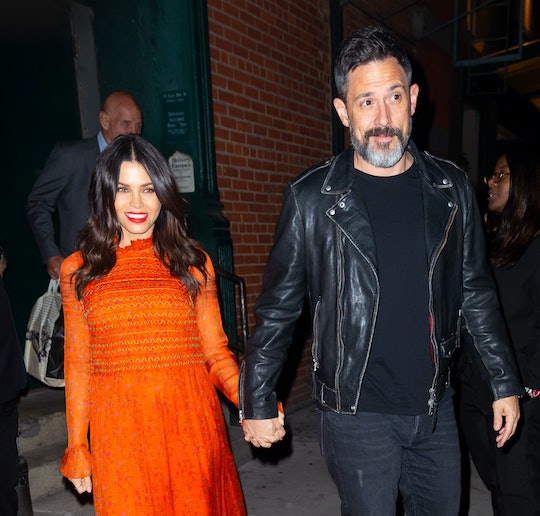 Congrats are in order for Jenna Dewan who announced the birth of her second child on Instagram today. The new mom of two shared a gorgeous black and white photo of herself holding her newborn son on her chest, looking so in love with her little boy.

"And just like that, our hearts exploded into all of eternity and beyond," Dewan captioned the birth announcement post on Instagram. "Welcome to the world you little angel!"

The 39-year-old actress, who shares 6-year-old daughter Everly with her ex-husband Channing Tatum, also announced that she and fiancé Steve Kazee named their family's newest addition Callum Michael Rebel Kazee. Although the new parents didn't share why they chose the unique moniker, a quick Google search shows that the name Callum is of Scottish origin and means "dove," which can represent love, peace, and luck in many cultures.

Kazee also shared a birth announcement on his Instagram on Tuesday. "In an instant our universe burst wide open and nothing would ever be the same," the 44-year-old actor and singer captioned a photo of his newborn son's hand holding onto his finger. "Welcome to earth star child."

Back in September, Dewan announced that she and Kazee were expecting their first child together. "We are beyond overjoyed and couldn’t be happier to be expanding our family!" the couple told People at the time.

About five months later, Dewan revealed that Kazee had popped the question with a stunning rock. "A lifetime to love and grow with you...you have my heart," she captioned a photo of them sharing a kiss with her engagement ring on full display.

While Dewan hasn't shared how her daughter Everly is adjusting to her new role as a big sister, she did reveal back in October that she was pretty excited about the gig. "[Everly] said she’s waited her whole life for a sibling," she told People in the fall, and now Everly's wait is finally over. As for Dewan and Kazee, it's safe to say they're officially smitten with Callum, their angel, earth star child.