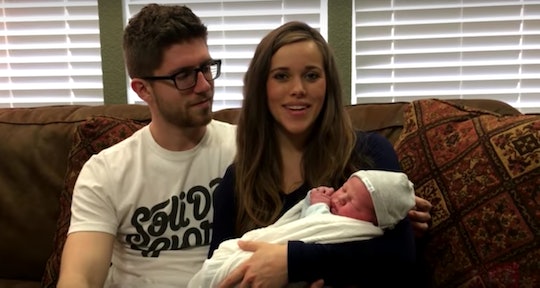 Jessa Duggar Revealed Her Son Has Eczema, & She's Getting *Lots* Of Unsolicited Advice

They may have only been young kids when their family rose to fame on their reality show, 19 Kids and Counting, but these days, a number of the Duggar siblings actually have children of their own. And while it might seem like their lives might appear to be bliss-filled depictions of marriage and motherhood, the truth is that, well, the Duggars actually have to put up with a ton of parenting-related judgment for what often seems like the silliest things. In the most recent episode of Counting On, Jessa Duggar revealed her son has eczema, according to In Touch Weekly, and even though it's not particularly uncommon, not contagious, and also something that many children eventually outgrow, Jessa hasn't been able to escape the inevitable wave of online criticism that seems to occur anytime she does, well, pretty much anything as a mom.

You don't have to be a huge Duggar fan to know that Jessa appears to be a magnet for viewers who feel the need to offer up their opinions on her parenting on social media. In the past she's been criticized for her messy house, for giving her son "popcorn" (it was actually a baby puff snack), and for letting her sons go barefoot (how dare she!). Now, she's also being judged for her son's eczema, and her social media followers are offering up all kinds of commentary about what believe the mom-of-two should or shouldn't be doing about it.

During Monday's episode, Jessa explained that she thought her 1-year-old son, Henry Seewald, had "cradle cap," a common and totally harmless form of seborrheic dermatitis, that causes rough, scaly patches to form on baby's heads, according to Kids Health. But when nothing she tried seemed to make it go away, Jessa explained she "started to figure it out that this was actually eczema and probably an allergy."

Infant eczema actually refers to two different skin conditions, according to What To Expect — atopic dermatitis, an inherited chronic condition that is usually triggered by an allergy of some sort, and contact dermatitis, which is a rash that occurs from exposure to something that is irritating to the skin (think soaps, creams, laundry detergent, baby wash, etc.). It can be hard to treat — and even harder to determine what's causing it — and it doesn't help that things like moisture (drool, sweat, spit up, whatever) can make it worse, as can overly-warm baths, irritating clothing, or any products containing any ingredients that could be triggering to sensitive skin (like fragrance).

In the episode, Jessa explained that "Henry has some pretty bad flare-ups on his head and in his neck creases" — a prime spot for infant eczema due to moisture and rubbing — and added that they "have to keep socks on his hands to keep him from scratching it." Though flare-ups can often be treated medically with topical corticosteroids or antihistamines, according to Kids Health, it can also help to try and figure out what specifically could be triggering them, so like many moms, Jessa said she was trying out an elimination diet to identify possible food allergies. She explained, "I’ve cut out all inflammatory foods: gluten, dairy, corn, nuts. It’s just a matter of figuring out what it is."

Even though it sounds like Jessa is taking her son's eczema pretty seriously, and doing everything she can to ease his symptoms, that didn't stop internet commenters from chiming in to offer all kinds of advice about what they believe she should try. In fact, even though she hasn't posted anything new on Instagram since February, concerned fans began leaving comments with their eczema advice on her last post (perhaps they assumed she just forgot to ask for their opinions?).

Some of the suggestions? One commenter wrote that her now 5-year-old son also struggled with infant eczema, and that she was concerned after she saw Jessa eating eggs during one Counting On episode, since "eggs can also be a huge [flare] up." Another shared that she "cut gluten, dairy and sugar" from her diet to ease her daughter's eczema, and that after they took her to a naturopath, they learned "all the lotions [they] were using bothered her, [and] she had a lavender allergy." Yet another commenter wrote that her son's eczema was due to "a wheat, egg and soy allergy," while a different commenter said the issue was a result of allergies to "milk, eggs, tomatoes, chocolate and to much acidy foods, also dust and grass." A number of others chimed in with lotion recommendations, one mom recommended Jessa try "salt baths," and another even recommended she give CBD oil a try.

Of course, the people chiming in with advice about allergies and moisturizer likely really are intending to help Jessa and baby Henry deal with a condition that can be super uncomfortable, not to mention mega upsetting for moms (my own son had eczema on his legs and face as an infant, and it broke my heart). But the thing about unsolicited parenting advice is that, well, even the most sincere recommendation can often come off as judgmental or critical when you're already feeling guilty over the fact that you haven't been able to solve the problem yourself. And even though Jessa specifically said on camera that she was already trying to address the issue through food elimination, the bulk of the comments were ones suggesting she try food elimination (clearly she's already heard of that strategy!).

Honestly, parenting can be really, really hard, and a lot of the time, we're just doing out best, and trying to figure it out as we go along. But when you're raising children in the public eye, the pressure to do things "right" (even when there isn't even one fully-agreed-upon right way to do it) has to at times feel overwhelming.

Jessa does at least seem to be pretty good at taking the internet commentary in stride though, and it also seems like much of the advice she gets is at least intended to be helpful. But the fact that she can't seem to say or do anything as a mom without having someone say something about it should maybe be a reminder that even the most well-meaning advice can feel judgmental to a new mom. And sometimes, the most supportive thing we can actually do is keep our opinions quiet unless we're specifically asked for them.