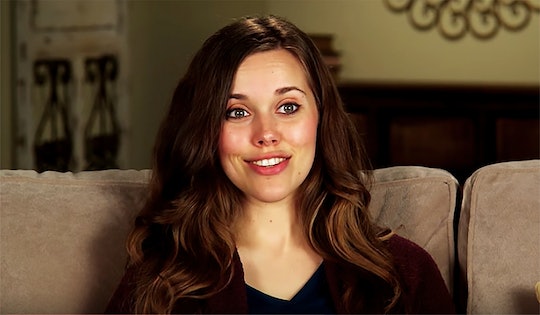 Counting On star Jessa Duggar is no stranger to pregnancy rumors. Speculation about baby number three (she is already mom to Spurgeon, 2, and Henry, 1) reached a fever pitch in March when Duggar was forced to confront the gossip head-on via the Duggar family's representative. Although Duggar's rep denied the reports at the time, some fans haven't learned their lesson regarding assumptions. In fact, a fan took to Duggar's Instagram account on Wednesday to congratulate her on her "3rd" baby. And if you're someone who finds all of these assumptions frustrating, you'll probably want to check out Jessa Duggar's response to a fan who assumed she's pregnant again. Not only did Duggar handle the remark with class, but she also highlighted her impressive knack for sarcasm.

A fan took to Reddit in February to claim they witnessed Duggar sporting a bump around Fayetteville, Arkansas. The author said they were at a "group play date thing" thing in the area when they spotted Duggar with a "noticeable baby bump," according to the Counting On Reddit thread.

The anonymous person went on to claim: " ... she had a noticeable baby bump. Her shirt was somewhat tight so it was obvious that she was pregnant and definitely past the stage of eating too much for dinner the previous night. She appeared about 3-4 months pregnant."

Spoiler alert: Duggar wasn't pregnant. Unfortunately for Duggar, however, the story took on a life of its own, and she had to address the gossip in March.

It's reasonable to assume the rumors got to Duggar because no person wants to have inaccurate information spread about them. Not to mention, it probably doesn't feel good to have strangers speculate about the appearance of your body.

But as much as these sentiments might seem obvious to most fans, some people have yet to realize it's rude to make assumptions about another person's reproductive choices. In fact, one person thought it was appropriate to congratulate Duggar on her "3rd" in the comments section of her recent Instagram post. "They are so cute!" the fan remarked on a video of Spurgeon and Henry playing in the dirt shared on Instagram. "Congratulations on you're [sic] 3rd!"

Duggar — who is not pregnant — didn't hesitate to reply. "Thank you! I didn't know I was pregnant," Duggar quipped.

To be fair, it's possible the commenter legitimately thought Duggar was pregnant. Duggar did just admit to having "baby fever," after all, and it's not like she doesn't want more kids one day. Still, the person probably should have checked for an announcement of some kind before sending the congrats.

It turns out upon further investigation, however, that the fan made the remark in an effort to apparently trick Duggar. "I haven’t read it anywhere, I was just making a joke, trying to see if she’d slip up," the person said in a response to a fellow commenter who wondered where they "read" the pregnancy rumor.

Um, say what now? It goes without saying that no one should be tricked into admitting they're pregnant — even if the joke is meant to be lighthearted.

The silver lining to this drama is now people know Duggar won't idly stand by while people make assumptions about her body. Nope, Duggar has plenty of sarcastic replies ready to go for anyone who tries to spread rumors about her supposed pregnancies. Get 'em, momma.