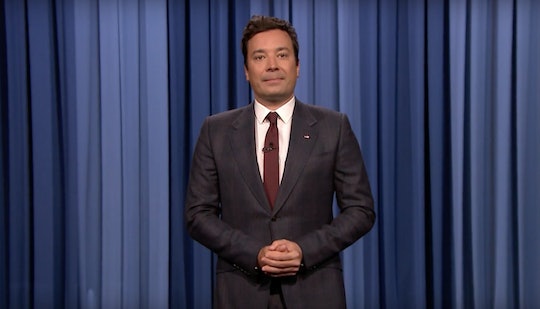 As America still reels from the horrific, racist violence that took place in Charlottesville, Virginia over the weekend, The Tonight Show host Jimmy Fallon opened his Monday night broadcast with a sobering, solemn monologue — and it was super important. While taking appropriate aim at President Trump's thoroughly tone deaf response, Jimmy Fallon's Charlottesville response offered a powerful message for parents. "Even though The Tonight Show isn't a political show, it's my responsibility to stand up against intolerance and extremism as a human being," Fallon opened.

Fallon is the father of two daughters, 4 and 2 years old. On Monday, he fought back tears as he spoke about how, as a father, he must make sense of Charlottesville for his daughters' sakes. "I was watching the news, like everyone else, and you're seeing Nazi flags and torches and white supremacists. I was sick to my stomach," Fallon continued. "My daughters were in the next room playing and I'm thinking, 'How can I explain to them that there's so much hatred in this world?'"

Fallon then called out Trump's delay in condemning the white nationalists responsible for Saturday's violence, calling it "shameful" and urging viewers to continue to stand up and speak out. "Ignoring it is just as bad as supporting it," Fallon said.

Speaking about his daughters and their innocence of not knowing what hate even is, Fallon said that parents, teachers, and "leaders who appeal to the best in us" are needed now more than ever. He's right: Since Trump was elected, racist incidents in schools have skyrocketed, according to Vice News. The Southern Poverty Law Center has even given the epidemic of racist incidents and fears from minority students in schools a name: "The Trump Effect."

Fallon's response echoed what many parents have wondered in the wake of Charlottesville: Do we tell our kids about it? And if we do, what do we tell them? How do we explain such irrational hatred? While Fallon didn't offer an exact play-by-play of how parents can talk to their kids about Charlottesville, he did emphasize that it's our duty as parents to teach our kids that racism is wrong, that what happened in Charlottesville was wrong, and even that how the president responded was wrong.

I can't look at my beautiful, growing, curious daughters and say nothing when these kind of things happen. We all need to stand against what is wrong, acknowledge that racism exists, and stand up for what is right and civil and kind, and to show the next generation that we haven't forgotten how hard people have fought for human rights. We can't do this. We can't go backward. We can't go backward.

Fallon's Charlottesville monologue has been largely well received, but there are critics quick to point out that Fallon normalized Trump's general awfulness to voters with his infamous "hair tousling" incident when then-candidate Trump appeared on The Tonight Show last September. Some have said that Fallon's response to Trump is too little, too late because of how his interview gave Trump quite a bump in the polls, according to CNBC.

Regardless, it's more important that people speak out against what happened in Charlottesville. Forget politics. Forget late night talk show antics. We need to speak out and stand up against racist hatred — and our kids need it now more than ever, too, just as Fallon reminded us.