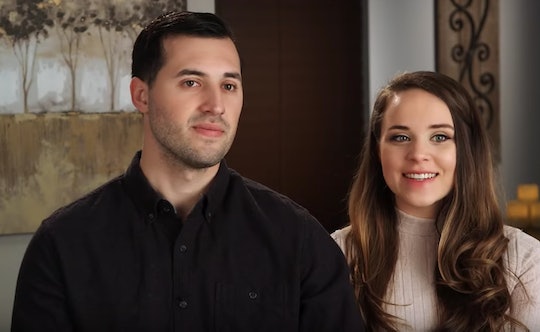 "That Was Not An Announcement":Jinger Duggar Promptly Shut Down Pregnancy Speculation

While Jinger Duggar comes from a large family, that doesn't necessarily means she's ready (or even wants) one of her own that big. The reality star and her husband Jeremy Vuolo currently have one daughter, an adorable little girl named Felicity, and during a recent episode of TLC's Counting On, Jinger Duggar shut down any possible pregnancy speculation before rumors could even start after a producer asked her to clarify a comment she made.

Over the past year, TLC cameras have documented some of Jinger and Jeremy's biggest moments, like when they moved from their home in Laredo, Texas, to Los Angeles, California, preparation for which was showcased on Tuesday night's episode of Counting On.

In the new episode, Jinger and Jeremy went house-hunting and shared their requirements for the perfect place for them: a good location with just two bedrooms for themselves and their 1-year-old daughter. Jinger explained to their producer, Scott, that living in a smaller home would be an adjustment. "Growing up I always had a lot of land around, I loved running on it, so it is going to be a challenge to raise kids in an apartment," she said.

Yes, Jinger said "kids," which is when the producer chimed in. "Wait," the producer said. "You said 'kids'..."

Considering the fact that people are constantly wondering if Jinger's pregnant again and speculating if (and when) she'll have more kids, it makes sense why she so quick to stop any sort of speculation right in its track.

At the moment, it doesn't seem like Jinger and Jeremy are in any rush to add to their family. In fact, during that most recent episode of Counting On, the couple struggled to find the perfect home that was big enough to house their family but also still in their price range. Adding one more kid into mix right now might make that search even harder.

But that's not to say that they don't want more kids in the future. In 2016, in fact, Jeremy told Us Weekly that he and Jinger have a deep love for children, and they want to have a few of them. "I definitely want to have children but not sure how many," he told the magazine at the time. "We'll have to see what the Lord provides." And Jinger has shared she has the same thoughts on the subject. During a 2017 episode of Counting On, for example, she said she would like to have kids "whenever", according to In Touch Weekly. "If the Lord would bless us with kids, it would be amazing."

For now, though, it seems Jinger and Jeremy are pretty content with having their one daughter. And if there's ever news to share about another bundle of joy on the way, they'll surely tell fans when they're ready.