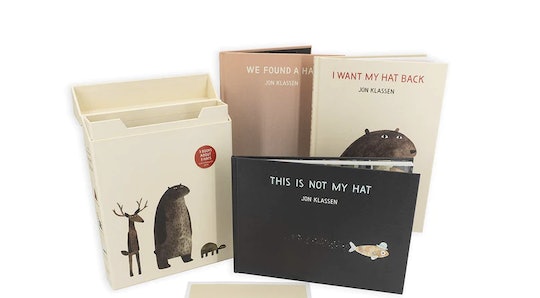 Have you ever come across a children’s book series that you enjoy just as much — if not more than — your kid? For me, it’s Taro Gomi’s books, as well as Jon Klassen’s hat trilogy, which includes I Want My Hat Back, This Is Not My Hat, and We Found A Hat. Adults love the beautiful artwork and deadpan sense of humor, and kids love being “in” on the jokes throughout the pages. Well, super fans of the series can now get Jon Klassen’s hat trilogy box set, which includes the famous trilogy in hardcover format and a framable print all in a beautiful deluxe boxed set for $35 on Amazon on Oct. 8.

So what is so special about this series and why should you absolutely get it for your kid? For one, it's just simple. Nobody's trying too hard in this series, and the simplicity is really what makes it so great. Two? It's hilarious. In I Want My Hat Back, a bear whose hat goes missing goes around asking all the forest creatures if they’ve seen it. It may not sound like much, but the deadpan illustrations can practically be felt on the pages. You know exactly what that bear is thinking and... well. You'll know exactly what that rabbit is thinking. Plus, This Is Not My Hat won a Caldecott Medal and a Kate Greenaway Medal, which are two respected awards in the children’s book industry honoring “prestigious illustrations” in books. So you know the artwork is absolutely beautiful and detailed. And We Found a Hat? Oh, it makes me cry every time I read it, so really, it's the ultimate trilogy.

Still not convinced of the goodness of these books. Well, there are almost 2.7 million copies of this hat trilogy in print in 27 different languages around the world — all about some “sly animals and their hats,” a press release noted. Obviously, these books are a pretty big deal and are very buzzworthy, so they definitely need to be owned in a beautiful deluxe set to pass down through your family, generation to generation.

Each of Klassen's books on Amazon have almost five stars each, and the reviews are overwhelmingly positive. One happy parent wrote, “This is one of those books that seems super simple and like it might get old fast but it just doesn't. Each time you read it, you see or think of something new. And for some reason kids are enthralled with it. We have gotten soooo many laughs out of this book.” That’s always the best when it comes to children’s books, isn’t it? When it doesn’t get old and repetitive like so many other children’s books can do?

The only negative review was from a grandparent who said she was “shocked” when she read it because it promoted “theft, murder, and revenge.” I think that’s a little over the top, but that’s just me. (Also, way to go, Klassen. It kind of feels like a score, right?) Another positive review said that the book series is most entertaining for adults. Someone else mentioned that they couldn’t believe there were any negative reviews about the series, and that she thought it actually teaches a “valuable lesson” about negative consequences for bad choices.

Klassen’s animation work can be seen in Kung Fu Panda 2 and Caroline, and his collaborations with award-winning children’s book author Mac Barnett include The Shape Trilogy: Triangle, Square, and Circle; The Wolf, the Duck, and the Mouse; and Sam and Dave Dig a Hole, among other award-winning books. And while this is Klassen’s first series of picture books where he is the sole author and illustrator, it’s definitely a classic that can be found in preschools, classrooms, day cares, and homes all over.

Whether you already own the series and it’s been “loved on” quite a bit, you’ve never read it before and want to add it to your kids’ collection, or you just want a nice version to give as a gift or to pass down throughout the generations of your family, be sure to be on the lookout for the box set. Do it for the hats.