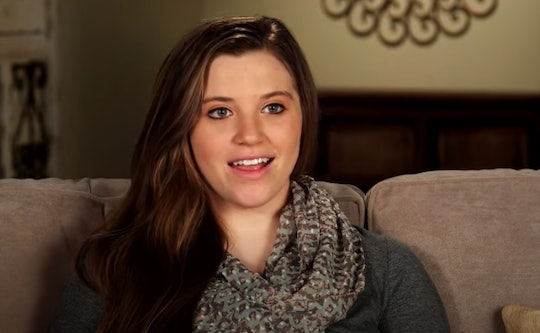 In the year 2020, I think people are finally waking up to the lifelong sorrow that a miscarriage brings. Even as life moves on, even if other pregnancies bring happiness, the loss of that baby is never forgotten. And as Joy-Anna Duggar's 1-year anniversary post about losing her daughter proves, it's possible to honor that memory in a way that is contemplative and thoughtful and loving.

It has been almost a year since the Counting On star suffered a miscarriage in July 2019 when she was just over 5 months pregnant. At the time, she and her husband Austin Forsyth, with whom she shares 2-year-old son Gideon, took to Instagram to share a powerful post about their loss. It seems the two had gone in for their 20-week ultrasound and there was no heartbeat detected. At the same time, they found they were expecting a daughter.

As Joy-Anna wrote at the time, "We named her Annabell Elise. Annabell means “God has favored me,” and Elise means “God satisfies."

Now one year later, Joy-Anna and Austin Forsyth are nearing the end of another pregnancy. They are happily expecting a baby girl, they are busy chasing around after their 2-year-old boy, and life looks pretty good.

But one year after her miscarriage, Joy-Anna took to Instagram to talk about "one year without her."

As Joy-Anna wrote in her post, "It’s been a year since we found out that we lost Annabell. I remember leaving our ultrasound appointment, sobbing and wondering how we were ever going to move forward, and so fearful of having to deliver her."

She went on to note that it "hurts to look back at these pictures and remember the pain and heartbreak, but when I do look back I am so thankful for how far we’ve come," concluding her sweet message with a reminder that "We love you Annabell Elise."

Joy-Anna clearly has room in her heart for the baby girl she is expecting in August as well as the baby girl she lost last year. She opened up about her excitement to welcome her second baby in a TLC video earlier this year, noting, "My heart is just going to melt as soon as I meet her. And I'm just so excited to dress her up in bows and fluffy dresses. It's going to be fun."

But amid all the excitement, she still took time to reflect on the baby she lost. Proving, yet again, that mothers have an infinite reserve of love for every single one of their children. No matter what.