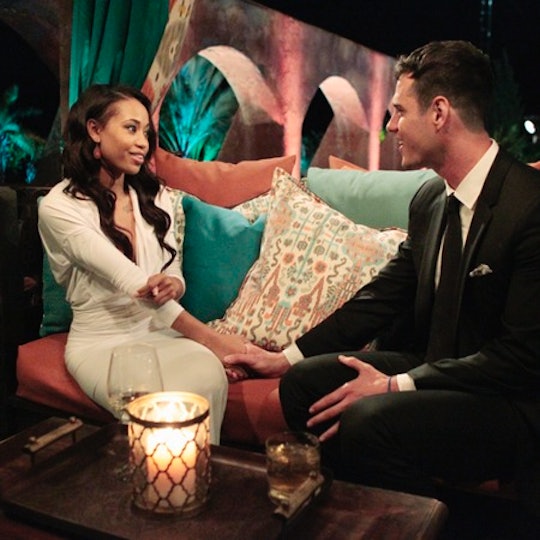 Jubilee's Revelation On 'The Bachelor' Was Upsetting, And Not Just Because Of What She Went Through

We knew that Jubilee Sharpe has life experience you don't usually see in a Bachelor contestant, but on Monday Jubilee's revelation that her entire family was killed in Haiti showed just how much she has been through. It also pointed to how much of their privacy individuals have to forgo on reality TV, and how uncomfortable that is to watch.

On a show known for featuring a mostly homogenous group of women — similar ages, careers, backgrounds — Sharpe, 25, stood out from the beginning of the show's 20th season as a welcome addition. She's a woman of color, for one thing, on a show criticized for its lack of diversity. She's also an army war veteran who served in Afghanistan, and we learned last week that Jubilee was adopted from Haiti as a child. Basically, Sharpe demonstrates far more strength of character that being a contestant on the Bachelor demands.

What she doesn't have, so much, is an ability to follow the usual Bachelor contestant script. As a result, on Monday's episode, her one-on-one date with this season's Bachelor, Ben Higgins, was off to a pretty terrible start. She called him out when he was late, expressed her terror when she was expected to go up in a helicopter with him (she's afraid of heights), and when they arrived at a spa for lunch, spit out her caviar. The first two moves wouldn't be faux pas in any other setting, but this is the Bachelor we're talking about. Two of the unspoken but also inviolable rules are A) you praise the Bachelor and treat him as mankind's most flawless offering at all times, and B) when he announces the uber-romantic naked-blind-spelunking adventure he is taking you on, you show only gratitude. (The caviar-spitting would have been bad wherever she was.)

So it wasn't going well. That changed, though, when Sharpe chose to reveal to Ben over dinner that she is the sole surviving member of her family, that they were all killed, and that she is the only one who can pass along her family line. It was a harrowing story; Sharpe claimed she experienced something no child, no human being should have to. But it was also harrowing for viewers to watch a human being reveal that information in the context of a reality show where contestants are more likely to complain about their cankles.

The problem is not that Sharpe wouldn't have relayed this information to Ben, or shouldn't have. She seems genuinely interested in Higgins, and she likely would have chosen to share these details of her personal history fairly early on in a relationship with him. It would be a defining piece of anyone's past. She also probably does have the fear of rejection she mentioned to Higgins and a desire to be loved for who she is that, well, everyone has. But the fact that the show is a televised competition — emphasizing to all of the contestants at every point that in fact, only one of them will end up loved for who they are — means that no exchange is private or disconnected from that competition. In Sharpe's case, it's possible that sharing her very difficult background on national television clinched her a rose, and that made it very uncomfortable to watch.

Of course, as soon as she spoke, Sharpe became the brunt of snide comments:

But possibly more upsetting is the fact that Ben, who seemed a little put off earlier on in their date, was suddenly holding her hand and giving her the rose. Her disclosure also resulted in an immediate flurry of positive attention on Twitter:

At the episode's conclusion, much of the chatter around it was about how Sharpe's story makes her an excellent Bachelorette candidate:

The message to Sharpe is clear: You are loved, or at least liked, when you're interesting. Which doesn't necessarily leave her that much closer to being loved for who she is.

Later in the episode, under attack from her fellow contestants, Sharpe recalled her date with Ben, "He told me it was okay that I'm a complicated person." But the fact is that everyone is a complicated person, and it was always okay. Sharpe shouldn't have had tell the most traumatic story of her life to millions in order to hear that.