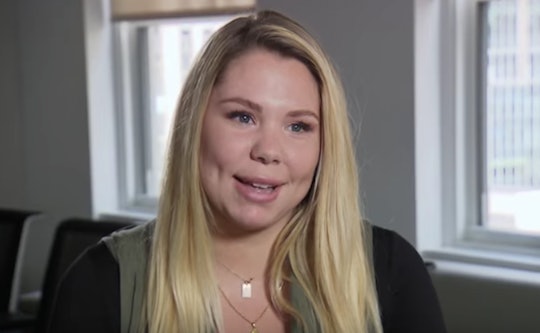 E! Live From The Red Carpet/YouTube

Out of all the Teen Mom 2 stars, Kailyn Lowry arguably catches the most heat from fans and fellow cast members. Unfortunately, the backlash recently intensified after Lowry gave birth to her third son, Lux Russell, and she has faced unwarranted criticism for her diverse and blended family. And on Saturday, Kailyn Lowry was mom-shamed once again (girl can't catch a break), and many people are understandably offended and frustrated by the reason why.

If you've been following Lowry's story on Teen Mom 2, you know she has gone through a lot this past year. From giving birth to baby number three in August to navigating her co-parenting relationships, Lowry has been one busy lady. And, on top of it all, Lowry has had to defend herself against numerous attacks from spectators on social media, including Teen Mom OG star, Debra Danielsen.

Danielsen, who also goes by the moniker, Debz OG and is the mother of Teen Mom OG star Farrah Abraham, took to Twitter on Saturday to comment on a tweet about Lowry allegedly going on "another" vacation without her three kids. Of course, one first has to wonder why it's newsworthy for a mother to take a trip sans children. If the implication here is that Lowry is a bad parent for traveling solo once in a while, it's definitely not cool. Parents travel alone all the time, and Lowry has a right to do with her time what she wants, especially when her critics are not affected.

Unfortunately, Danielsen seized the opportunity to further shame Lowry, tweeting, "I can't keep up with all of the baby daddys and girl friends! When does @KailynLowry find time for the children? Very confusing."

Danielsen tells Romper in a message: "My comment was not intended to criticize Kail. I was concerned for her. She has her hands full with 3 beautiful kids under 8. One being an infant. I read and see a lot of press and TV about her relationships. I know relationships (break-ups, divorce, and the like) put an emotional and physical strain on people in general. So I wonder how she is holding up under all of the pressure and strain from social media, relationships, and raising her children. Especially concerned given the recent news about Catelynn and her feelings of suicide. I wish her health and healing."

Welp, there's a lot of mommy-shaming to break down here. First off, there is nothing wrong or shameful about having multiple "baby daddies." To assume a parent is incompetent or irresponsible because their family doesn't look like your's is offensive and simply not true. Not to mention, a 2011 study found that one in five parents in America have children with different fathers, according to the Daily Mail. Translation: blended families are extremely common. If you judge a person by the fact they have kids with different fathers, then you're also making a sweeping generalization about a lot of people. Although it's reasonable to assume that co-parenting with multiple people can be a lot of work, I don't see how having children with different people leads to ineffective or neglectful parenting.

Additionally, why is dating as a single parent still so taboo? Lowry has dated a few people since divorcing her ex-husband, Javi Marroquin, and I haven't seen any evidence to suggest that it has negatively affected her parenting. In fact, Lowry's current girlfriend seems to be very involved in her kids' lives, which is a good thing. Lowry's girlfriend often helps out when she's doing press for TM2, and she regularly attends special family occasions.

In response to Danielsen's inflammatory tweet, Lowry said, according to InTouch Weekly:

Debra, don’t do that. You don’t know me. Call me whatever, but don’t ever question me when it comes to my children.

I believe you are a good mom. Just concerned about you.

Well, if Danielsen truly was concerned, perhaps she should have reached out to Lowry via a private message or text. Regardless, people quickly came to Lowry's defense following the back-and-forth:

I have to say, it's nice to see that most fans have Lowry's back in this feud. Not only is Lowry's personal life no one's business (yes, I know she's on reality TV), but it's also no one's place to judge a person's parenting based on their relationships. Blended families are common and beautiful. Hopefully more people will start supporting Lowry for the great job she's doing with her boys, because she totally deserves it.