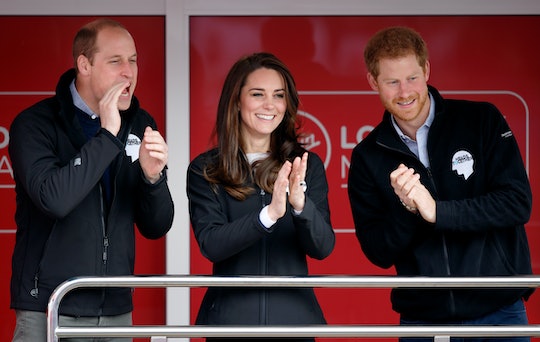 They might be on opposite sides of the world, but that doesn't mean they forgot about the Duke of Sussex on his special day. In fact, Prince William and Kate Middleton's birthday message to Prince Harry included a sweet throwback photo that's a reminder of their long, loving relationship. So maybe all of those royal critics can stop stirring up trouble and appreciate the bond they've shared for years, particularly Prince William and Prince Harry.

Prince Harry turned 36 years old on Sept. 15, his first birthday spent living in his new home in Montecito, California with his wife Meghan Markle and 16-month-old son Archie. Since he is so far away from the royal family and his birthplace in England and there is a pandemic preventing travel at the moment, his family can at least send their birthday wishes via social media. As his grandparents Queen Elizabeth and Prince Philip did with a Royal Family Instagram post featuring a photo of the Duke of Sussex laughing with the queen. "Wishing The Duke of Sussex a very happy birthday!" the caption read.

His father Prince Charles also took to his Clarence House Instagram account to share two photos of his son, one smiling on his own and another of the two of them laughing (I'm sensing a theme here). Prince Charles simply wrote, "Wishing a very happy birthday to The Duke of Sussex today!"

While these birthday wishes were sweet, they were a little formal. Not so with the message from his big brother and his sister-in-law. They dropped the "Duke of Sussex" title and just wished "Prince Harry a very happy birthday" with a photo of the three of them running a race together and looking like they're having the time of their lives. Prince Harry even looks as though he's winning the race, which I thought was a thoughtful touch.

The photo of the three of them running a race for their mental health awareness charity Heads Together is from February 2017, according to a tweet from the event, and a lot has changed since then. Prince Harry and Markle withdrew from their senior royal roles to live more private lives in her home state of California. Middleton and Prince William have been living away from Kensington Palace with their three children at their country home of Anmer Hall during the COVID-19 pandemic. Life looks very different for all of them.

But this picture is a reminder of the bond they share and the love they clearly have for each other. Prince Harry once said in an interview for the ITV documentary Harry & Meghan: An African Journey when talking about his relationship with his brother, "We’re certainly on different paths at the moment but I will always be there for him and as I know he’ll always be there for me... We don’t see each other as much as we used to because we’re so busy but I love him dearly." This birthday message feels like a reminder of just that. Brothers who are on different paths but love each other, dearly.