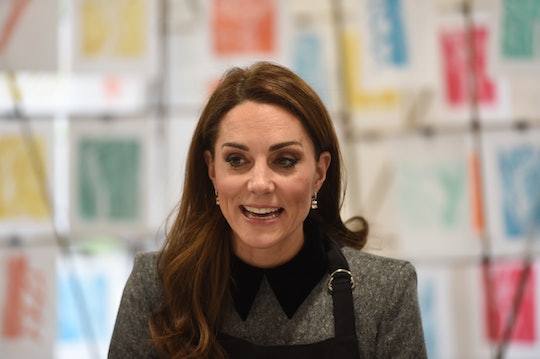 Kate Middleton Reportedly Focuses On This One Thing To Keep Sane

Last year was one of those "best of times, worst of times" situations for Kate Middleton. She welcomed her third child in 2018, gorgeous baby boy Prince Louis, but she was also subjected to some of the most intense scrutiny I think she's ever experienced as a member of the royal family. At least the most intense since her early days dating Prince William, then again after they married... oh wait, every year is like that for her. How does she stand it, you ask? Well, Kate Middleton reportedly focuses on one particular area of her life to help maintain her sanity in the palace, and it genuinely makes a lot of sense.

Kate Middleton has officially been the Duchess of Cambridge ever since she married Prince William in 2011. Since then she has given birth to 5-year-old Prince George and 3-year-old Princess Charlotte, as well as nearly 1-year-old Prince Louis, and her life has become fair game for the general public. Her every move is watched, it seems, every smile analyzed, every slight frown cause for debate. It's enough to make a person lose their grip on reality, and yet whenever Middleton has an official royal appearance she seems to remain as genuine and lovely as ever. Her trick? She stays focused on being a mother at her core, as royal author Duncan Larcombe noted in the new documentary, Meghan and Harry: The First 100 Days.

In the documentary, Larcombe noted that Middleton's "motherhood role" was the one thing that kept her "sane in the goldfish bowl of the Royal Family," as per The Daily Express. While Middleton has not confirmed this, she does make a point to carry photos of her children with her whenever she is away on a royal engagement, as noted by International Business Times, and she tends to bring them up in conversation during these visits, like the time she told fans that Prince George and Princess Charlotte love to make pizza or more recently, sharing the news that Prince Louis was getting ready to walk, as per Hello!. This proud mom always has her kids on her mind.

When Middleton is in London, both she and her husband Prince William make regular routine a priority for their children. They've both been spotted at Prince George and Princess Charlotte's schools doing the daily pick up and drop off, as reported by Hello!, and Middleton has been spotted out shopping for kids clothes and art supplies on more than one occasion, as per Elle.

It's sort of extraordinary to think that all of the regular, routine things that make so many of us mothers feel a bit bored and frustrated seems to be the one thing that helps Kate Middleton cope with being part of the royal family. The mundane normalcy. Eating pizza together, walking to school. Buying shoes and toys. I can actually see how this would be a wonderful anchor in a world that seems impossibly removed from everyone else. Because your kids are your kids, no matter what. They just need you to be you and they don't care about anything besides the fact that you're their mom.

Kate Middleton is on to something here, I think.