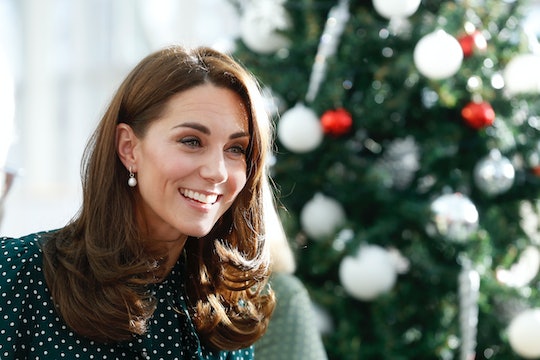 It's so easy to look at Kate Middleton and assume that life has been a breeze for her. She's beautiful, which tends to count as some sort of currency in the world we've created. She's cultured and charming, married to a future King of England, mother to three adorable little cherubs and almost uniformly beloved the world over. But our vision of the Duchess of Cambridge is clearly not her reality. In fact, Middleton reportedly switched schools as a girl for the saddest reason, one which seems to still carry weight with her even to this very day.

As many royal watchers are well aware, Middleton and her husband, Prince William, have made cyberbullying one of their main focuses of charitable work, according to People. Prince William's Taskforce on the Prevention of Cyberbullying, which was started in 2016, is supported heavily by Middleton. They both take bullying very seriously, and unfortunately they both appear to have rather a personal connection to the all too common school issue. Prince William, of course, had to deal with being bullied by the paparazzi as one of the most famous children on the planet. And Middleton reportedly switched schools at 14 because she was bullied terribly for being "too perfect."

When Middleton was a 14-year-old girl attending the all-girls private school Downe House in 1996, she apparently struggled pretty terribly with being bullied. A former classmate of hers, Jessica Hay, told The Sun that Middleton left Downe House partway through the school year because she was an "emotional wreck." Other girls reportedly bullied her, as Hay told The Sun, for the most ridiculous reason:

"She was picked on because she was perfect, well turned-out and lovely."

The bullying was so bad that Middleton's parents pulled her out of Downe House and moved her to Marlborough College. When she arrived, her house tutor Joan Gall told The Sun that the poor girl had broken out in eczema from the stress of being picked on, not to mention the fact that she was incredibly quiet and withdrawn:

"When she arrived she was very quiet. Coming into a big school like Marlborough was difficult, but she settled in quickly."

Middleton's experience with being bullied has stayed with her for some time, despite the massive fame and success she has achieved as an adult. When she and Prince William were married in 2011, they asked guests to donate to their charity of choice at the time, BeatBullying, and of course their work in the field of mental health awareness with Heads Together is quite famous.

I'm happy to tell you that Middleton apparently thrived during her years at Marlborough College, so much so that she is reportedly considering sending her oldest son Prince George to the boarding school when he is of age.

As awful as it is that Kate Middleton had to suffer through the cruelty of being bullied, I have to say I'm impressed that she has taken her own tragedy and used it to fuel important work in her own life. Because why not try to make sure no kid has to suffer again if you can?