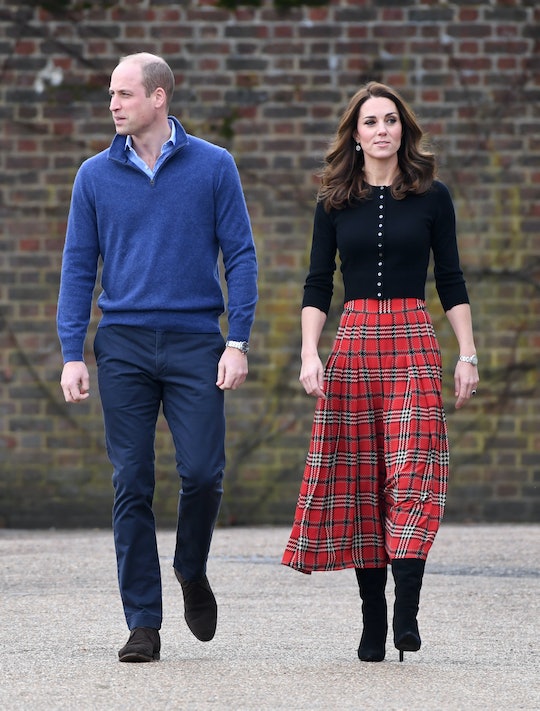 Kate Middleton might be the Duchess of Cambridge and the future Queen of England, but she's also a mom of three who just likes to hang out and do normal things. Actually, I might even go so far as to say that she might even prefer normal mom outings over her fancy Duchess outings with the tiara and the gowns and so forth. I have zero evidence to support this beyond the fact that she has often surprised people out in public by doing super average things. For instance, Kate Middleton strolled outside Kensington Palace with her kids on a day off from royal duties and tourists were just not ready for it.

On Thursday, the mom of 5-year-old Prince George, 3-year-old Princess Charlotte, and 8-month-old Prince Louis had a little time off. And how does a future Queen like to spend her leisure time?? If you were going to say trying on tiaras, you might be wrong. Middleton took her two older children out for a stroll outside the grounds of their London home, Kensington Palace, as Cosmopolitan reported. She was just a regular mom pushing Princess Charlotte in a stroller while Prince George was on a push bike. People who were visiting the area perhaps hoping for a little glimpse didn't know what to do with themselves.

These sort of surprisingly casual sightings of Kate Middleton have become something of a hallmark for the relatable royal. Just this past Christmas The Sun reported that the Duchess of Cambridge was seen doing some last minute shopping. She was reportedly with Prince George and Princess Charlotte the day before Christmas Eve at a discount store called The Range just outside of Sandringham Estate, where she spent Christmas was Queen Elizabeth. While she was obviously with a security detail, they were reportedly very discreet. So discreet, in fact, that one mother who was also there shopping didn't realize who she was at first, as she told The Sun:

I recognized little Prince George holding Kate’s hand and ­Charlotte with a red bow in her hair. Their protection officers were keeping a discreet distance so they looked like any other family out grabbing last-minute Christmas bargains.

For the record, she was apparently getting some art supplies and kids' books. Because she's a smart mom who knows how to keep kids occupied over Christmas holidays.

Both Middleton and her husband, Prince William, are devoted to making sure they are as involved in their kids' lives as possible. They are both regulars at school drop off and pick up for Princess Charlotte and Prince George, as per The Daily Mirror, so much so that the other parents apparently barely take notice of them. Not only does this say so much about them as parents, it also speaks volumes about the changing royal family.

After centuries of living as rather rarefied beings, I get the sense that this new generation longs for normalcy. And I think they're going to manage to pull it off.