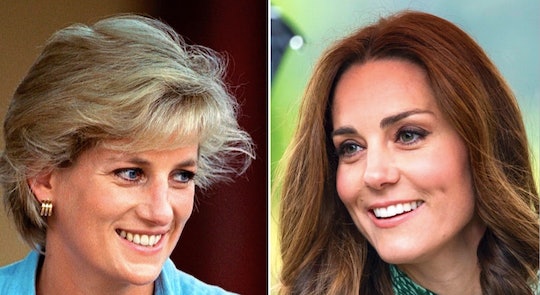 The Duke and Duchess of Cambridge dropped by a local hospital for a surprise visit earlier this week, looking happy and, of course, well-turned-out as ever. In fact, Kate Middleton even showcased a nod to Princess Diana with a navy patterned shirt dress that was a flashback to her late mother-in-law.

On Sunday, Middleton joined Prince William for a visit to the Queen Elizabeth Hospital in King's Lynn to honor staff members there who have been working throughout the coronavirus pandemic. Their visit was part of an anniversary celebration for 72 years of the National Health Service (NHS) in the United Kingdom. For the visit, Prince William wore a grey shirt with a grey jacket and a navy tie, while Middleton wore a navy dress with a white collar.

The dress was reminiscent of one worn by Princess Diana in 1985 during a photo shoot from her home at Kensington Palace, as INSIDER pointed out. At the time, she was mom to 3-year-old Prince William and baby boy Prince Harry. And she wore a mid-length navy dress with a white collar that looked super similar to the one worn by Middleton this week.

Middleton's subtle nod to Princess Diana's iconic style was especially sweet considering she would have celebrated her 59th birthday on July 1. Diana tragically died in a car accident in Paris, France in 1997. While Middleton might have chosen to honor Princess Diana's memory in style, Princes William and Prince Harry have reportedly usually chosen to mark the day with a private moment, according to The Daily Express. Although last year, Prince William surprised well-wishers outside of Kensington Palace who were holding a vigil for his mom by coming out and speaking with them at the end of the day, as the Daily Mail's royal correspondent Rebecca English reported at the time.

Of course, Middleton has a history of honoring her mother-in-law with her fashion choices. She has frequently worn dresses reminiscent of Princess Diana's style through the years, including another white-collared Beulah London dress during a Zoom chat in May, this time in a pink and red print.

As mom to three of Princess Diana's grandchildren, Kate Middleton is keeping her memory alive. One beautiful dress at a time.