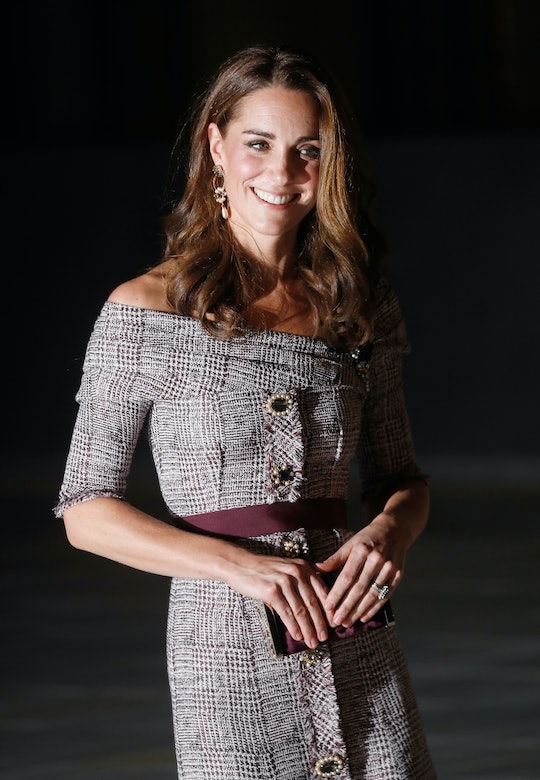 Now that Kate Middleton, Duchess of Cambridge's maternity leave is over, she has stepped right back into the spotlight, making royal engagements left and right. And unsurprisingly, her fashion game since returning to her royal duties has been as chic as ever. For example, this week, Kate Middleton wore an off-the-shoulder dress on a royal visit to a photography exhibit — and no offense to the museum, but her look was so fierce that it may have upstaged the art.

On Wednesday evening, the duchess visited the Victoria and Albert Museum to check out its new photography center, People reported. For the outing, Kate opted for an ankle-length purple tweed dress. The frock featured artfully unfinished edges, sparkly buttons from top to bottom, a dark purple belt at the waist, and, for the pièce de résistance, an asymmetric off-the-shoulder neckline. The dress was made by British designer Erdem, and it retails for £1,295 (about $1,708), according to The Sun. She paired the dress with ornate earrings, also made by Erdem, which retail for $440, People reported.

Kate matched her purple belt with a pair of plum velvet heels made by Jimmy Choo, Footwear News added. And in classic Kate fashion, she brought the entire look together with a clutch, opting for a small black box-shaped style with gold embellishments.

According to a post by Kensington Palace's official Instagram account, Kate's visit to the Victoria and Albert Museum was more than just a visit. The duchess actually opened the museum’s new Photography Centre, which now houses the the National Collection of the Art of Photography.

The exhibit is called "Collecting Photography: From Daguerreotype to Digital," and it showcases photos from the time the medium was invented (which was in 1839, according to Napoleon.org) up until the modern day, USA Today reported.

Kate was the perfect choice to help open the museum, since she is actually the museum's first Royal Patron, according to the Observer. Not to mention, Kate is a photographer herself. Ever since becoming a mom in 2013, the duchess has been responsible for many official royal portraits of her children.

That being said, Kate's experience with photography goes back much further than snapping portraits of her kiddos. Kate graduated with an honors degree in art history from the University of St. Andrews in Scotland, according to Biography.com. She also took the photos for her parents' party planning business, The Telegraph reported. The fact that Kate's passion for art goes back to her college days totally explains why she has such an eye for fashion.

Kate and Prince William, Duke of Cambridge, welcomed their third child, Prince Louis of Cambridge, this past April. Kate's appearance at the museum on Wednesday was her first solo engagement since returning from maternity leave least week, but her second overall. Earlier this week, she and Prince William attended the inaugural Global Ministerial Mental Health Summit, Hello! magazine reported. For the occasion, the duchess wore a lilac Emilia Wickstead dress, that she was also seen wearing in Germany in July 2017, TODAY reported.

It's so exciting that fans will be seeing more of Kate now that her maternity leave is over. Hopefully this doesn't mean her photography is taking a backseat though, because it seems about time for a new photo of Prince Louis.