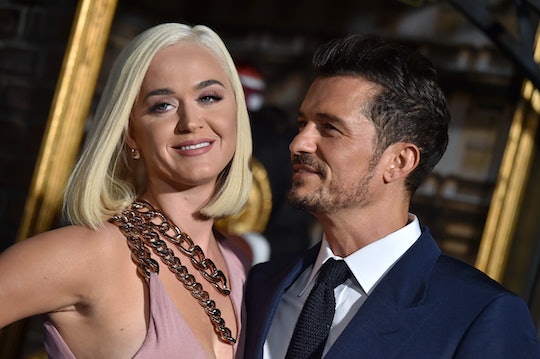 Election Day is less than a week away, so please listen to Katy Perry and Orlando Bloom's catchy little voting song to serve as a reminder that you really need to make sure your voice is heard in 2020.

Earlier this week, the "Smile" actress and her fiancé shared a rare video of themselves on Instagram singing a duet. The new parents of 2-month-old baby girl Daisy Dove (in addition to Bloom's 9-year-old son Flynn with ex-wife Miranda Kerr) sang a little ditty to remind everyone to vote this November.

The couple's song featured lyrics like, "Rise and shine and get to the polls now, vote in person and not with a mail-in ballot now," as most states require mail-in ballots to be postmarked by Election Day. Perry finished the song off by singing, "Now is the time to vote in person, person, people of the United States." I mean, it's no "Fireworks" but it gets the job done.

At the end of their sweet duet, Bloom noted that "this is for the future generations, by the way... this little ditty is for Daisy Dove," and the way his voice goes up when he says his daughter's name is truly precious. As is Perry's necklace featuring her daughter's name spelled out. As is the entire video, honestly, which Perry captioned, "mom & dad here reminding you that YOUR VOTE COUNTS! #votenow #bringsnacks 1866OURVOTE."

Bloom shared the same video on his own Instagram with the message, "Mum n Dad just sayin drop em off it’s too late to mail em in — it’s safe #wearamask bring snacks and a friend! #votenow have fun!" He also pointed out that, as a British citizen rather than a U.S. citizen, he can't vote but asked his followers to "do it for my Daisy Dove."

If their song sounded a little familiar to you, you are not alone. Perry commented on Bloom's post by asking Kylie Jenner to "come for us," perhaps alluding to Jenner's own internet famous version of "Rise & Shine" that she sang to 2-year-old daughter Stormi Webster in 2019.

Beyond being pretty catchy and a fun moment to watch on the 'gram, Bloom and Perry's voting song dedicated to their baby girl Daisy Dove is a lovely, lighthearted reminder of just how important it is to get out and vote.