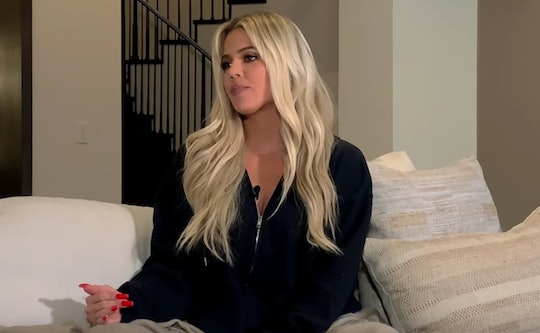 "I Was Under A Lot Of Stress": Khloé K. Opens Up About Struggling To Breastfeed True

Around the time she gave birth to her daughter nearly two years ago, Khloé Kardashian was dealing with a lot of stress, perhaps most notably surrounding her relationship with now ex-boyfriend Tristan Thompson, and it impacted her in many ways. As she shared in a recent chat with her sister Kourtney on her YouTube channel, Khloé said she felt stress ultimately impacted her breast milk supply.

"Pain wasn't my problem," Khloé explained to Kourtney about her experience with breastfeeding her daughter True Thompson and her decision to stop. "Parents go through pain for their kids, they don't care. It's more, I wasn't producing milk. I was like, 'Whatever is best for her.' But I understand. I was under a lot of stress, there was a lot going on in my life at the time, that I think played a part in why I wasn't producing as easily, but I don't know. It was just a lot."

Khloé welcomed her daughter on April 12, 2018 in Cleveland, Ohio, where Thompson plays basketball for the Cleveland Cavaliers. At the time, a video purporting to show Thompson with another woman at a bar was made public just days before she gave birth. And Khloé was learning of this and dealing with the aftermath away from her family.

Stress impacts you physically and emotionally in several ways, one of which is breast milk supply. "Stress can impact supply as part of the 'let-down' response of milk is related to hormones," Leigh Anne O'Conner, International Board Certified Lactation Consultant, explained to Romper in January 2018.

Khloé added that she felt bad about having to supplement her supply with formula. "I almost felt like I was smuggling drugs by feeding True formula," she said. In a June 2018 blog post on her now-defunct website, Khloé with a K, Khloé said that she was starting to supplement with formula and tweeted in July that she "had to stop breastfeeding" three months after giving birth to True. "It was really hard for me to stop (emotionally) but it wasn’t working for my body. Sadly," she wrote.

But once she was able to accept her decision, Khloé told Kourtney that she felt "safe" and wants other new moms to know that they're "doing an awesome job," no matter what. "I think attempting anything for the health and well-being of your child is beautiful," she said, "but I think the more pressure we put on ourselves to live up to some standard — it's unneeded stress and pressure."